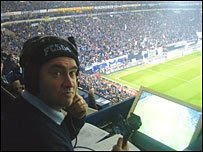 Fresh from helping Colin Bell with his autobiography, 'Reluctant Hero', the BBC Radio Manchester commentator and journalist has written 'Best Job In The World: From The Football Specials To The Press Box'.

The book tells the story of Ian's 40 years as a City fan, offering an insight into his journey from being a follower of the Blues to acquiring the job he always dreamed of. The book is packed with anecdotes and insights of the people he has met along the way and the games he has been to, both abroad and in England, and is told through the window of the 2008/09 season.

The release date is expected to be around the Celtic home game, on August 8th. Keep an eye out for further developments on it, including a possible supporter's club tour...with some familiar footballing faces...