Notes from the Editor- A New York State of Mind

A NEW YORK STATE OF MIND: MY TRIBUTE TO THE BIG APPLE


In a one-off departure from my football writing and with the 10th anniversary of 9/11 looming, I've decided to declare my love for New York City in a two-part special. I want to celebrate the Big Apple and share my memories of my time spent there in November 2002, little over a year after the atrocities 9 years ago.


For the ultimate experience of reading this article, please turn up the volume on your PC/laptop/iPad speakers and right-click here. Open the link in a new tab before returning to me and reading on. 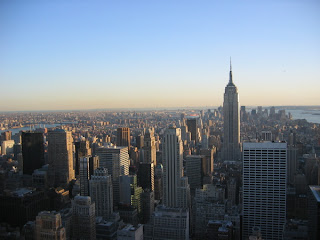 I’ve already spoken a lot about the love I have for New York City and everything it has to offer. When I left you in the previous article, I was two days into my holiday to the Big Apple back in November 2002. My Dad had treated me and my mum to a phenomenal trip to the city that never sleeps: we were staying in the Waldorf-Astoria and had already experienced crazy shopping hysteria, delicious eggs Benedict and a madcap journey on an open-top bus with a hilarious tour guide (I forgot to mention that last time, but the guy was a natural comedian). 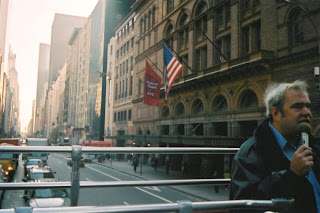 The comedian tour guide on our bus, Jeff

It was onwards and upwards with our enthralling adventure. Our first stop every morning was always the safety deposit room at the hotel: here we were greeted by a larger-than-life, bubbly Afro-Caribbean lady who used to say how cute I looked in my little hats and co-ordinated outfits. I used to look forward to the daily visits for a combination of the compliments and her infectious personality- first thing in the morning she was more effective than a couple of shots of espresso! Me and Mum wanted to take her home with us in our suitcase (in a non-creepy way!) 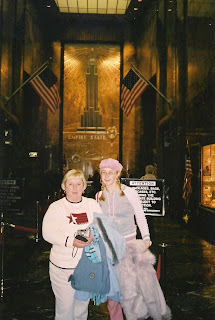 After she’d handed us our dollars and travellers cheques it was off to our first landmark of the day- the Empire State Building. Unfortunately that day was really dull and miserable, it was constant drizzle with a grey cloud lying flat over the city, but it didn’t deter us nor take away from the experience. As I stood at the top on the viewing deck, it immediately made me think of ‘Sleepless in Seattle’. I’m such a softy. I thought of poor Jonah leaving his bag at the top only for Meg ‘Annie’ Ryan to find it and find fate with Tom ‘Sam’ Hanks, who doesn’t love that kind of romance? We took plenty of pictures before heading to the lift, which was crammed full of tourists of all different nationalities. Despite the crowd, the journey down from the 102nd floor was in silence, until some bright American spark on the way down decided to ask: “Wow, imagine what it would’ve been like on 9/11 to be stuck in a lift like this when the plane impacted?” The many tourists simply looked around, gob-smacked. I’ve never wanted a lift to move quicker in my life. Thanks for encouraging our paranoia with that unnecessary comment random American! 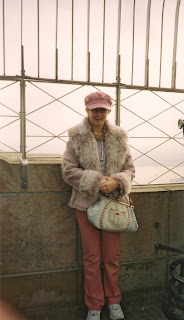 Top of the Empire State Building- don't look down!

The Empire State Building housed another attraction that we were quick to go on: the ‘Skyride’. The Skyride was a flight simulator of an erratically-flown helicopter around the city, with a cheesy man narrating the journey. I have to say, I was really enjoying it- until the Twin Towers came into view. The man gasped, saying how beautiful they are as the helicopter continued towards them...and didn’t stop. The simulator jerked violently as the ‘copter appeared to be heading straight for the South Tower. The cheesy tone from the narrator’s voice had been replaced with faux panic. Beeping shrieked from the speakers as the captain said: “Oh my gosh, we’re heading straight for them, we’re going to crash into them, brace yourself!” The screen was filled with the famous silver steel of the Towers. At the very last moment, the ‘copter veered away from the skyscrapers. 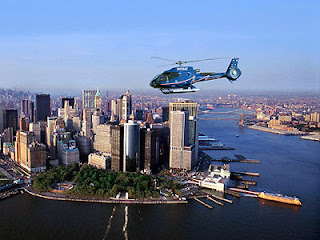 Simulating hell on the NY Skyride


I can only guess that the ride’s content hadn’t been altered since 9/11 as me and mum exited the ride with tears in our eyes. I felt physically sick. There hadn’t even been so much of a warning that the Towers would even be featured within the simulator, never mind show a disturbing reenactment of that tragic day. It may sound quite petty, but that experience is something that has lived with me ever since. We were both genuinely traumatised by the ride, it seemed so absurdly insensitive. But despite the drama, we continued on with our day and headed downtown to Battery Park and the Statue of Liberty.

Another surreal element of New York City is that there seems to be pretzel and hot dog vendors on the corner of every block. The smell of fried onions and nuts filled the hazy air and at Battery Park we couldn’t resist giving into temptation and enjoyed our snacks en route to the ferry. We passed the Sphere, a brass monument that used to stand in the World Trade Centre plaza and had been relocated to the park having survived the attacks, albeit tarnished and tattered. An eternal flame sat beside it, reflecting hope and displaying a tribute to the lives lost. Squirrels jumped about around us, hunting for loose nuts abandoned from the vendor. 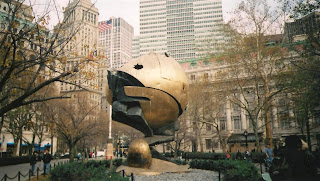 The Sphere in Battery Park


The Statue of Liberty was still closed after the attacks so we couldn’t go inside, but it was truly incredible to stand below the world’s tallest statue. Lady Liberty herself was majestic in every sense of the word- and the views of lower Manhattan from Liberty Island were spellbinding. With time ticking on, we ended back across the Hudson River for our next stop, Ground Zero. 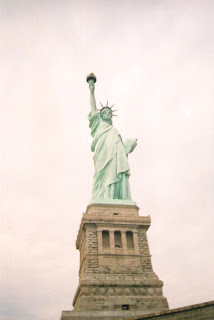 I knew roughly how to get to the site from Battery Park but unfortunately I didn’t need to follow a map to get there. I followed my nose. As we approached the site, the smell in the air was both repelling and pungent. The only way I can describe it was sickeningly foul, a mixture of burned and rotten flesh. I sobbed as I surveyed the scene; the area itself had been cleared of rubble but the buildings surrounding the site were untouched. Some had even been covered in huge strips of black fabric in an attempt to hide the many broken windows and crumbling concrete. It was a disaster zone. The buildings were falling down, you could see that every single window in every building was smashed and the places desecrated. The sun had started to go down as we stood reading the makeshift information boards that had been put up on the nearby metal fences, relaying the information from that day. 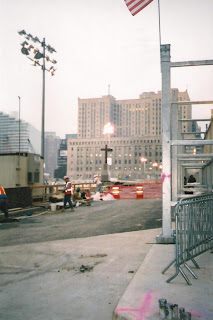 I didn’t know what to expect really from visiting Ground Zero. As the day turned to dusk, the scene became eerie, haunting and, incredibly, even more desperately sad. I looked up to the sky and tried to imagine what used to inhabit that space. I could picture the once-magnificent architecture of the giants of the sky but sadly the images in my head were of television images from that day, images of planes, fires and pandemonium. I think it takes going there to really appreciate how it feels, to try and conceive what went on that day and to endure the feeling of genuine terror that would’ve gone on in that spot on that day. We stayed for about half an hour and cried throughout that time. People there were just holding each other and crying, it was probably the most desolate and grave feeling I’ve ever had. I was filled with desperation and emotion. 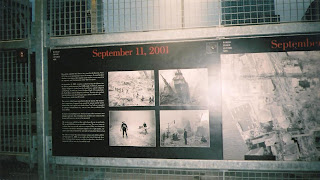 It was difficult to go from experiencing something like that to getting the day back on track and enjoying ourselves again, but somehow we did. Next to Ground Zero was Century 21- Carrie Bradshaw’s favourite designer outlet. It was kind of an upmarket TK Maxx with bargains galore, if you were prepared to root. We rummaged through there before jumping in a taxi and heading back to the hotel. After a quick change we decided to get a limo and headed mid-town to Britney Spears’ restaurant at the time, Nyla. For some reason, we were ridiculously convinced that we’d see the pop star (needless to say we didn’t) and after a mediocre meal it was onto Broadway to watch Titanic star Billy Zane play Billy in Chicago. The cherry on the top of the most wonderful evening was walking out after the show into Times Square. It was after 11pm and the neon lights really were blinding, it was so hectic and full of life. It was captivating. I didn’t want to leave, I just wanted to stand there and absorb the atmosphere, the craziness and the quirkiness that surrounded me. 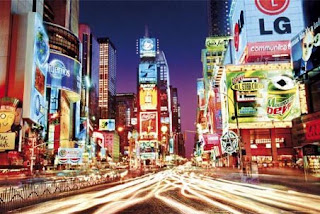 We spent our last day on the island having a wander around the Upper East Side (couldn’t resist another trip to Bloomingdales) and enjoyed a spot of afternoon tea in our hotel. Before we knew it, it was time to go home. Although my suitcase was full to bursting with the amount of clothes I’d purchased along with a plethora of trashy-yet-adorable souvenirs, I felt like I was leaving a part of me behind. I got home to my bedroom in same old England after an eight-hour flight and cried. I was in mourning for at least a week. I missed looking up at buildings every day and being dwarfed by their height. I missed the smelly food vendors, the infectious and smiley New Yorkers who served us in every place where we ate, drank and shopped. I missed the constant beeps and sirens that echoed around the city morning, noon and night. I missed New York City. 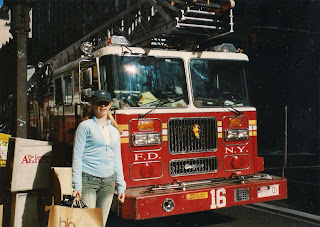 It’s safe to say that I left a big piece of my heart in Manhattan. The love I have for the city isn’t the weirdly absurd love like the woman who loves the Eiffel Tower, that’s Objectum-Sexual love. No. My love is much more innocent and pure than that. It’s a remarkable affection for a place in the world that I went to all bright-eyed and bushy tailed. A place that captivated me, thrilled me and continued to surprise me. I wasn’t lucky enough to visit the Big Apple before 9/11 but the city still worked its magic on me. The big lights did inspire me. I felt there was nothing I couldn’t do. For me, there is no place in the world that can compare to the larger-than-life city with a spirit that will never cease to diminish- or amaze. Let’s hear it for New York- who wouldn’t want to wake up every day in the city that doesn’t sleep?
Emily