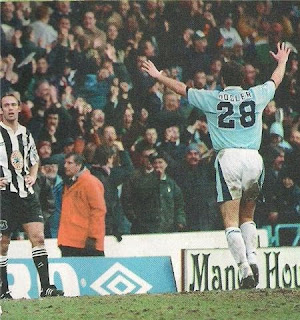 He's one of Manchester City's most popular imports. He won the Blues' 1994/95 Player of the Year award, his name is synonymous with the Pet Shop Boys' song 'Go West' and he's just been inducted into City's Hall of Fame. Football Pundette grabbed a chat with Uwe Rosler to discuss his career, health and future as a manager in English football.

FP: What made you want to become a footballer?
UR: Good question. I come from a small village called Altenburg and my dad was heavily involved in football at a local club in a very low league system. He took me on the field every single day and on the weekends to the games when he was managing. I guess that’s where everything started.
FP: Brian Horton originally signed you from Dynamo Dresden. When Francis Lee came in and appointed Alan Ball as manager, how much did this affect you as a player?
UR: I’m very thankful to Brian Horton and also to Francis Lee that they gave me the chance in English football, especially because I was so successful for the side. I played with some great players and learned a lot from players like Paul Walsh, Steve McMahon, Peter Beagrie and Niall Quinn. But then the club decided to go and appoint another manager, this is when Alan Ball came in. Like with every managerial appointment, the new manager came in and things changed. The way that we played changed and he introduced new players. Things changed a lot.
FP: What’s your favourite memory of your time at City?
UR: I think my first goal in English football against Ipswich, we played away and I scored my first goal there. The four goals I scored in the Coca Cola Cup against Notts County, that isn’t normal, you don’t do that kind of thing every weekend!
We also played a game in the F.A. Cup against United: we lost but I scored a goal and the atmosphere that day was phenomenal. There were 10,000 City fans at Old Trafford that day and the atmosphere between the two main rivals was electric. That was a memory that will always stand out for me.
FP: Which goal do you regard to be the best goal you scored at City and why?
UR: Wow, I scored a few. I think the chip over Peter Schmeichel in that F.A. Cup game was a nice goal. It was an important goal on a big occasion. Georgi Kinkladze provided the through-ball for me and I benefitted from him a lot, he had such an eye for a great ball. He saw my runs and he was a very good player who made me look good. 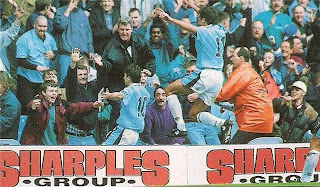 FP: Who did you regard to be your close friends at City?
UR: I had a very good relationship with most of my team-mates and people who worked at the club. I played alongside Walsh and Beagrie and I still have contact with those two today. I was very privileged. I learned a lot from them. Bernard Halford took great care of me over the years. He’s always invited me over. There are many people that I have a great respect for working in the club and who have left the club. I will always call Manchester and Manchester City my home.
FP: What has been the highlight of your playing career?
UR: It would definitely be playing in England. I came over as one of the first Germans: there was not many Germans after Bert Trautmann so I was the first that had come over for a long time. I had reasonable success. That was a big achievement. Afterwards, more and more Germans came into English football. Obviously, also playing for my home country, East Germany, and playing for Kaiserslautern in the Champions League are other highlights too.
FP: Do you think that any modern players wear the shirt with the same pride you showed whilst at City?
UR: It’s unfair to ask me that question. I think every player that goes out 20 years, 10 years ago and today want to win, they want to do well. I think that won’t change over the years. 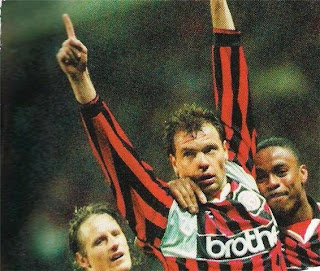 FP: Are City a club that you still have a high regard for? Do you think the club has what it takes to challenge for the Premier League title?
UR: Without a doubt. Manchester City is a club where I feel at home, I like to come over here and obviously people make me feel very welcome. It’s a very good feeling for an ex-player to go back to an old club and see that people really care about you. The way they supported me through my illness, they have been fantastic support for me and helped me so much through a really difficult period of my life (Uwe had cancer of the throat and, after treatment, has been successfully given the all-clear).
Now is an incredible time to be a City fan. We have the chance of a lifetime with the new owners to establish City where we belong, at the top of the league in English football. The supporters, who have supported this club for so many decades without winning, they are so hungry to win something. These great supporters deserve to see this incredible club win something in the near future. I think now with the new owners, the finances and our superb youth academy, who is leading in English football by producing young players, we will succeed. We also have a manager who knows all about winning. Mark Hughes is a winner; he’s played for great clubs and has good experience as a manager. He will definitely guide us in the right direction.
FP: Would you rather have played when you did, with the likes of Kinkladze, or now at City?
UR: One of my principles is that you can’t compare teams from different decades. I had my time. I was very privileged to play for a club like City. I was very privileged to pay with the players that I had around me. I enjoyed my time and I learned a lot from managers at that time. I’m definitely not looking to compare these times that I had with the times today. I was happy with my time and I look back with great memories. That’s the way it should be.
FP: You have managed both Lillestrom and Viking FK. Would you ever consider returning to England at some point in your managerial career?
UR: I was very lucky as a young coach to manage two big clubs in Norway, Lillestrom and Viking FK. But it’s now time for me and my family to make the next step. Where that will be I don’t know. I would like to return to the United Kingdom, that is an option, but I’m also realistic that to get a job in English football is very difficult. You have to know the right people and be there in the right place at the right time. Hopefully I will get the chance to prove myself and what I can do as a manager in English football.
FP: Lee Crooks, a former team-mate of yours from City, would like me to ask you if you still have the jumpers you used to wear from your days at City?
UR: (Laughs). When I came to City it wasn’t a long time after the Berlin Wall had come down and I still had a dress code from East Germany. I feel like some of my team-mates still have these memories about my dress code. Over the years I have learned a lot so you can tell him I learned a lot about what to and what not to wear! (Laughs heartily).
2 comments: