KING OF THE KIPPAX COLUMN - JANUARY 2022

STOP CRYING YOUR HEART OUT 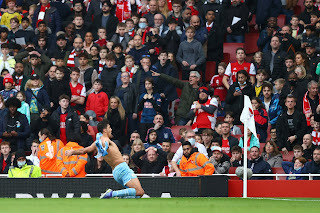 I can’t believe they’re still talking about it.

By them, I’m sure you’re aware that I mean Arsenal fans. By the time that King of the Kippax goes to press and you’re reading this, they’ll probably still be talking about it.

Oh the injustice. New Year’s Day 2022 – the day when Arsenal turned up for 45 minutes against City and gave us a really good first half - but didn’t win and have cried about it ever since.

I’ll take you back to December as a whole. City, with a jam-packed schedule, still had players missing due to injuries and Covid. But, unlike other clubs and managers, did no complaining and just cracked on with it. Head down, professional and, not only did they play each and every game, but they also won the lot.

Admittedly, Brentford felt more like a battle than the previous fixtures. In a weird way, it almost felt like a cup tie, but an early Phil Foden goal was enough to give us all three points. But it definitely felt like a scrap.

And then came Arsenal away.

There had been a feeling like that match would be the hardest one of the festive fixtures. Arsenal, doing well under Pep’s protégé Mikel Arteta, were flying relatively high in fifth place. The game was coming just three days after that tricky tie at Brentford. Between the fixtures, Joao Cancelo had been attacked by intruders at his home whilst he was trying to defend his family – yet still was included as part of the travelling squad to the Emirates. Arteta, however, would be missing due to Covid, so his assistant Albert Stuivenberg took charge in the dugout.

I don’t know what gives Arsenal fans the guile, or the audacity, to be so inexplicably outraged at not winning the match. How can anybody be that entitled? The reaction since the game, or should I say overreaction, has been nothing short of outrageous. As far as I’ve known my entire life following football – the team that scores the most goals, wins the game. We’re back to football basics here.

I did say to my boyfriend at one point during the second half – if we go on and win the game from there, it’ll be absolute mayhem. And it was. But you cannot just turn up for 45 minutes against one of the best teams in the world and think you’re entitled to win the game. Life and football doesn’t work like that. They looked the brighter team during the first half – I make no bones about that. But a culmination of different events led to Arsenal losing their heads, their discipline and their way.

Once Gabriel had seen red for his second bookable offence, we dominated and the winner looked inevitable. Wave upon wave of attacks came over and over again and, at one point looking at the clock, I started to think it wasn’t going to happen. 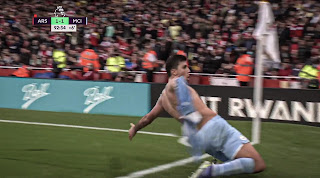 Deep into injury time, it was Rodri who grabbed the winner – and subsequently let the City players in a frantic, euphoric celebration in front of the home fans, like something straight out of the Emmanuel Adebayor archives. Debris rained down on the jubilant huddle – everything from bottles to toilet rolls, Arsenal fans made their feelings very aware. But the win was secured. City’s persistence had kept their winning run going – and extended the lead at the top of the Premier League table to 10 points.

Let’s be abundantly clear here. Arsenal had the chances to win the game – they just couldn’t find the back of the net more than once. Wasteful with their efforts, the Gunners lost all discipline once they went down to 10 men. The source of most of the outrage, the VAR decisions, were both correct in their outcome. Stuart Attwell chose to trust VAR when it came to a first half collision between the onrushing Ederson and Martin Odegaard – and when the VAR replays show the incident slowed down, you notice two things. Odegaard has his foot on Ederson’s and Ederson got the ball. So, correct decision.

The second one was between Granit Xhaka and Bernardo Silva. Bursting into the box – Xhaka attempted to stop Silva by sticking his leg out, and then, by pulling his shirt. The Portuguese midfielder eventually goes down – and this time, referee Attwell consults the pitch side monitor to decide the outcome. Once again, they are two key elements here. The leg from Xhaka and the clear and obvious shirt pulling on Bernardo.

There can therefore be no complaints whatsoever from Arsenal fans. It’s rare that City actually come out on the right end of VAR decisions. Since it’s inclusion, we can be rightfully aggrieved of many injustices at the hands of VAR – but this time, the correct decisions were made. So why all the outrage? Why the condemnation? Why the holier-than-thou response and attitude that made Arsenal fans so adamant that they should’ve won the game.

Take your chances. Keep your heads. Play to the whistle. This isn’t rocket science. If they would’ve done that, it may have been a different story. But it was City who rightfully got the win. An old football cliché talks about a team’s ‘character’, but in this instance, we really did see a gritty, ground out victory from Pep’s men. Call me crazy, but sometimes there’s a greater satisfaction with a smash and grab win – especially with a last-minute winner that’s celebrated in front of the home fans. This is elite level shithousing as we call it – City kept going, didn’t give up, refused to take no for an answer. We’re so used to watching majestic, breath-taking football from the Blues. While that’s nothing but a delight to the eyes, you’d be lying if you didn’t love a late winner that we all do delirious for.

I guess it should come as no surprise that City have somehow been painted as the bad guys yet again. I spoke in KK282 about the many peddled myths about the club and spent almost 5000 words dispelling each and every one. But the backlash this time really is tedious. I won’t mention the name of the comedian that went on a podcast and slagged us off with an entirely hypocrital and racist rant, he’s had far too much coverage ever since (I’m sure others will have done throughout this issue). But it’s the tip of the iceberg.

Of course, it’s all down to sour grapes. A very petulant bout of feet stomping, dummy spitting and toys out of the pram. So imagine my jubilation when Nottingham Forest beat Arsenal 1-0 in the third round of the FA Cup. Petty perhaps, but further proof that sometimes people really should let the football do the talking. I respond online to all of this usually with heavy doses of sarcasm – GIFs, photographs and memes. Mostly facts too - because nobody can deny them and people don’t like to hear the truth when confronted with it. Sometimes, as painful and as restrained as you have to be, it’s often best to try and be the better person and not get bogged down in tit for tat Twitter scraps with rival fans. It can take a lot to be the better person, but it’s worth it to not look like a complete and utter t**t. See the comedian above for example.

Let’s stick to the positives. City are still in three competitions – but the main thing is leading the race for the Premier League table ahead of Chelsea by 10 points and Liverpool 11. It’s a formidable position to be in half-way through the season – having played most of our tough games away from home too. I went on Five Live recently with fans of both Chelsea and Liverpool and they both all but conceded that the title race is over. I was much too humble and pragmatic to admit that the sky blue and white ribbons would be staying on the trophy for a consecutive season, but there was something exciting about hearing that both of our closest rivals thought the best option for them was to concentrate on other competitions. In a way, I think going out of the Carabao Cup early this season may have done us a favour – less games than them both, with more of an emphasis on the Premier League. It’s the one I always love to win. I would love to see us do it for the fourth time in five seasons.

It’s a long way between now and May, but the key element is always consistency and momentum. If we keep that up – Jack will be having a party against his old club on the final game of the season.

Now you can file that under ‘things I’ve love to see.’