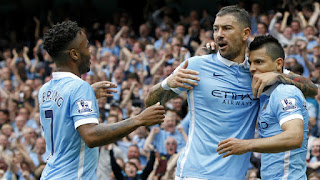 As Everton fans left Goodison Park after watching their side get beat by Manchester City 2-0, they were in no doubt by what they had just witnessed. ‘They were awesome weren’t they,’ one fan said. ‘Quality all over the pitch,’ lamented another. ‘Aguero is boss.’ The compliments continued until reaching the car. Somebody, it seemed, had made quite an impression. 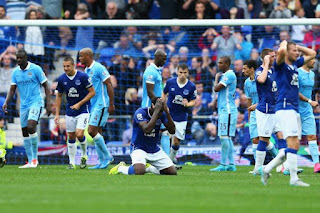 Yet for a long period of the game their team was certainly in with a shout. This was a strong Everton side, headed up by Romelu Lukaku up top and inspired by English starlet Ross Barkley in midfield. They looked dogged and determined. It could have been a different story had Lukaku’s early goal stood, or if his free kick on the stroke of half time had been an inch or two lower. If Gareth Barry’s looping header hadn’t been cleared off the line by Vincent Kompany. The game was wide open with both sides striving for that crucial breakthrough and that made for a wonderful spectacle. 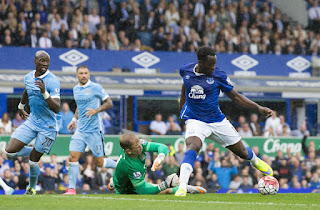 Once City broke the deadlock, there was only one outcome.

In truth, Manuel Pellegrini’s side toyed with the Toffees like a cat with a mouse. Patient, resilient and professional, the Blues never looked out of their comfort zone and remained solid with everything Everton had to offer. It was perhaps their strongest test to date: a paltry West Brom offered little threat and a below-par Chelsea seemed only too happy to roll over and have their belly tickled. 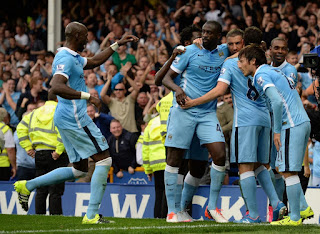 Everton really did give it a good go, make no mistake of that. But this was a City side with their mojo well and truly back. Pellegrini went with the same starting XI as last week – if it ain’t broke – and his consistency paid dividends. His team looked comfortable throughout: threatening in possession and capable when defending. This is a team riding the crest of a wave with confidence in spades- and it shows. 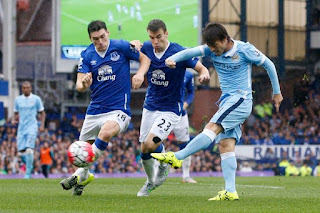 Everything has just clicked. The centre half pairing of captain Kompany and Eliaquim Mangala look dependable, with full backs Bacary Sagna and Aleksandar Kolarov adding to the solidarity, giving width when assisting in attack. Fernandinho and Yaya Toure, adept in interception in front of said back four, allowing the creative juices of Jesus Navas, David Silva and Raheem Sterling to flow with panache. Sergio Aguero is there to score the goals and we all know how capable he is of that. 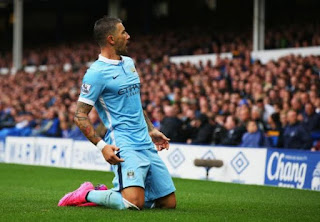 For all the superlatives and adjectives, the crux is this: a holistic equilibrium has been struck. The balance is right. This is a team capable of soaking up the pressure and hitting on the counter with pace in abundance and flair. Sterling and Silva sing a mesmeric duet in midfield, with the 20 year old providing the assist for Kolarov to slot past Tim Howard to give City an eventual lead in the second half of the game. The pressure had been steadily building after half time, the breakthrough deserved. 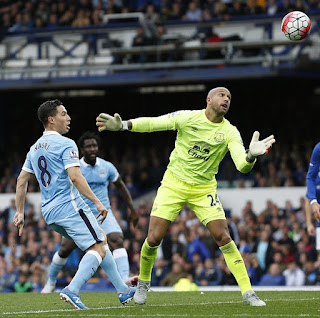 A wonderfully open and engaging game meant tired legs aplenty, particularly in Everton’s defence.  So when Yaya’s delightful pass late on fell meticulously at substitute Samir Nasri’s feet, the Frenchman was only too happy to lift the ball over Howard to make it 2-0 with the cheekiest of chips. That secured City’s ninth Premier League win in a row- with Watford at the Etihad next on Saturday. A 10th would be a record breaker and rumour has it that Kevin De Bruyne’s arrival is finally imminent. Quality has been added to their squad in key areas and it’s no coincidence that City’s formidable start to the season has coincided with Kompany’s return to supreme form. 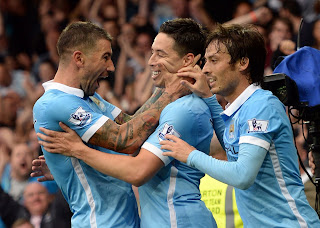 Sitting pretty at the top of the League having conceded no goals and scored eight in three, they are not only the team to beat but the team lighting up the Premier League with exciting and entertaining football. Sterling has made a vital difference and don’t let that be underestimated: not only his partnership with Silva, but with his speed and the space he creates for his teammates to expose. He’s a distraction for the opposition’s defence; something you certainly don’t need when Yaya, Silva and Aguero are ready to exploit those gaps. The players are working for each other and look to be enjoying themselves while they’re at it. The system works. The team spirit is infectious. 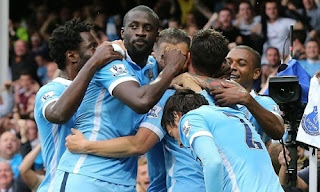 It’s still a mixed bag as far as their rivals are concerned. Chelsea look to be going someway to banishing their demons after signing Pedro and their win at West Brom, but United look flat and alarmingly short of creativity and firepower following their goal-less draw at home to Newcastle, although Wayne Rooney’s hat-trick midweek against Club Brugge has gone some way to restoring faith at Old Trafford. It’s a similar scenario for both Liverpool and Arsenal after their dour 0-0 draw failed to capture anybody’s imagination. Although there’s time for those teams to catch up and for City to slip up, the early pace setters show no sign of relenting anytime soon. 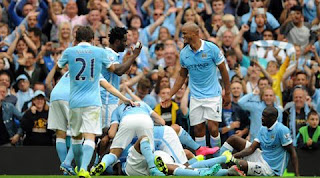 Jose Mourinho will have you believe that Chelsea’s 3-0 defeat at the hands of Manchester City was a ‘fake result’. He will also try to convince anybody who is subjected to listening to him that his side were the better team in the second half of the game.


Despite his best intentions, these two outlandish statements alone are proof that Jose isn’t always capable of manipulating the media. His bullish remarks not only lack integrity but also fall completely into the realm of nonsensical. For this was the day when the manager of the Champions substituted Mr John ‘Captain Leader Legend™’ Terry for the very first time. A day where he stood on the touchline perplexed with not much of a Plan A, let alone a Plan B. A day where City played his team completely off the park. 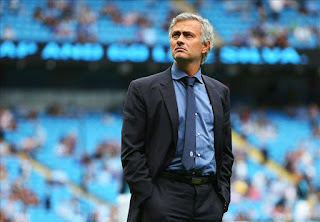 At one point, in fact several, Jose remained frozen to the spot, looking around him, dreaming up excuses.  It was a day where appealing for free kicks, waving invisible cards and hacking opposition players down with ill-timed tackles in a bid to aggravate led to nothing but a crushing defeat. Where Cesc Fabregas could have bothered to turn up, Branislav Ivanovic was completely out of his depth and Eden Hazard looked bloated from overindulging post-title win. Chelsea were lethargic, lazy and lacked ideas and direction. City were anything but. 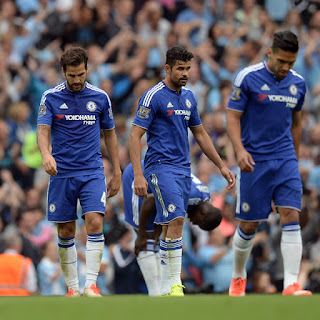 Jose may have been able to deflect any criticism after Chelsea’s title defence began with 2-2 home draw to Swansea onto club doctor Eva Carneiro, but here there was nowhere to hide. Despite his desperate attempts to make poor JT the scapegoat this time, a move that made no sense seeing as Gary Cahill is equally as slow and was left on the pitch, the Champions were left brutally exposed by a City side who were not only physically superior but were stronger in every position on the pitch. The 3-0 score line was far from a fake result. In fact it doesn’t tell the whole story. It should’ve been a lot more. 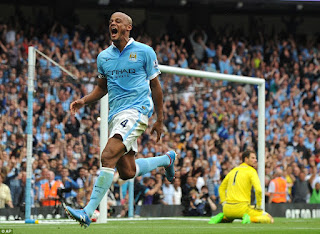 Manuel Pellegrini’s only change from the side that beat West Brom 3-0 was to bring Sergio Aguero in for Wilfried Bony upfront. As soon as Martin Atkinson blew his whistle to declare the day’s proceedings open, City were a force to be reckoned with. Aguero, Golden Boot winner last season and human assault rifle, almost scored within the first minute but Chelsea’s second choice goalkeeper Asmir Begovic stood firm. This became a running theme throughout the first half, with the Bosnian thwarting Pellegrini’s smiling assassin time and time again. Chelsea’s defence were ran ragged and were repeatedly bamboozled by the pace of Raheem Sterling, the trickery of David Silva, the power of Yaya Toure and the sheer wonderment of Aguero. Assertive and professional to a tee, City’s focus was unequivocal. They meant business.


TO READ THE FULL ARTICLE CLICK HERE
No comments: 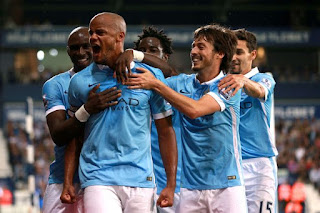 The look on Boaz Myhill’s face said it all. With just nine minutes on the clock at the Hawthorns, visitors Manchester City had taken the lead against home side West Bromwich Albion.
He’ll be the first to admit he should’ve done better as Yaya Toure’s shot trickled over the line, with a couple of touches along the way pointing to the Dubious Goals Panel, but Myhill’s face was a picture. Send help, we’ve got 81 minutes of this to come. Here we go, the floodgates have opened. Brace yourselves boys. He wasn’t far wrong.
Manuel Pellegrini had the luxury of watching his fellow title contenders step up to the plate before him during the opening weekend of the Premier League season. The Chilean saw Manchester United kick it all off in unconvincing style, with a 1-0 home win against Tottenham Hotspur, aided in part by a Kyle Walker own goal, the talking point in an otherwise underwhelming victory.
The City manager wouldn’t have been too concerned by events at Stamford Bridge either. A spirited Swansea side, assisted by Thibaut Courtois’ red card and subsequent penalty, held Champions Chelsea to a 2-2 draw. It was a lacklustre start from Jose Mourinho’s men, who has managed to deflect the disappointment of the first game of his title defence ending in a draw onto Eva Carneiro. #scapegoat
TO READ THE FULL ARTICLE CLICK HERE
No comments: 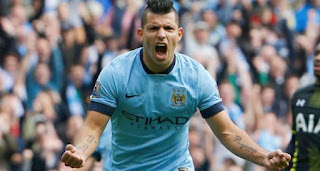 After completing the double in his first season in charge at Manchester City, the 2014/15 season ended trophy-less for Manuel Pellegrini, with Jose Mourinho’s Chelsea romping away with the Premier League title. Lacklustre performances and inconsistent form left fans questioning the tactical aptitude of the Chilean and the commitment and desire of the players.


A multitude of factors all played their part: an ageing squad, injuries, a below-par defence and conflicting tactics didn’t help their cause. An inability to a) deliver a decent corner into the box and b) score from one didn’t go unnoticed. Unexpected points dropped against inferior opposition meant no gold badges on the shirt this season. With rumours circling that Pep has already agreed to take over at the Etihad next season, surely Pellegrini will be looking to end his tenure on a high?


Most people know to expect the unexpected as far as City are concerned, but here are five things the sky blue contingency can look forward to this season. 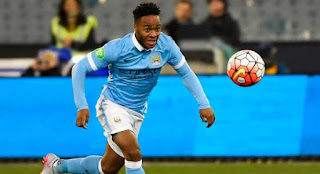 City already had a plethora of talent in the middle of the park, but all eyes will be on £49 million record signing Raheem Sterling. He has already impressed during pre season, forging a promising understanding with Spanish magician David Silva, scoring and assisting. Question marks hover over how much £8 million man Fabian Delph will feature after his indecisive move from Aston Villa, but he is a useful addition, adding to the English quota and providing more strength in depth.