Get ready for three weeks of total football...Copa Do Mundo 2014 is here!

Get your bunting up, your replica shirt at the ready and the beers on ice- the 2014 World Cup is almost upon us. For the next three weeks, the eyes of billions of people from across the globe will be focused on Brazil for what is the biggest tournament in football, with 32 countries set to compete for the honour of winning the infamous gold trophy. 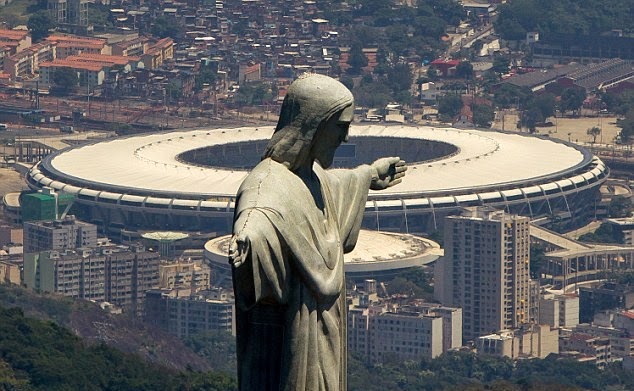 A galaxy of elite players from a variety of leagues has descended on Brazil to showcase their talent on the most prestigious stage of them all. From Real Madrid’s Ronaldo to Barcelona’s Neymar, the best of the best will be hoping to impress where it matters the most. The cream of the crop will perform in the depths of the rainforest, near the beaches of Copacabana and Ipanema and in the shadow of Christ the Redeemer in the country that didn’t invent football- but reinvented it. 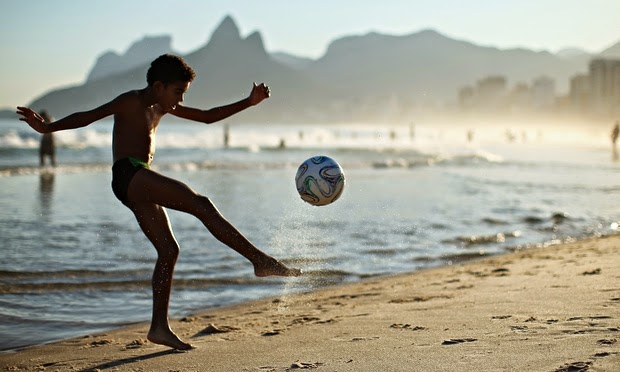 But who’s got what it takes to become the 2014 World Cup Winners at the Estadio Maracana in Rio De Janeiro on July 13? Here’s my take on the top five favourites to win it in the South American sunshine… 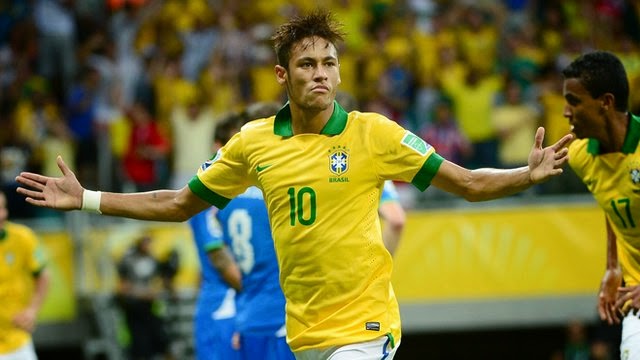 The tournament favourites with a distinct advantage- it’s on their turf. The Samba boys represent football for a country where it’s played barefoot in the street and on the beaches. The sport runs through their veins- and boy do the Brazilians know how to play it. Five times winners, the last time they won it was in 2002 in Japan, when they beat Germany 2-0 with both goals coming from Golden Boot winner Ronaldo.


Guided by Luiz Felipe Scolari, Brazil go into the competition with two warm-up wins to their name and are huge favourites to storm Group A, with games against Cameroon, Croatia and Mexico. But class oozes through the team in every position, from Davi Alves, Thiago Silva and Dante to Willian, Fernandinho and star man Neymar. When it clicks, it really clicks and makes for a wondrous spectacle- but will the pressure of being the home nation and favourites prove too much?


One to watch: It has to be Neymar. 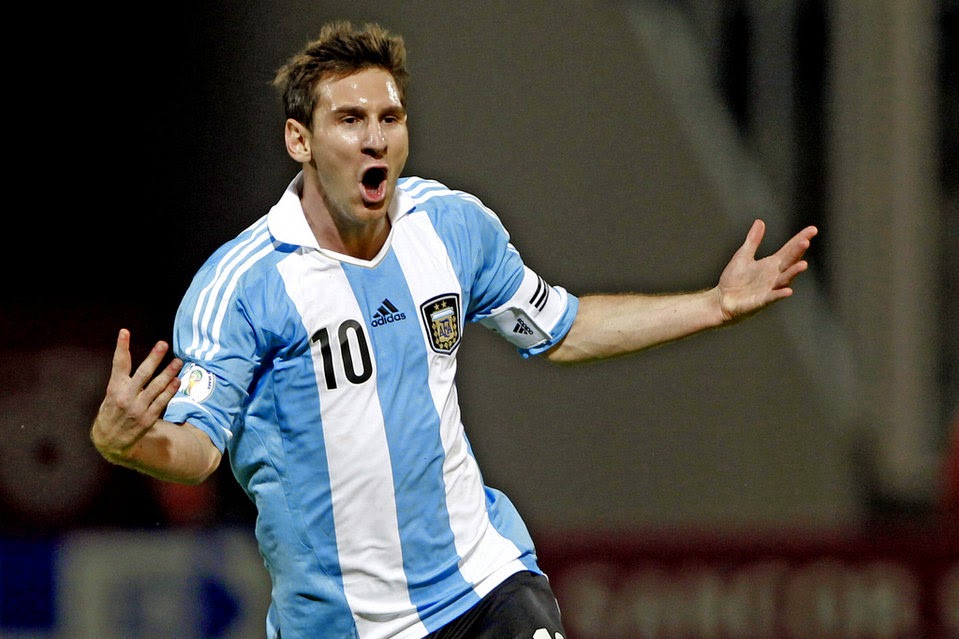 The Argentineans will be buoyed by the fact that they are familiar with the climate and they will be focused on getting one over the neighbours in their own back garden. The last time they won it was back in 1986 in Mexico for the second time, largely thanks to a star turn by a certain Diego Maradona, but with back to back wins in the warm up fixtures and a squad brimming with world class players, Alejandro Sabella will know his team is in with a real shot of lifting the gold trophy.


Group F has been relatively kind to Argentina, with games against Iran, Nigeria and Bosnia & Herzegovina. When you’ve got Angel Di Maria, Gonzalo Huguain, Sergio Aguero and Ezequiel Lavezzi amongst your arsenal, anything is possible. But it’s captain Lionel Messi that the team will be relying on to deliver the goods. Having never scored a World Cup finals goal, everybody is aware of what the striker is capable of conjuring up. If he turns it on, expect Argentina to shine. If it clicks, there’s no reason they can’t go all the way.


One to watch: Of course it’s Lionel Messi.

The Champions travel to Brazil to compete to become...Champions...


THE TOP FIVE CITY PLAYERS TO LOOK OUT FOR IN BRAZIL 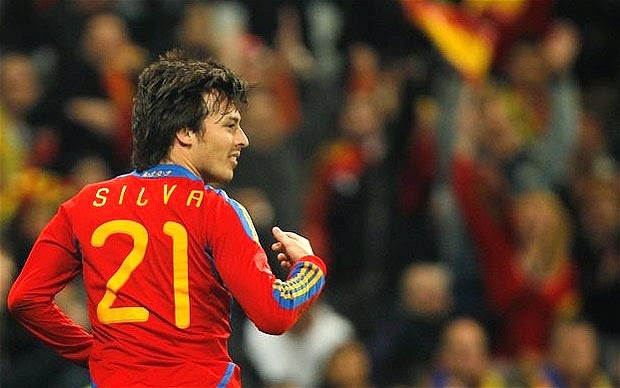 It’s credit to the strength and depth of talent that’s in City’s squad that they could almost field a full starting line up of internationals who have been called up for their respective countries for the 2014 World Cup in Brazil. A trio have been included in the Argentina squad: defender Pablo Zabaleta, defender Martin Demichelis and striker Sergio Aguero. A duo for England: goalkeeper Joe Hart and midfielder (not defender) James Milner. Bosnian striker Edin Dzeko and midfielder David Silva for Spain both also get the nod.  Defender Vincent Kompany, Ivorian Coast powerhouse Yaya Toure and Brazilian Fernandinho also feature in their countries squads.

It’s a commendable mass of talent who will all be competing in the World Cup off the back of a double trophy-winning season, but there are notable omissions. Samir Nasri’s absence for France caused uproar, particularly after the impressive season the midfielder’s had. Instead he’s enjoying a summer in Los Angeles with his girlfriend (he doesn’t look too upset!). Both Jesus Navas and Alvaro Negredo were named in the preliminary squad for Spain, but failed to make it onto the plane.

But out of the 10 Blues heading to South America, who are the top five to look out for during the tournament? With the bar set so high, it was difficult to narrow it down to just five, but these are the players I think will have the biggest say for their countries on the biggest stage of them all. I originally included England goalkeeper Joe Hart, but opted to go for players who’d feature for countries we’d most likely see progress the furthest in the competition. Ouch… 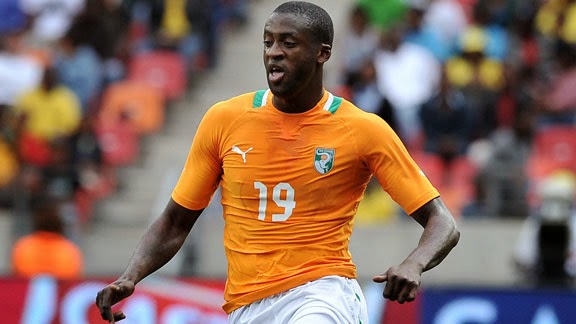 The Ivory Coast international couldn’t be going into the World Cup in finer form. 31 year old Toure is on the top of his game, having ended the season third best goal-scorer in the Premier League with 20 goals, a mighty haul from midfield. Capable of producing those something out of nothing match-winning moments, Yaya’s unique blend of strength, power and ability often results in incredulous goals and commendable assists. An international veteran of sorts, having played for the Elephants for 10 years and played in five Africa Cup of Nations tournaments, this will be the third World Cup for the midfielder. Expect the unexpected when it comes to Yaya- but I expect him to be the heartbeat of the Ivory Coast side. 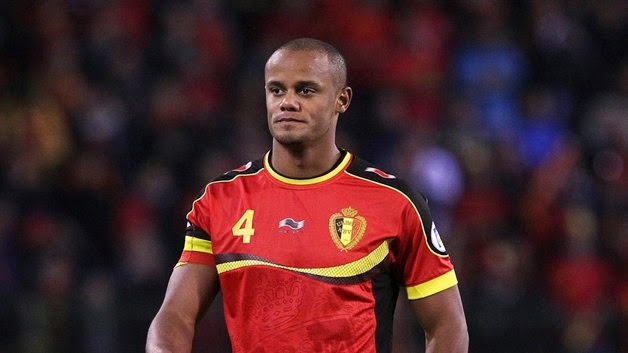 Captain for both club and country, Vincent Kompany is a solid and much-respected defender. The 28 year old led City in a double-winning 2013/14 season and will be taking his consistent form to Brazil, having been named in the PFA Team of the Year for the second time. Belgium are regarded as many as being the dark horses of the tournament: the Red Devils are fifth favourites to win the competition behind Brazil, Argentina, Germany and Spain. Such an occasion calls for a cool head, so Kompany will need to make sure his temperament is in check and his tackling is spot on. He has been an ever-present in the warm-up games, comprehensive wins against Sweden, Luxembourg and Tunisia. This will be his first major international tournament – a major chance to showcase his capabilities amongst the elite.

One Night In Turin, The Tears of a Clown... 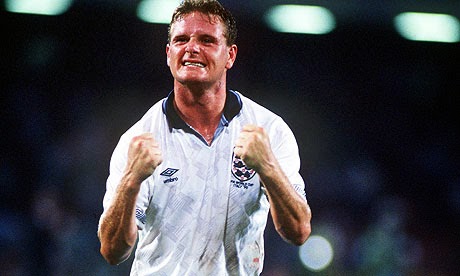 When you say the name Paul Gascoigne, what’s the first thing that comes to your mind? Those tears in Italia ’90? His amazing volley against Scotland in Euro ’96 and subsequent dentist’s chair celebration? When he ruptured his knee ligaments during the FA Cup Final against Nottingham Forest in 1991? His ability and some of his thunderbolt goals?


Or is it when he turned up to comfort murderer Raoul Moat with a fishing rod and a bucket of chicken? His boozing with best friend Jimmy ‘five bellies’? When he ‘booked’ the referee during his Rangers days? When Vinnie Jones grabbed his testicles? Or the much-publicised alcoholism and family problems that have blighted Gazza throughout his life? 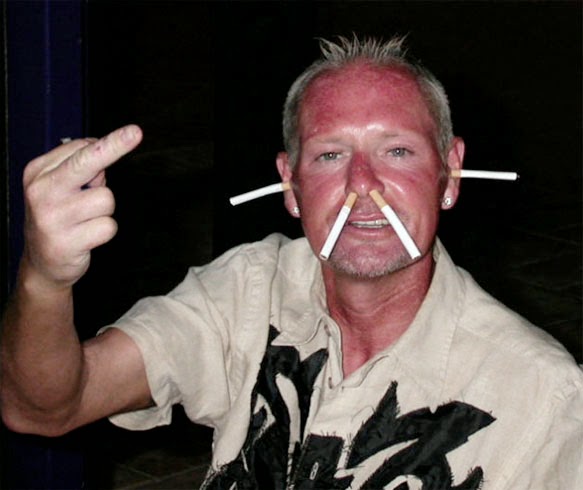 Gascoigne's career has always been touched with genius yet plagued with controversy and injuries. He came from a working-class background in Gateshead and had a love of football from the age of four. At the age of 13 he joined Newcastle as an apprentice and three years later, in 1983, had signed for them. He captained the youth team in 1984/85, who went on to win the F.A. Youth Cup. 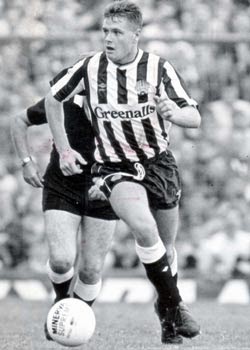 His debut for Newcastle came as a substitute against Queens Park Rangers in April 1985 and it was on Tyneside where Gascoigne began to really establish himself. He was a tenacious, gutsy midfielder who was strong with sublime attacking flair. In the 1987/88 season he was crowned Barclays Young Player of the Year and had attracted the attention of several clubs, notably Manchester United and Tottenham Hotspur. Although he was a Geordie through and through, Gascoigne thought the time was right for a transfer to further his career. He had scored 25 goals for Newcastle in 107 appearances, and was sold to Tottenham in the summer of 1988 for a British transfer record of £2.3 million. 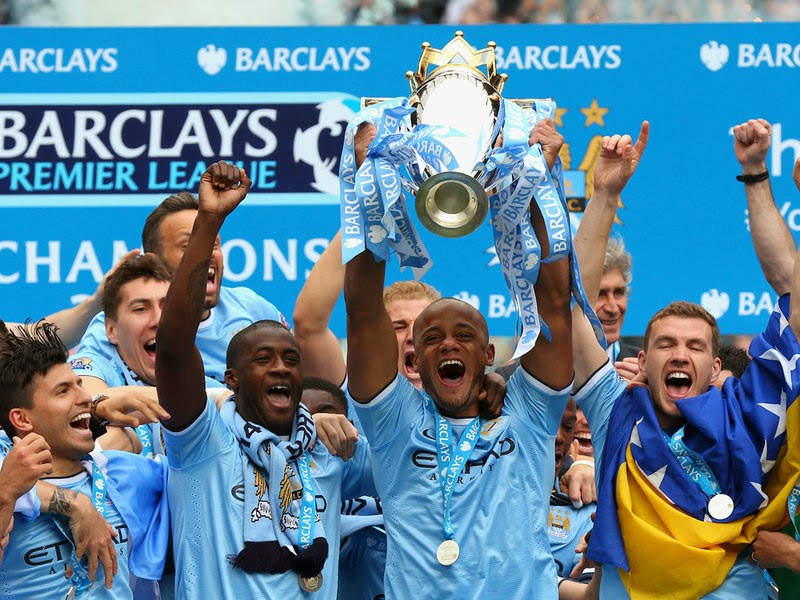 Although the final day didn’t quite encompass the unequivocal drama experienced two seasons ago, when Martin Atkinson blew his whistle to signal full time, the outpouring of emotion at the Etihad Stadium was parallel to that witnessed on that special day. Thousands took to the pitch in euphoric glee. Grown men swept their children up and raced towards the turf, couples held hands, helping each other over the electronic advertising boards and groups of friends held aloft triumphant signs. Complete strangers embraced on the turf, delighting in unbridled joy. It had happened again. 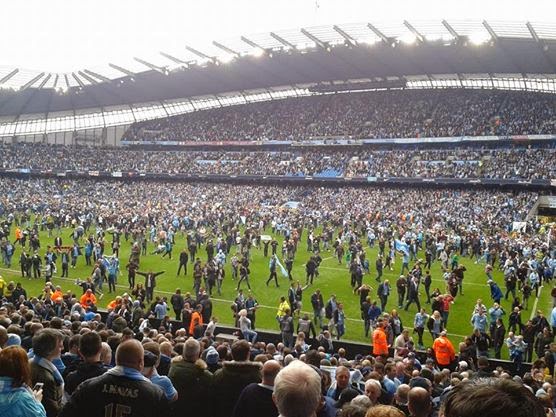 Their team, my team, Manchester City, had just been crowned Premier League Champions for the second time in three years. It’s a feat the fans of this club can never get used to. Based on the evidence witnessed so far, there’s certainly a justification for such occasions to become the norm.

The club started the season with a new manager- 60 year old Chilean, Manuel Pellegrini. Having had success in Argentina, spells in La Liga at Villarreal, Real Madrid and Malaga had ended trophy-less. The previous season ended in disappointment for the Blues: beaten by Wigan 1-0 in the FA Cup final, manager Roberto Mancini left by ‘mutual’ agreement amongst a cloud of negativity surrounding dressing room unrest rumours. It was hoped Pellegrini would bring a more ‘holistic’ style to the dressing room. Nobody quite knew at the time what defined holistic: but if holistic is in fact defined by winning two trophies in your debut season in a new league, he most certainly delivered. 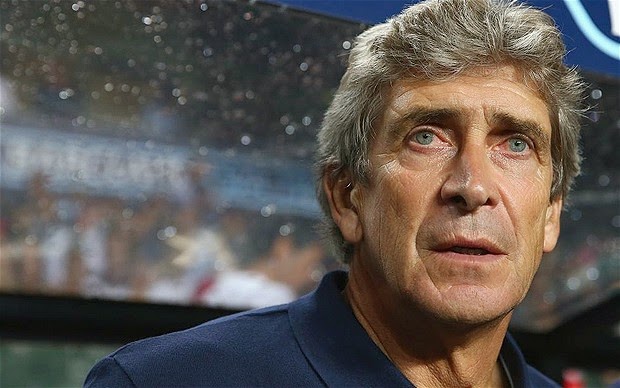 There had been no denying the quality that City had possessed through the season. After a shaky start, with away defeats at Cardiff and Villa, and a calamity mix-up at Stamford Bridge between Joe Hart and Matija Nastasic that gifted Chelsea three points, City really turned on the charm. Big scoring wins against Spurs, Norwich and United impressed and a 6-3 victory over fellow title challengers Arsenal left pundits and critics alike purring. Teams began to look intimidated, often fearful, when it came to playing against City. The football on display: inventive, inquisitive, imploring and incisive, was a delight to behold.