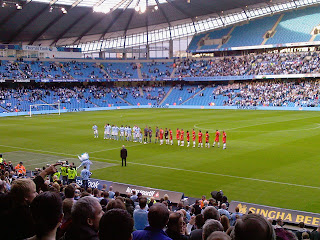 Football FanCast columnist Emily Brobyn tries to dissect on what is going on at her beloved Manchester City and feels that City fans deserve so much better.
Firstly, may I start this article by saying I have just returned from watching Manchester City lose at home 1-0 to FC Midtjylland in the second round of qualifying for the UEFA Cup and I am feeling a mixture of emotions: fury, anger, upset, confusion, disappointment and bewilderment. It is an ideal time to write a piece on what is going on at Eastlands- or at least try to guess at the difference between the truth and the rumours.Everybody knows the story of Dr Thaksin Shinawatra's takeover at City. The Thai 'billionaire' arrived at Eastlands making all the right noises to the media throng and shocked everybody in the football world when he appointed former England manager Sven Goran Eriksson as manager. £80 million pounds was spent on bringing players into the club to mount City's European challenge and to catapult City from mediocrity.

After an amazing start that found City sitting pretty at the pinnacle of the Premier League, and mesmeric performances from the likes of Martin Petrov and Blumer Elano, the wheels slowly began to fall off Sven's bandwagon. By April, rumours began to circulate regarding a fall-out between Sven and Shinawatra, that the chairman was far from happy with City's slump in form and wanted Sven out. Sure enough, despite big protestations from City fans and outcries from pundits and the media alike, Sven left the club and became the manager of Mexico's national team.

Shinawatra was quick to bring in Sven's replacement- in the form of Mark Hughes, a man who had done well at Blackburn Rovers with a modest transfer kitty. Simultaneously, Garry Cook was introduced as City's new executive chairman. Since their arrivals, Brazilian Jo has been signed from CSKA Moscow for £18 million and Israeli Tal Ben Haim from Chelsea for £5 million.

Right, now we are up to speed, it's time to dissect. A lot of what I will write I admit will be speculation as nobody seems to have concrete answers to the current situation at the club. Our chairman is now a fugitive after he absconded from his court case in Thailand. The case in the far-east will continue in his absence, and if he is convicted he is set to lose his £800 million fortune. A guilty verdict should also inevitably result in him falling foul of the Premier League 'fit and proper' person test, potentially meaning he will be prevented from running City. Are the rumours true that he is looking to sell the club, or that he is looking for a financial injection from the Middle East? In fact, why did former chairman John Wardle sell to Shinawatra in the first place if he was aware of the hoopla surrounded him? Was Wardle lending money to Shinawatra to fund the wages? Are City's mega money transfer deals all on finance and being paid for purely by television money as widely speculated?

Another furore that has been engulfing the club is the supposed transfer deals of Stephen Ireland and Verdan Corluka. Let's look at the Ireland saga first. The events that are alleged to have happened on the day of the AC Milan are farcical and beyond belief. It is reported that, because Shinawatra's advisors informed Ireland that he was being transferred to Sunderland, he wasn't required to turn up to play for the AC Milan game. As time creeped on before kick-off, Hughes began to wonder where Ireland was as he was expecting him to turn up to play. When he made a phone call to Ireland, he was at the Trafford Centre with his missus and Hughes demanded that he went straight to Eastlands. An example of how, allegedly, the board are interfering with Hughes' player management.

The Corluka affair is another baffling one. The in-form Croatian, fresh from the Euros, was the subject of an offer from Tottenham Hotspur. He then travelled down to White Hart Lane to complete a medical and discuss terms and the deal was expected to be completed within 24 hours. The next day, City issued a statement saying that Hughes had been involved in a heart-to-heart with Corluka and had convinced him to stay in Manchester. The same time, Corluka's agent released a statement completely contradicting City's, saying that the Croatian was 'very unhappy' and was expected to complete the move to Spurs as agreed. What is going on? I wouldn't want to lose Corluka as he is a superb player, but if he was insistent on leaving, nobody is irreplaceable.

But it really is typical City that we can beat AC Milan one day (who did play the likes of Paulo Maldini, Clarence Seedorf and Gattuso) and then lose to FC Midtjylland the next. The UEFA Cup shouldn't be taken lightly though. It is fantastic being involved with European action, but City did only warrant the place as a result of the Fair Play league. The Blues didn't actually earn the right to play in Europe outright through league positioning- and it showed. Perhaps the realisation that maybe we are just not good enough to be in Europe technically is the hardest truth of all but one that may have to be accepted. Don't get me wrong- I would love a run of European football, but our performance against Midtjylland was nothing short of embarrassing. The opposition had finished second in their league in Denmark, City had finished ninth. I am sure that the 18,000 people who actually turned up to the game expected City to steamroller their opponents and to take a comfortable lead with them to the SAS Arena. They should know that life is never that easy at Manchester City.

So at the moment, nobody quite knows what the future does hold for the most entertaining team in England. As the 2008/09 season kicks off and City head to Villa Park to start the campaign, there is most definitely an air of uncertainly lingering over Eastlands, with many fans asking the simple question 'what is going on?' So I ask you Mr Cook or Mr Shinawatra, what is going on? You may treat Manchester City F.C. as a business and nothing more, but for the fans it is their beloved football club. Their pride and joy. They deserve a lot more than you are giving them at the moment. As the old saying goes, 'don't bite the hand that feeds you'. This Is Our City. Let's keep it that way.