From Hero to Villan: The rise and rise of Martin O’Neill 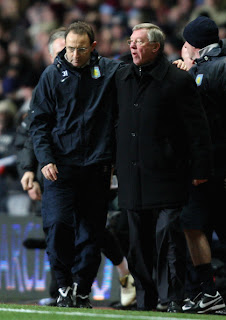 One of the most successful football managers ever, Alex Ferguson, will soon be relinquishing his post and retiring from the game. Speculation has been rife for years regarding a potential suitor to the Old Trafford throne. Many rubbish the Jose Mourinho links and suggest that the most appropriate successor would be Martin O’Neill. Why? What is it about the current Aston Villa manager that makes him significantly popular?
He comes across as the type of man you could go to the local pub with for a pint and put the football world to rights with. His passion and desire are hugely endearing, making him a big hit with fans in general. As a person he seems relatively unassuming with a hint of eccentricity. These mixed character traits combine to make quite an unusual personality: an explosion of touch-line animation mixed with calm judgement and intensity. It’s a potent combination that has proved to bring success both during his playing career and throughout his managerial career so far.
O’Neill was born and raised in Northern Ireland into a family with Gaelic football roots. He was naturally indoctrinated into this way of life and it was during playing for Irish League side Distillery where his talent was spotted by a scout from Nottingham Forest.
He moved to Forest in 1971 and won an array of trophies at the City Ground, namely the League in 1978 and League Cup in both 1978 and 1979 and the European Cup in 1980. During this time O’Neill was also playing for Northern Ireland and was captain for his country at the 1982 World Cup in Spain. He also had flirtations with Norwich City, Manchester City and Notts County before retiring and moving into the role we all recognise him for now- football management.
The Irishman’s first managerial role was at Wycombe Wanderers back in 1990. He was an instant success: he narrowly missed out on promotion in his first season, but then celebrated back-to back promotions, taking the Wanderers from the Conference to the then-Division Two. He then moved to Norwich City but left the club months later after a dispute with their chairman over signings. But O’Neill wasted no time and became the manager of Leicester City. Once again, winning ways came to Filbert Street, winning the League Cup twice in 1997 and 2000 and subsequently qualifying for the UEFA Cup. The fans adored him, fellow managers and critics applauded him, it seemed like O’Neill really had the Midas touch.
Despite pleas from the Foxes fans not to leave, O’Neill was progressing in his career and moved up to Scotland to become the Celtic manager in 2000. It was in this role where he made his name: he amassed an incredible haul of accolades at Celtic Park, completing the domestic treble in his first season and took the Bhoys into the Champions League three times. During his time he won three League titles, three Scottish Cups and a League Cup. But in 2005 he sensationally resigned to care for his ill wife Geraldine. It was a move that stunned the football world- at the time O’Neill was being linked with a plethora of jobs in England.
But just over a year later, in August 2006, O’Neill was back in football as manager of Aston Villa. He has remained the Villans’ manager ever since and recently took his team to the League Cup final, where they were beaten controversially by Manchester United 2-1. His Villa side combines flair and grit, youth with experience and is currently embroiled in the race to break into the Premier League top four. He admittedly makes mistakes: last season O’Neill fielded a weakened side in a UEFA Cup game in an effort to challenge for the top four instead. But his side were knocked out of Europe and faded away, finishing 6th instead.
But it’s a learning curve and O’Neill’s record in football speaks volumes. His intellectual management style, impressive tactics and heart on his sleeve personality combine to make him one of football’s most valued managers. Aston Villa would do well to live by their motto and be prepared- an away day at Old Trafford may become a permanent home fixture for O’Neill someday soon.