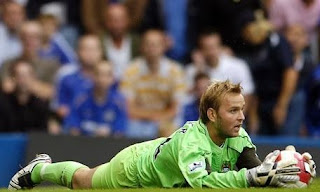 In the final part of a three-part exclusive interview, Weaver tells us about his favourite managers, players, why he left City, what he thinks about the club now and which goalkeepers he would be reserving seats for on the plane to South Africa. Not to mention his thoughts on a potential Andy Morrison-Mike Tyson clash...

Former Manchester City goal-keeper Nicky Weaver is only 30 years old, but could have quite easily already retired from the game having suffered a long-sustained knee injury. Revolutionary surgery gave him a new lease of life but in 2006 his career eventually led him away from the club he had enjoyed early success at.

“I’d actually agreed a new contract to stay with the club, but the day I was meant to sign it Stuart Pearce got sacked. The club said to leave it with them for a couple of weeks, that they couldn’t do anything because Thaksin Shinawatra was trying to take over the club so contracts had been frozen until the takeover was completed. So I thought it was fine, left it with them but this continued all summer. Somebody at City told me that takeover take a long time to be sorted and I was reassured that it would happen.

“But the summer was passing by, the new season was getting closer and I still hadn’t signed anything. But I was desperate to sign, begging to come in and sign, but the opportunity just never arose. The club was constantly reassuring me but they had no manager or no owner. After a bit I had to start thinking about looking after number one and thinking of my own future, so I spoke to a couple of clubs. Then Charlton came in, they had just been relegated from the Premier League but pushing to go straight back up. So I signed for them. In hindsight I perhaps should have held out for City, but I had to do what I felt was right at the time. I couldn’t take the risk. I had 10 great years there and I had some great memories at City.”

“I’ve got a baby due this summer”

Weaver had enjoyed a loan spell at boyhood favourites Sheffield Wednesday during his time at City and played at Charlton Athletic. He then moved to Dundee United before joining Burnley in January 2010 for a chance of Premier League action. After celebrating success so early in his career, are there any more ambitions left for Weaver to fulfil?

“Well I’ve signed for Burnley until the end of the season. It’s funny because people don’t believe that I’m still only 30, probably because I broke in at such a young age. I’ve signed a short-term deal at Burnley. Hopefully I’ll play before the end of the season but the guy who’s playing now, Brian Jensen, is playing well so whether I get my chance or not I’m not really sure. I’ll have to wait and see. I just want to play for as long as I can, at the highest level that I can. At one point I nearly retired at the age of 25, so to still be playing at 35 would be fantastic for me. I just take each season as it comes. It’s something I’m really enjoying. 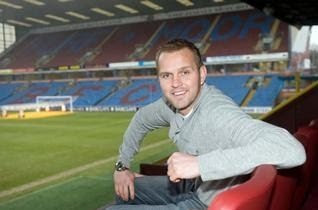 “I’ve got a baby due this summer; I’ve moved around all over the place so I really need to get some stability established now I’ve got a family on the way. I’m just looking forward to the rest of my career and I still think I’ve got a lot to offer. I’m only 30 with a wealth of experience. I’ve overcome my injury problems and hope I can pick up some more successful career highlights to talk about.”

Needless to say, Weaver’s former club City have progressed massively since his departure and the arrival of Sheikh Mansour to the City of Manchester Stadium. Superstar signings and Champions League targets have become the order of the day with a revolution and dreams set to be realised in East Manchester. For many City fans the realisation of the change in the club is still being digested, for a former player that played a big part in the club’s history, it’s incredible.

“I look at it now, having only been gone a few years, and the club’s moved forward so much. Shinawatra bought it and now these guys (Sheikh Mansour) have come in and pumped astronomical amounts of money into it. There are not many players now that played when I was there, only Micah Richards, Nedum Onuoha and Stephen Ireland that are still there. But to be part of it all was great and nobody can ever take that away from me. I suppose I’ll always be remembered for my City days. To come from a little club like Mansfield to be part of City’s history is something I’m incredibly proud of.

“I’ve never been back to City. I got invited to for the last game of last season as it was 10 years since the Wembley game but unfortunately I was on holiday so I couldn’t go. That would have been nice. But I look forward to going again soon now I’m back in the area. I might pay a visit before the end of the season. I’ve got a lot of time for everybody connected to the club. I don’t think the new owners are messing about as they’ve obviously got the funds. They want success and they want it now and will do whatever it takes to get it. Roberto Mancini will probably bring his own players in during the summer. If City finish in the top four he’ll be there but you just don’t know. It’s a tough one. But if he does get the chance, he can just add a couple of the players that he wants.

“I think with people like myself and Paul Dickov, who I still speak to, a lot of people can link to that period back in the late nineties where we played at the likes of Macclesfield, Stockport, Rotherham and Northampton Town. I always watch City’s results and it’s really exciting times there. They’ve definitely come a long way. I wish I’d never left City.”

They think it’s all over...quick-fire bonus round with Weaver...

With the World Cup on the horizon, which goalkeepers would you take on the plane to South Africa?

It’s a really tough one. Joe Hart should definitely be going. Rob Green will definitely go too. David James should go as long as he plays enough games for Portsmouth before the end of the season. But Paul Robinson’s had a good season too. It could change though. Chris Kirkland’s playing well too. But I really hope Joe goes because I still keep in touch with him, he’s a good lad. I know Jamo as well and if he does well he’ll probably go as number one.

Who is the best player who have played against and why?

I’m glad I played against Ronaldo while he was still in this country as he was the best player in the world at the time. But overall I’d probably have to say Ryan Giggs, just because of his longevity. His career has been unbelievable. Looking back, playing at Old Trafford against Wayne Rooney, Ronaldo and Paul Scholes was crazy. Going to the likes of Arsenal and Chelsea and playing against these superstars, it’s surreal. I remember the first game of the 2006/07 season was Chelsea at Stamford Bridge and I didn’t know I was playing until the day before. Suddenly there I am, live on television, playing against the likes of Frank Lampard and Didier Drogba. It’s great and it’s something I look back on. I never feel intimidated; you just go and do your job. I don’t like it if I don’t get nervous though, I like to have butterflies and fire in my belly.

Who do you regard to be the best manager you have played under and why?

Joe Royle was great for me. He brought me into the team, gave me my debut and gave me a lot of confidence. I played some of the best football of my career under Joe and I really enjoyed working with him. I also loved working with Craig Levine at Dundee United, who’s now the Scotland manager, he was terrific to work with. I’d like to work with him again. There are no managers I’ve ever fallen out with. I enjoyed working with Alan Pardew at Charlton Athletic. Under Kevin Keegan at City I was injured a lot. Stuart Pearce gave me another shot at City and I’ll always be grateful for that. But I’ve got the main memories of my career under the guidance of Joe.

Who would win in a fight between Andy Morrison and Mike Tyson? I've seen Mike Tyson recently on the television and he’s not looking in great shape...(laughs). He was a scary man Andy. I exchanged a few words with him in the first half at Maine Road once and he waited for me in the tunnel. He just grabbed me and gave me a good talking to- needless to say I never got on the wrong side of him again after that! He was scary, but he did brilliantly for us. He’s another player that the fans love, but he didn’t really play that many games for City. But he was a good captain, good leader and at the time, exactly what we needed at the club. I’m not sure if he’d beat Tyson but it would definitely be a close battle.

Top article Emily. Hope weaver gets a game before the end of the season