Some of the participants went gung-ho and even busted the accompanying dance moves. A few even climbed up onto their friend's unsteady shoulders to further embrace the chant. Luckily for us, some crafty folk decided to record the footage on their camera phones, so we get to witness the unlikely escapade. Thanks for that! And thanks to the student City fan who started it off in the first place, bravo. 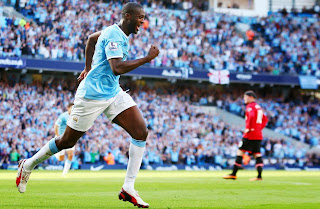 The song has been performed randomly in Ireland, Madrid and Magaluf too. City midfield supremo Yaya Toure was alerted to the incident on his Twitter account and was quick to comment:

@Toure_yaya42 How do they managed to do this Kolo/Yaya dance?? #loveit# :D

It seemed that Yaya attempted to give the dance a go himself, as his tweet revealed:

@Toure_yaya42 Well i give up..dancing is definitely not my cup of tea, it's way easier to kick a ball lols!!

He also thanked the people of Newcastle for it, albeit in French (they'll be used to that language though).

Where next, who knows. Watch this space.