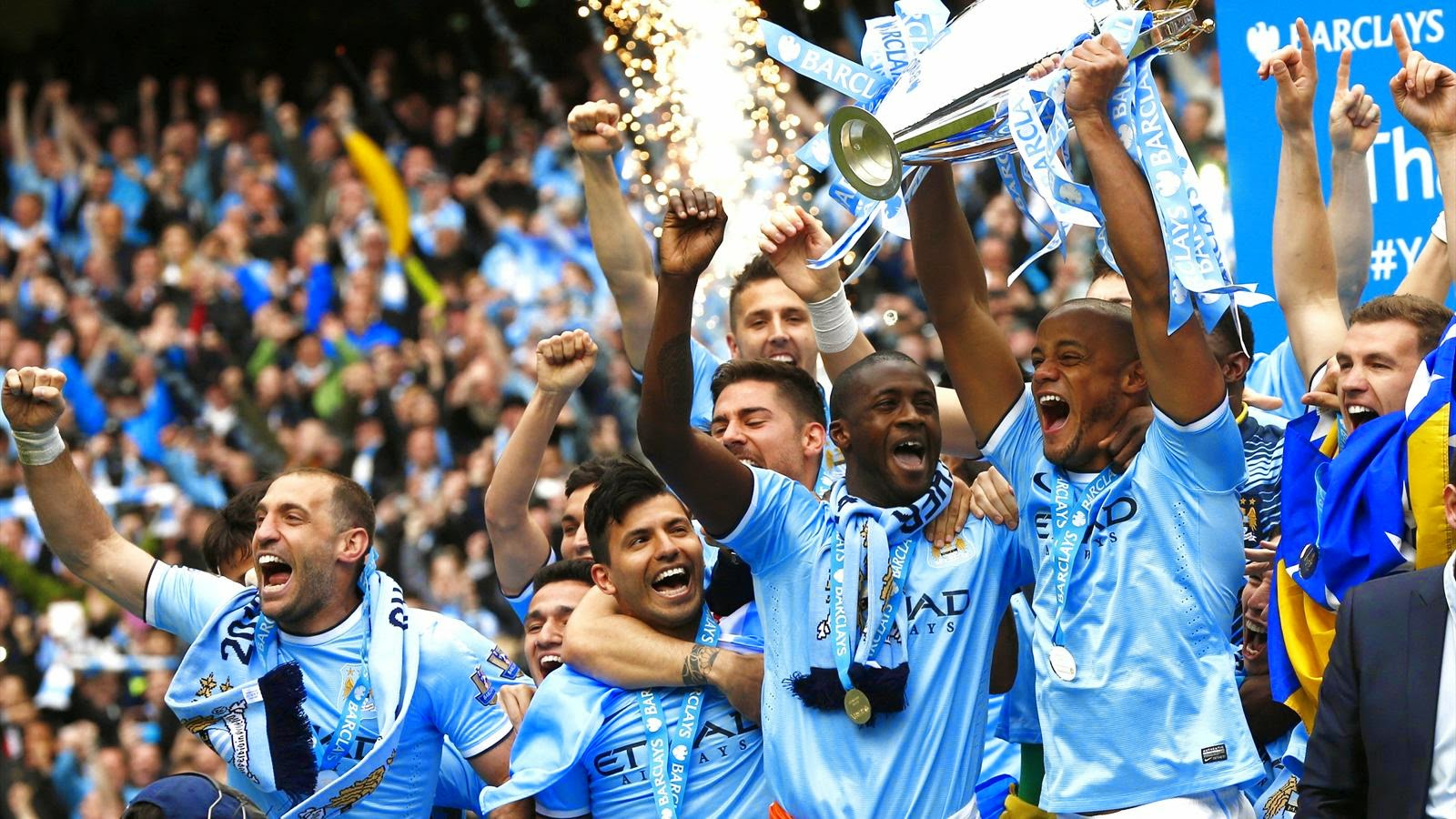 It doesn’t seem like two minutes have passed since Vincent Kompany held the blue ribbon-clad Premier League trophy aloft in front of a rapturous crowd at the Etihad Stadium. City had won their second league title in three years, a first under Chilean manager Manuel Pellegrini.  A successful season all round; the League triumph their second trophy this year after they had already secured the Capital One Cup.

But now the 2014 World Cup has been and gone and the 2014/15 season is back with a bang, City will be looking to clinch a hat trick of Premier League titles. The Blues have strengthened during the summer, with signings Willy Cabellero, Bacary Sagna, Bruno Zuculini, Fernando, Eliaquim Mangala all joining the Champions- and Frank Lampard on a six month loan from sister club New York City FC. 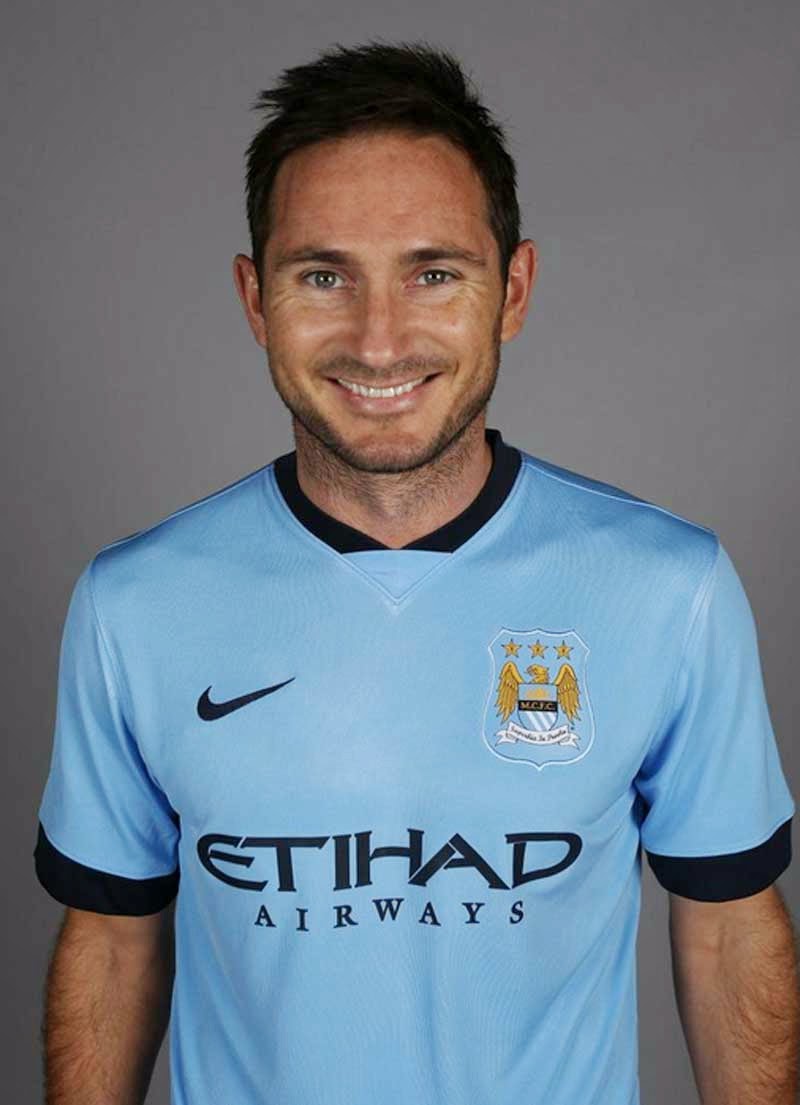 It’s always a mean feat trying to predict what to expect from City with the dawn of a new season upon us, particularly with the club being so unpredictable at the best (and worst!) of times.

A new signing…in the form of Stefan Jovetic 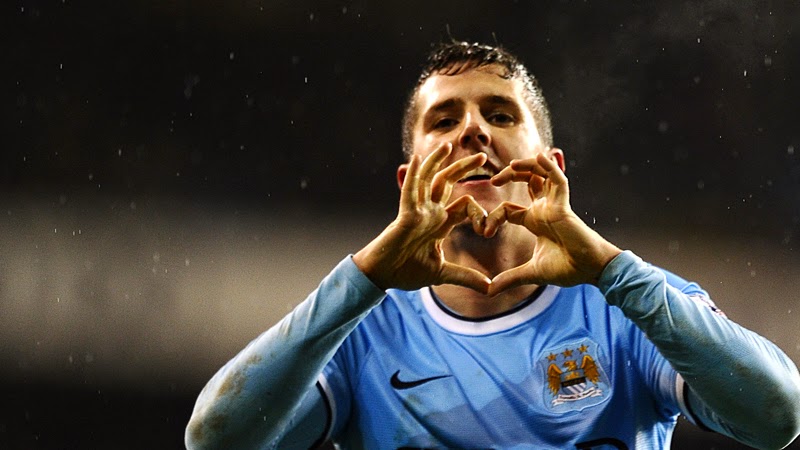 Despite the fact that the Montenegrin signed for the Blues from Fiorentina for £22 million before the start of the 2013/14 season, his debut campaign in England was plagued with injury. The 24 year old was hotly tipped for success in the Premier League, but was limited with game time and ended up scoring six goals in an ultimately frustrating campaign for the striker.

But fully rested throughout the summer and injury-free (touch wood!), Jovetic has enjoyed an electric pre-season, scoring five goals in six appearances. He looks sharp, focused and absolutely full of the promise of delivering what was expected of him last summer. It will be intriguing to see how Pellegrini rotates his strike force: with Alvaro Negredo out for three months with a broken metatarsal, the Chilean will choose between Sergio Aguero, Edin Dzeko and the in-form Jovetic to bag the goals for City. With the Montenegrin looking so irresistible, Pellegrini will no doubt be looking to see if he can continue his rich vein of form into the new Premier League season – and beyond.

A tussle between the sticks 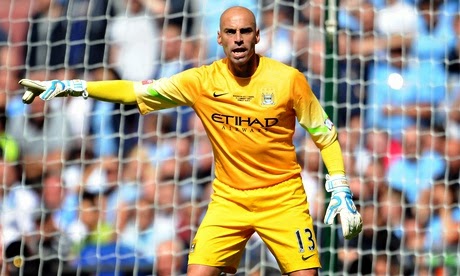 Much has been said about the whole Joe Hart saga from last season. England’s number one goalkeeper was ‘rested’ for a few games, with Costel Pantilimon stepping into the fray until Pellegrini felt it right to introduce Hart back into the starting line-up. Pantilimon has since been released by the club and has gone to Sunderland, but the signing of Argentine goalkeeper Cabellero means genuine competition for the goalkeeping spot at City.

Manager Pellegrini has previously worked with Cabellero at Malaga, the club he was signed from for £6 million. The 32 year old has already stated his intentions, insisting that he is delighted to be linking up with his former manager again, but has also joined the Blues not to settle for a place on the bench, but to challenge Hart and provide genuine competition to be the top stopper.

Cabellero should be at home straight away in Manchester, with his existing relationship with Pellegrini and being surrounded by fellow countrymen Aguero, Martin Demichelis, Pablo Zabaleta and Bruno Zuculini easing his transition from Spain. Having featured in pre-season, it will be interesting to see if he’s a man of his word and can mount a serious bid to overthrow Hart as City’s man between the sticks. 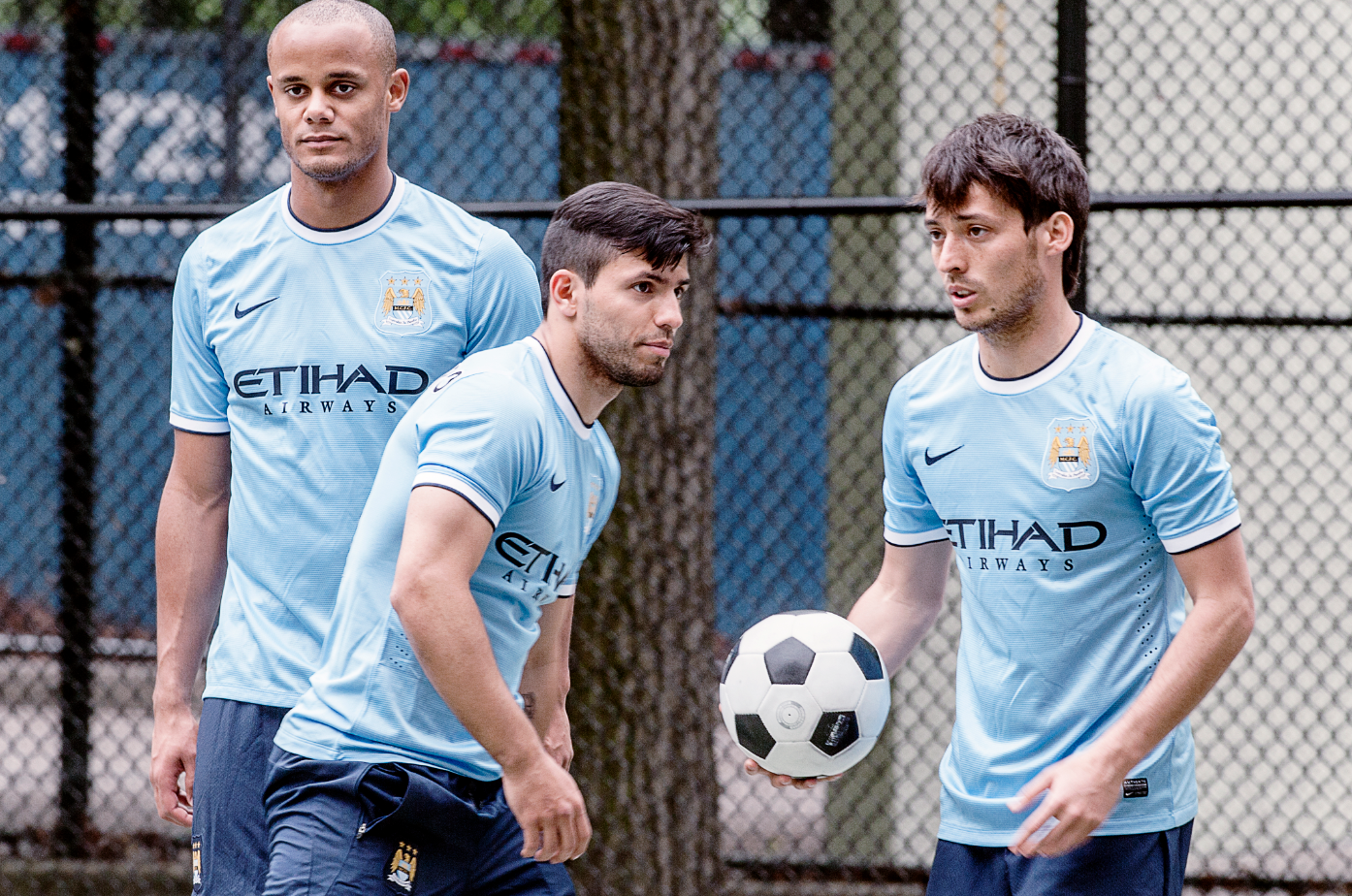 Since City broke their trophy duct back in 2011 by winning the FA Cup, the club have stuck with a familiar line-up. Captain Vincent Kompany has been vital in defence and Yaya Toure crucial in midfield. Then the diminutive Argentine Aguero joined in July 2011 and has been essential to the success of the team, providing us with that incredible moment on May 13 2012, snatching the Premier League trophy away from the clutches of rivals United in the final seconds of the season.

It’s having that consistency (barring injuries) in the line-up that has been pivotal to the on-going success at City. The familiar spine of Kompany-Toure-Aguero, along with other fundamental players like Zabaleta, David Silva, Dzeko and Hart, know how it feels to take the Blues from a side competing for honours to being champions. Keeping that group of players at the club and adding individuals in key positions has been a critical element to the ongoing success and it's a testament to just how valuable this players are that Silva, Aguero and Kompany have all received big money, five year contracts over the summer.

Whereas last season City’s biggest title rivals Liverpool hadn’t experienced the pressure of a title run-in, the Blues had been there and done it all before – and won. They knew all about coming back from behind, keeping cool heads, remaining focused and fighting until the end. That was the difference. It could prove to be the difference yet again this season. 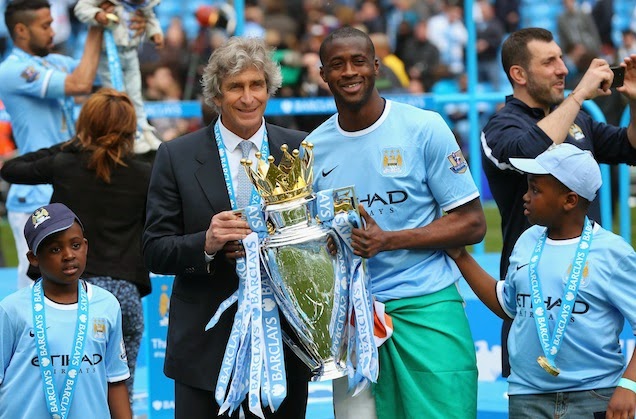 Without doubt, the biggest talking point City-wise during the summer break was Yaya Toure. The Ivorian caused a huge stir by posting a series of cryptic tweets post-season hinting to being unhappy due to the club allegedly forgetting his birthday. City strongly refuted the accusations, posting a video of Toure being presented with a birthday cake and further photographs supporting this.

Toure, aided largely by agent Dimitry Seluk, then proceeded to say he would make a decision about his future at City after the World Cup and promptly closed his Twitter account. After further ramblings regarding racism and tribulations being an African footballer, the midfielder finally put to rest all the speculation in July by announcing that he would honour his contract and stay at the club until 2017.

The whole palaver has been nothing but baffling after Toure enjoyed his most successful season to date at City, scoring 20 goals from midfield. A colossal presence in the side, he has been critical to the club’s success to date. Many fans will be thankful the Ivorian has put an end to the bizarre saga he caused during the summer; no player is irreplaceable, but Toure leaving would have provided Pellegrini with a big headache and a huge void to fill. Instead, the club can now concentrate on their title defence with him at the heart of their midfield. 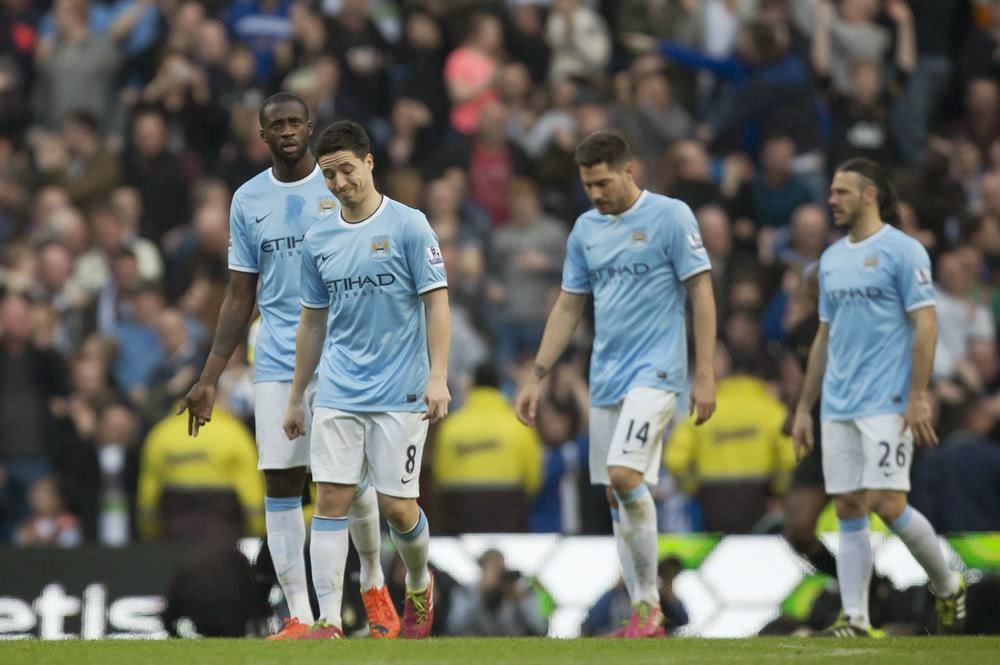 As previously mentioned, it wouldn’t be City if they did things the easy way, or as predicted, or in any way conventional. In fact, going on past experience, it wouldn’t be City if they had the Premier League trophy in the bag before the final day of the season. Last season, nobody could’ve really expected the away defeats at Cardiff and Aston Villa, although losing three points at the Stadium of Light has almost turned into a given of recent seasons. The 2-2 draw at home to Sunderland during the final few games proved to be an imperative point gained rather than two dropped when at the time many Blues had given up hope of the title.

But it’s the twists and turns that sets City apart from the rest. The club has a history of sending their fans on an emotional roller-coaster, from the much-maligned dark days of the late 1990s to the journey pre-takeover and beyond. Many of the recent commercially-attracted fans won’t be aware of just what a journey the club has been on to get to this point, many newborn Blues will only have the stories to listen to in disbelief of how sarcasm and self-deprecation carried a lot of City fans through those Saturdays of defeats by Stockport County at Maine Road.

Yet the drama has never once deserted them. It’s a relentless ride that prevents complacency from setting in, always remembering where the club has come from to get to the current heady days. Expect the drama to continue – always expect the unexpected.