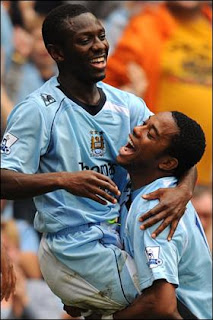 Hughes' Blues turn it on to blitz Portsmouth

Ever since the ADUD group shook the football world by staging their takeover of Manchester City and capturing the shock signing of Robinho on transfer deadline day, there has been a huge air of expectancy milling around Eastlands. The 3-1 defeat at the hands of Chelsea was disheartening but not discouraging and the 2-1 UEFA Cup victory against AC Omonia in Cyprus was definitely a big step in the right direction.

On paper, the match against Portsmouth should have been a close call. It turned out to be a completely comprehensive display of football brilliance and talent from City. It only took Jo 13 minutes to break the deadlock by skipping past the Portsmouth defence and slotting home. The Brazilian trio of Elano, Jo and Robinho teamed up superbly throughout the 90 minutes and it was 2-0 when Elano’s crafty corner skimmed low along the goal-line for Richard Dunne to knock home from unmissable range.

Harry Redknapp’s side went close with a couple of half chances from Peter Crouch and an effort was cleared off the line from Pablo Zabaleta, but it was after the break that Mark Hughes’ men went on the rampage. Robinho was simply world class as he left Portsmouth bewildered with his trickery and skill; step-overs, back-heels and dummies galore were all part of his samba magic show. His goal, City’s third, was both well-taken and well-deserved.

City’s favourite son Shaun Wright-Phillips made it four with a sublime and fierce shot from an acute angle and substitutes Ched Evans and Gelson Fernandes completed the rout.

It wasn’t that the visitors were poor. It was the fact that City was simply spellbinding. All the different elements came together: new signings Robinho, Jo and Zabaleta were much more settled and former youth stars Wright-Phillips and Ireland were both influential and threatening in creating opportunities and taking chances. Vincent Kompany played superbly in the centre, going about his job with timely tackles and precision through balls with style and ease.

At the final whistle, City fans rose to their feet and met the 11 players with a thunderous and rapturous ovation. The 6-0 score-line was certainly warranted and sent out a clear signal of intent both to the Premier League and to the new chairman, Khaldoon Al Mubarak, who was introduced before kick-off. A new precedent has been set for the so-called Top Four and, although it is still early days, City now sit pretty in 5th position in the Premier League while their neighbours United languish in 15th. With performances like this, it surely won’t be long before critics and Hughes’ fellow managers alike have to start taking City seriously as a potential threat to the Champions League places.