SURELY ONLY MATTER OF TIME BEFORE MANCHESTER CITY BITE THE BULLET? 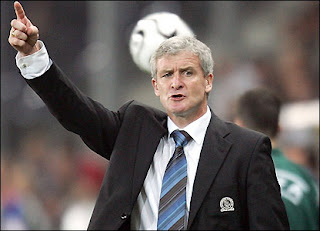 Football FanCast columnist Emily Brobyn feels it is a matter of when, not if, Mark Hughes leaves Manchester City.
The news of Luis Felipe Scolari's impromptu sacking from Chelsea sent shockwaves around the football world. Scolari lasted a mere seven months as Chelsea's hopes of securing their first title since the 2005/06 season drifted into the distance. Is this deserved? Did he have long enough in the role at Chelsea or have Roman Abramovich and Peter Kenyon sold the Brazilian manager short, despite his £7.5 million pay-off?

But Scolari isn't the only victim of power-mad chairmen who see fit to hire and fire managers who have barely decorated their offices after moving in. Tony Adams was only in charge at Portsmouth for 16 games, after being installed as a permanent replacement for Harry Redknapp, before being shown the door by chairman Peter Storrie. Paul Ince was another manager who was dismissed after a run of poor results, having only been in charge at Blackburn Rovers for four months.

Perhaps the catalyst for this unsavoury trend was the example of Sven Goran Eriksson at Manchester City. The former England manager was an unexpected answer to City's vacancy back in June 2007 and made an immediate impact, guiding the Blues to the top of the Premier League. But Eriksson was encouraged to join City through former chairman Thaksin Shinawatra, whose promises of a substantial war-chest failed to materialise much to the shock of the Swede. It is alleged that Eriksson knew he would be unemployed by the end of the season and that this contributed to City's appalling form during the second half of the season. It is also speculated that City's monstrous 8-1 defeat at the hands of Middlesbrough on the final day of the 2007/08 season was a direct protest by the players at the imminent departure of Eriksson.

Mark Hughes arrived at City in the summer of 2008 in a whirlwind of flashbulbs and, at the time, hope. Many City fans were still resentful over Eriksson's departure and remained unconvinced over the Welshman's appointment. Despite Hughes' record as a manager, he was somewhat tainted by his links for former club and City's arch rivals, Manchester United. Then, along came the money...

There is no doubt that the minute the billions arrived at Eastlands, the job at hand for Hughes increased in expectancy. Sheikh Mansour and Dr Sulaiman Al-Fahim reassured the Welshman that his job was not being negotiated and wasn't at stake, as superstar names and world marketing strategies were being discussed in City's boardroom. At that time, the season was a hopeful, optimistic one for the blue half of Manchester. The silky samba skills of Robinho had been delivered by the Sheikhs in a frenzied last-minute deadline day as a signal of their intent at turning City from football's ugly ducklings to an enviable force strong enough to penetrate the ‘top four'.

That was the intention. For some reason or another, it has failed to materialise. Jo and Tal Ben-Haim, two signings that, contrary to popular belief, weren't sought after by Hughes, have since gone out on loan and have been quick to point the blame in the direction of the City manager. It comes as no surprise that these two players were implicated as being ringleaders in the dressing room revolts that have become a regular occurrence at Eastlands, with an alleged 10 players voicing their displeasure at everything from Hughes' training methods to his lack of relationships and correspondence with players.

‘Player power' is certainly not a thing that should be encouraged. No one player, or a collective, should be bigger than the club. But if the manager is failing to motivate the players (the ridiculous cheques that they pick up every week should be motivation enough), is getting the tactics wrong and is fighting a battle of approval against the terraces, then how long should he be given to attempt to turn the club's fortunes around? This season is on the verge of being a waste; it is only because the Premier League is so close that City could either be challenging for Europe of fighting relegation. Which is it to be? Hughes has a fearful fixture list ahead of him, with away trips to Liverpool, West Ham and a UEFA Cup tie against Danish champions FC Copenhagen approaching. It is well-known how disastrous City's away form is- can something be conjured up?

But should the blame lie solely with Mark Hughes, or with the revolting players who remain intent of ousting him out of his position? These selection of players are aware that they are playing for the World's Richest Club, that they still pick up ludicrous sums of money whether they play superb or diabolical and many of them have inflated egos that make them difficult to deal with. Being cocky or difficult makes Hughes' job harder, but other managers have to deal with it. How about Alex Ferguson and Ronaldo? Ferguson has come across difficult players before- and has always emerged triumphant. Martin O'Neill and Phil Brown both have superb reputations. It is the sign of a good manager that they are able to deal with troublemakers appropriately and perhaps Hughes should learn to exert the power that he has at his disposal- before it's too late.

The off-the-pitch circumstances that have been reported haven't made life any easier at Eastlands. The allegations put towards both Robinho and Micah Richards, albeit in very different situations, have been unwelcome distractions. Michael Johnson, once tipped to be the next Colin Bell, is one of many City youngsters who are falling victim to a growing drinking culture at the club. Fortunately, Johnson has time on his side to get fit again after being sidelined through injury. But the temptations of drink and frivolity should his discouraged by the manager who should rule with an iron rod if necessary, especially when his reputation and job is at stake.

I personally believe that the job has become far too big for Hughes. I have been impressed by his signings, with Vincent Kompany and Pablo Zabaleta proving to be revelations. Shay Given is a proven, consistent figure between the goalposts and every City fan was grateful to see Shaun Wright-Phillips return to the club. But if he cannot communicate, encourage and control the dressing room, then what hope is there? Several high-profile players are alleged to be involved in the mutiny against Hughes, with two of them displaying just how capable they are of playing to their potential for their country last week. If Hughes doesn't have the management skills required for the task at hand, then why is he still in that position? Why is Mark Bowen conducting a lot of the activities? If players are alleged to be sabotaging performances as public protests against the manager, why don't fans voice their feelings?

A good example of Hughes' inexperience was demonstrated during his time as manager of his own country, Wales. His side won the first four games during the qualifying campaign for Euro 2004 and needed just one win, against Serbia-Montenegro. Hughes changed the tactics to playing just one striker upfront, and as a result, Wales failed to qualify. Perhaps it was Hughes being over-cautious, but many managers would have pushed on for the win and stuck with tactics that had already proven to be a winning formula.

Many City fans still remain hopeful that the season can finish positively and that Hughes can bring stability and consistency to the club. However, others fear for the future of the club under Hughes' guidance, despite the vast wealth at his disposal. Sven was given four months before he was informed of his future, even though he had done tremendously well for City. How long are City's new owners prepared to waste on finding out that Hughes is a liability with no hope of any longevity? Rumours are mounting that, if City go out of the UEFA Cup at the hands of FC Copenhagen, Hughes' time will be up and an interim manager will be drafted in until the end of the season. Will the players pull their finger out or continue their campaign against the Welshman? Or will it ultimately be Hughes' fault for proving to be severely lacking in the most vital areas of football management?