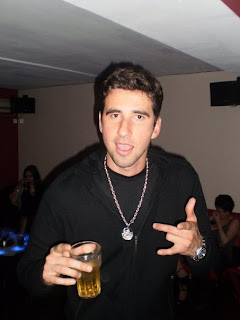 Here's a little bit of a laugh for you. The person above, in case you have never seen him, is Brazilian 'star' Glauber Berti. He actually allegedly plays for City yet has never made a first-team appearance for the club. The picture of Berti was taken in a Manchester club/bar where he was inevitably spending the thousands of pounds he 'earns' a week. This is the description of Berti as written on the official City site, www.mcfc.co.uk ...
"Formerly of Atlético Mineiro, Palmeiras and FC Nuremburg, Glauber Leandro Honorato Berti joined City on a one-year deal after leaving the Bundesliga in August 2008 and can play either as a central defender or a left back.
"Berti has one cap for the Brazilian national side, which he earned in a 3-0 win over Guatemala in 2005, but due to his family background he acquired Italian citizenship in 2006.
"He is yet to make his first appearance for City, but he has featured on the bench on several occasions."
Comedy or just plain stupid? YOU decide.