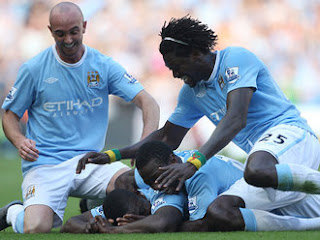 Mark Hughes’ new-look Manchester City have had it all their own way so far this season. Three consistent victories with clean sheets had thrust City into the driving seat, heading towards their top four target. But Hughes and City fans alike had earmarked the visit of Arsenal to Eastlands as their first stern test, a challenge to see just how far they had come to really competing with the big boys.
In the lead-up to the game, the blues’ innovative marketing division had splashed specially designed cartoon-style pictures of former Arsenal striker Emmanuel Adebayor across the city centre as part of their ‘top four’ intimidation efforts. Adebayor had spoken out after the Portsmouth game saying that ‘he wanted to repay the faith and love’ that City had shown him. The script had already been written, but would Adebayor be able to play the leading role or would he be cast as the villain?
He managed to pull off both. Not only did he get on the score-sheet, but his behaviour and antics during the 90 minutes have attracted an unprecedented amount of both criticism and column inches. It seems that everybody has got an opinion on both the tackles that Adebayor issued on Robin Van Persie and his goal celebration, when he ran the length of the pitch to celebrate in front of his former fans. What people have failed to mention is the torrents of racist abuse that Adebayor was forced to endure during both the pre-match warm-up and throughout the game from the Arsenal fans. They incited the reaction and it was the travelling fans who charged down towards the pitch and Adebayor and threw objects. The fans shouldn’t give the abuse if they are not willing to tolerate any form of response. Banter is part of the game.
Revenge
Where is the line drawn? Will players get banned from celebrating all together in fear of the response they will receive from away fans? Wayne Rooney kissing the United badge in front of Everton fans, Gary Neville flaunting himself in front of furious Liverpool fans, Thierry Henry running the length of the pitch to celebrate before Tottenham Hotspur fans. Even the recent flag-waving antics of Nathan Tyson for Nottingham Forest in front of despairing Derby fans...football fans will always give players abuse and torment, that is just part of the game, but should they react with such fury when, on the odd occasion, a player turns the tables and basks in his glory as a way of revenge.
The Togo striker receives an incredible wage for his job and with that does come a responsibility to compose himself both on and off the pitch. He has issues with how he was treated during his time at Arsenal and that should have been left off the pitch. He should have taken the upper hand and been a true professional, but the celebration was a gut reaction, one that he has since apologised for. If the F.A. were to ban him then it should be as a response to the Van Persie incident alone. The referee Mark Clattenburg issued a yellow card as a result of the celebration- it should be left at that.
Does anybody remember that City actually won the game 4-2? Or has the game and score-line been completely and ridiculously over-shadowed by the Adebayor witch-hunt? City produced a performance that showed just how they have managed to find the balance of grit and flair quite wonderfully. The strength of Gareth Barry and Nigel De Jong in the heart of midfield worked quite sublimely with the fire and dedication of Craig Bellamy, who battled hard from defence to attack and was more than worthy of his goal. Both Micah Richards and Shaun Wright-Phillips worked hard down the right to create chances and Kolo Toure was a rock in the heart of the City defence, showing Arsenal exactly what they are missing. Despite all of the Gunners’ flair, they struggled to defend competently and this proved to be their ultimate downfall.
Tenacious
City took the lead in the first-half after a Richards’ header rebounded into the net off Manuel Almunia and maintained that lead going into the break. Arsenal came out all guns blazing and grabbed an equaliser when Van Persie slotted the ball home neatly past Shay Given. But City remained tenacious and Joleon Lescott’s tackle on Gael Clichy was the catalyst for Wright-Phillips and Richards to combine, squaring the ball to Bellamy who calmly finished off the move to give City the advantage. Wright-Phillips and Adebayor then added to the tally and Tomas Rosicky provided a late consolation for Arsene Wenger.
Some City fans may suggest that the score-line flattered their side, but the message it sends out to the rest of the Premier League is four wins in four games. Four times that Adebayor has appeared on the score-sheet. The first real challenge, Arsenal, was vanquished in style. The next, a visit to Old Trafford, may prove to be much trickier, even more so if the F.A. issue Adebayor with a ban that is effective immediately.