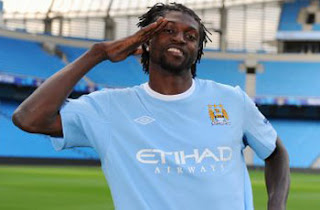 I must apologise for the silence on my blog this Bank Holiday weekend. I have been on holiday, the only holiday that I have had this year, so I had no internet access. But I am now back with a vengeance with plenty to talk about!
First up was the Carling Cup game against Crystal Palace on Thursday night. I listened to it in the car on my journey down south and for the first half it sounded like Palace played City off the park, having plenty of chances to take the lead. But the second half sounded like a different story- and the goals from Shaun Wright-Phillips and Carlos Tevez were well-taken. It was a hard-fought victory in a game where I felt the score-line flattered us. Perhaps the City of old would have succumbed to a cup upset against a tough Neil Warnock side, but this time City rode the storm and came out on top. Great to see Tevez bagging his first goal for the club and from a corner no less! I have spent a lot of time moaning about the lack of quality corners into the box from us, I guess that has shut me up. For now anyway.
Then it was a trip to Fratton Park on Sunday. On paper, there looked to be no contest. But Paul Hart’s side proved to be tenacious and quite stubborn. I think the most noticeable thing about City during the 90 minutes was the fact that they always seemed to look comfortable in defence and reliable, a relatively new trait. Gareth Barry is proving to be a crucial acquisition, providing cover in front of defence and linking up well with the attack. Mark Hughes made a good, positive decision to drop Robinho in favour of Craig Bellamy. The Brazilian tends to go missing away from home and Bellamy provided the necessary steel to aid our victory. Great to see Emmanuel Adebayor on the score-sheet again; three goals in three Premier League games so far and things will only get better for him. There’s so much more to the Togo striker’s game than just scoring: he helps out all over the field and isn’t afraid of getting his hands dirty in defence.
The transfer window saw a couple of familiar blue faces leave the club. First up, defender Tal Ben Haim headed south to join Portsmouth. Then Richard Dunne confirmed his move to Aston Villa. It’s very sad to see Irish defender leave, but it’s for the good of his career that he continues to play first team football as a pose to looking for starts from the bench. It goes without saying that he has been a true legend at City and every single fan is wishing him all the best.
So, it’s a fantastic start to the season so far. However the real test is on the horizon, when Arsene Wenger brings Arsenal to Eastlands in 10 days time. That’s when we will have a better and much clearer of just how far we have come. Will it be a repeat of the 3-0 win from last season? Who would bet against former Arsenal hit-man Adebayor continuing his scoring run against his former side? One thing’s for sure- I am BACK, with all of my anecdotes, opinions and interviews for your viewing pleasure!