NICKY SUMMERBEE EXCLUSIVE INTERVIEW
“Any club I played for I always wore big shorts, always looked a bit scruffy, and ran in a lazy swagger. But I was working hard. I worked just as hard as anybody else in that team. I suppose that was just my style” 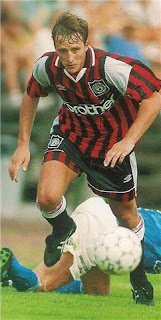 Football Pundette caught up with one of City’s most misunderstood players and asked him about his dad, his memories and his hopes for the future of a football club he holds so close to his heart.
Some may see it as a blessing, some a curse. The moment Nicky Summerbee graced the pitch after his signing from Swindon Town to Manchester City in the summer of 1994, the older proportion of the crowd became touched with nostalgia. It had been 19 years since his father, Mike, had played for the Blues and made exactly the same first transfer. Just the sight of the famous surname on his son’s shirt had fans excited and intrigued.
Playing in the same position as his hugely successful senior, Nicky was soon creating a ‘buzz’, with his wing partnership with Peter Beagrie paying dividends. But the team then-manager Brian Horton helped to create was dismantled by Alan Ball and a plethora of various managers that followed in quick succession following the club’s relegation in 1996. Nicky became disheartened and went on to play for the likes of Sunderland, Bolton Wanderers, Leicester City, Nottingham Forest and Bradford City before retiring in 2006.
FP: Did your father’s career influence your decision to become a footballer?
NS:
Basically I was born with it. I went to the games with my dad and it’s just your lifestyle. Everywhere I went I would go and watch City. I was just born into it. My dad’s dad who I never met, George, used to play for Preston North End, obviously dad played and then I played so football really is in the family.
FP: When you moved from Swinton to Manchester City in 1994, was you aware of the pressure that your surname would invite?
NS: Yes I was, but what do you do, not get out of bed? You have to deal with it. On one hand it’s helped me, with my dad being able to help me in certain situations in football. But it went against me really. It was hard. It was a lot tougher than someone whose dad wasn’t famous. But I knew about it and just had to get on with it. Some people would just refer to me as Mike, I even had a journalist call me Mike during an interview. It’s something that I just took on the chin and accepted.
At the end the City fans were a bit unfair on me, but I don’t think that I helped myself. If I look back now I probably would have done a few things different. But with going to City I was always going to come up against my dad’s name; at the end it really wasn’t nice with mum and dad, but at the start there really was no problem so I don’t regret anything.
FP: You got to play with the likes of Paul Walsh, Uwe Rosler and Niall Quinn at City. What was that like?
NS:
Amazing. Obviously I played with Quinn up at Sunderland as well. If they would have kept those players there at City and then built on that...I mean you had Tony Coton, Terry Phelan, Keith Curle, Garry Flitcroft, Steve Lomas and then Georgi came. If you would have kept those players, they were much ahead of their time really. But they got rid of those players and it didn’t work out.
But to play with them was great. In 1994, the season when I came, it was ideal because I was playing as a winger and Brian Horton played out-and-out wingers. So there was Peter Beagrie and I feeding Quinn and Walsh and together made one of the highest goal-scorers in the Premier League, even though we conceded a lot. It would have been nice if we would have had another year together, we probably would have matured a lot. 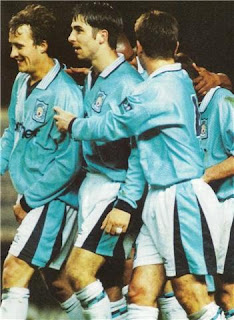 FP: Did you play in the Liverpool relegation game? What did you think when Alan Ball told you to keep the ball and play for a draw?
NS: I was a substitute on that day, it was awful. We were getting battered, it was terrible. We couldn’t just keep the ball for 25 minutes against Liverpool! Then Quinn came running out and said that all the other teams were winning...we thought that we had done it, we thought the draw would be enough. The final whistle was devastating. Really bad times. As a player it’s just not good whatsoever. Alan Ball was a World Cup winner. I just don’t think that he brought the best out of the players if I’m honest. He wasn’t a great manager.
FP: Is it true that you had the quickest shot in world football at one point?
NS:
One thing I’ll always remember from that day though is shaking Roy Castle’s hand before I headed to the bar and he said to me: “Just be careful, there’s a lot of smoke up there”. At the time I didn’t think anything of that comment, but he later died of passive smoking. That really sticks in my mind.
FP: Tell us the story of your supposed race with Georgi Kinkladze on the M56.
NS: At the time Georgi had just bought a Ferrari so we parked the cars up at a hotel in Hale and went into town for a bit of something to eat. On the way back I asked him to give one of my mates a bit of a spin in his new car. So Georgi was driving and as we came out of the hotel, he took a left to go down to Wilmslow and I let him go past me. As he went past me he accelerated but the car span and he crashed into a wall. They both immediately got ejected out and landed on their feet on the road. It was awful. Georgi was alright, but as he turned round he had these scratches on his back, it looked like a bear had attacked his back. It was covered in really deep cuts.
I remember Georgi’s first game back at City after his recovery from the crash. The pitch announcer was reading the teams out and when he got to Georgi he said: “And number 10, straight from Daytona, Georgi Kinkladze!” He was just a young lad in a fast car who didn’t really know the power behind the accelerator. Looking back, it could have been a lot worse. 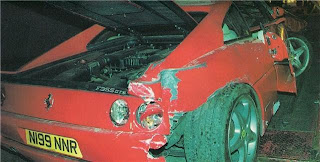