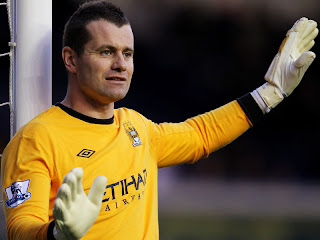 I haven’t written for a while as you may have noticed. But please accept my apology for the absence and I’m here now to try and dissect the action that has incurred during the past fortnight because, as always, a lot has happened.

The visit of Fulham to Eastlands was always going to be a tricky one in my eyes. Roy Hodgson’s team have beat City for the past two seasons in Manchester and I was apprehensive about how City would figure this time. I think I’m right to say that the first 45 was a bit hit-and-miss, although Micah Richards’ had a headed goal disallowed for reasons unbeknown to me at the time. After several further replays at half-time, Match of the Day clarified for me when I got home that Gareth Barry had impeded. A very harsh decision- if the goal would have stood the game could have had a different dimension to it.

Carlos Tevez and Emmanuel Adebayor both went close to giving City the lead, but it was defender Joleon Lescott after the break that scored during a goal-mouth scramble. Martin Petrov doubled the lead with an effort that rocketed past Mark Schwarzer and at that point, the Blues looked comfortable and set for a possible riot. But Damien Duff and Clint Dempsey both slotted past Shay Given to give Fulham a point. It was frustrating to give away a cushioned lead, but Fulham have troubled us a lot in the past, so a point is definitely better than none.

Brighton, Lincoln, Forest, Blackpool...teams that City have succumbed to in the past during early rounds of a Cup. I should have felt reasonably confident having seen a home tie against Scunthorpe United drawn for Mark Hughes’ side. But I remained pessimistic and a little bit nervous as the two teams kicked off.

My early doubts were firmly shrugged off with a confident and classy 5-1 victory for City. Goals from Stephen Ireland, Roque Santa Cruz, Lescott (two in two), Tevez and substitute Michael Johnson sent City flying into the Carling Cup quarter-finals. What made it all the more special was that each goal was taken so well, particularly the final goal from Johnson. I really hope he gets the chance to prove himself and to put up a decent fight into the team, but it’s going to prove a difficult task, with former Player of the Season Ireland having to settle for a substitute role at the moment.

Blackburn, Chelsea, United, Portsmouth, Villa, Arsenal and Spurs are all also in with a chance of winning the Carling Cup. I think it was essential that we got a home tie- so we have drawn Arsenal at Eastlands, but it could have been a lot worse. Arsene Wenger has a reputation of playing his kids in the Carling Cup, but he may be keen to vindicate the 4-2 defeat against City earlier in the season.

On to St. Andrews, home of Birmingham City, where the Blues from Manchester were searching for their first league win since September. But Alex McLeish’s side were stubborn and determined throughout the 90 minutes. Shay Given was forced to make a string of excellent saves, including saving a penalty from James McFadden. City seemed out-of-sorts and struggled to create opportunities in the final third but battled well and came away with a point. Vincent Kompany was playing in the heart of defence with Kolo Toure out injured and Stephen Ireland was once again introduced to the game from the bench.

Should Ireland be included in the starting eleven to provide that kind of creative influence in midfield? If so, which player should be dropped? This is exactly the kind of (welcome) headache that Hughes knew he would have to encounter and it seems like he is still tinkering with finding the right starting eleven and suitable formation to accommodate those players.

Look at the positives: City have only been beaten once so far this season, and that was by a last-gasp, much-debated goal at Old Trafford. At the moment the Blues occupy a Champions League spot in the Premier League table and a quarter-final place in the Carling Cup. Shay Given has proved to be an outstanding snip at £8 million, Nigel De Jong is both terrifying and bullish in the engine room and Craig Bellamy has become a reformed and successful character, winning praise from all angles.

There was a game that I watched during the last weekend that blew me away. Chelsea’s display against Bolton was simply phenomenal. Their fourth goal, including a cheeky back-heel from Frank Lampard with the slick move finished by Didier Drogba, was sublime and a testament to the team spirit and work ethic that’s going on at Stamford Bridge. Right now the Blues seem unstoppable. But Carlo Ancellotti will have to deal with the absence of several of his star players at the turn of the year with the African Cup of Nations on the horizon. With the club under a transfer embargo, Ancellotti will have to ‘make do’ with what resources he already has in West London.

Liverpool are a very interesting side right now. I mentioned in a previous column about their ‘beach-ball’ fiasco, but the club have even bigger issues right now with their imminent trip to Lyon in the Champions League possibly deciding their fate in Europe. I do rate Rafa Benitez as a manager but he has made some questionable signings and his tactics and decisions can leave a lot to be desired. The two significant players in his side are Steven Gerrard and Fernando Torres- but take them out of the equation and the Merseyside team are vulnerable, exposed and unpredictable. Watch this space.

This show is going from strength to strength and this week was no exception. Ian Cheeseman, Paul Lake and I tackled the ‘Munich debate’, regarding the appalling chants that a minority of City fans continue to indulge in. We had Kari Dodson, grand-daughter of Frank Swift on the phone and she was a revelation, offering a really touching and personal side to the subject.

We also featured interviews with Tony Coleman (pre-record) and Niall Quinn (live). Coleman has caused a lot of controversy with his forthright and opinionated views on Australia and its citizens. Quinny was excellent and refreshingly honest, talking about his ‘disco pants’, his admiration for Bellamy and his jealousy for City’s situation right now. If you missed it, head to the BBC iPlayer to ‘Listen Again’. Its well worth it I promise you.

Next week though we have a two-hour special, with Ian coming live from Abu Dhabi. We’re really working hard on content for the show and it will definitely prove to be unmissable, with the focus going on the club’s takeover and highlighting Abu Dhabi. Plus we have also just had a significant figure at City confirm that he will be on as a guest in a couple of weeks. Exciting times.

I think the main disappointment from City fans has been our failure to really capitalise on other teams at the top slipping up. Every side in the Top Four have been dropping points and there have been plenty of opportunities to seize momentum and rise even further in the table. But there are far too many positives right now at the club and with Burnley visiting Eastlands this Saturday, there may be even more reason to celebrate come 5pm...