NICKY WEAVER EXCLUSIVE INTERVIEW
“People think being a footballer is all about driving a Ferrari and going out with a Spice Girl. It’s not. Far from it” 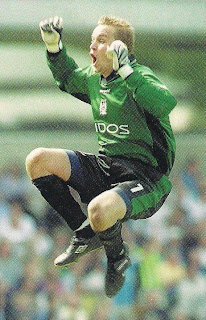 In part two of a three-part exclusive interview, Weaver tells us about his favourite moment in a City shirt (it’s not just about Wembley), how his career has been resurrected by n anonymous dead man and what he thought when he played in goal while David James played upfront at the City of Manchester Stadium.

20 year-old Sheffield-born goalkeeper Nicky Weaver was living his dream. After his 1999 Wembley play-off final heroics helped to send City into Division One, the following 1999/2000 season culminated in City gaining promotion back into the Premier League after a 4-1 victory against Blackburn at Ewood Park.
“I really enjoyed the Blackburn game, possibly on a par with Wembley. Blackburn hit the woodwork about four times in that first half too. I remember Ashley Ward blasting the ball past me and I turned round thinking it was going in the net but it hit the post and came straight back into my hands. At that point I thought it was going to be our day. Then they scored an own goal. I remember the first half I looked out to my left and there was a gap in the stands with a grass bank and it was just blue. City fans were everywhere.
“We had been 1-0 down but came back to lead 4-1 with about 15 minutes to go. We pretty much knew we’d won it and the City fans were just spread right the way around Ewood Park. It was a boiling hot day and the pitch was full at the end of the game. I’ve got some photos, albums of those first couple of seasons. Every now and then when I visit mum and dad we’ll have a look at them, it’s something to show the grandkids.”
Back-to-back promotions from the-then third tier to the elite made Weaver both a Premier League and England under-21 goalkeeper. But City’s return to the top flight didn’t quite go according to plan. The club was relegated at the end of the 2000/01 season and manager Joe Royle was axed.
“We probably went up a year too soon”
“I don’t think the success changed me, I think it changes people around you. Suddenly everybody wants to be your best mate and everybody’s hanging onto your coat tails. I was still only 21 at the time and a lot of the players had never played in the top flight before.
“Looking back, we probably went up too soon. The journey to get there was absolutely fantastic and something you don’t see that often. We probably went up a year too soon. But it was great for me to playing in the Premier League at such an early age, but we struggled and got relegated. That brings you straight back down to earth with a bang. It’s not a nice feeling. People think being a footballer is all about driving a Ferrari and going out with a Spice Girl. It’s not. Far from it. But luckily we got back up again and stayed there since. I think I was at the club for six seasons before City actually stayed in the first season twice on the bounce.
“When Joe Royle got sacked, a lot of people pointed the finger at the supposed drinking culture at the club. I’m not saying the lads didn’t go out and have a good time, but I think if you would have been top of the league, nobody would have said anything. The fact that we got relegated and there was a few ‘incidents’ along the way it obviously gets highlighted when a team is struggling. If it was now, things may have possibly been done different. Football’s changed so much since then. But it’s a learning curve, there were a lot of young lads in the team and looking back we probably shouldn’t have gone out and partied so much, but it’s something that can’t be changed.” 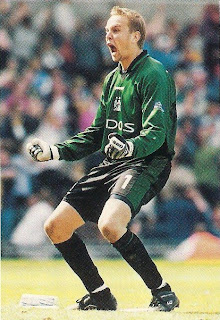 City bounced back again at the first attempt and have remained in the Premier League since. But with City flying high again under the leadership of Kevin Keegan, Weaver’s world was about to be disrupted by an injury that nearly forced him into early retirement.
“I did it away at Birmingham. I think it was March 5th 2002. I just dived and when I landed I felt something weird in my knee. I carried on for a few minutes but eventually had to come off. I had a little cartilage operation which is pretty routine for footballers and was thinking I’d be out for about five or six weeks. I came back, it wasn’t quite right, came back again, wasn’t right again and that’s when I first realised there might be a problem. I had two more operations and again wasn’t right and then I went over to America.”
“I would have been 25. It would have been a tragedy”
“When you’re flying half-way around the world and surgeons in England telling you they don’t know what the problem is, that’s when I realised I had big problems. I went to America, had another two operations, they were unsuccessful and then resorted to the final operation which entailed removing a cartilage from a dead person and putting it in my knee.
“At the time I had to wait for the right donor before the surgery could be done. But once the call came I was straight out to America, operation done, then five weeks recovery out there. I think the surgery lasted five hours, that’s quite a long time. I’ve actually seen the DVD of the operation and it’s really not pretty. It’s really unusual and quite ironic that a dead man’s cartilage has saved my career. I asked the hospital if there was any chance to find out who the donor was so I could write their family a letter. Obviously it would probably offer them no consolation for their loss but I thought it may be nice for them to hear how grateful I am, but they couldn’t give me the information. I’ll always be grateful for it though.
“I think I’m still the only British footballer to ever have that procedure done and I took a big risk- my body could have rejected it. The doctors and surgeons advised that if that would have failed, that would have been the end for me. I would have been 25. It would have been a tragedy. But the knee has been great since then, I’ve played over 100 games since it and hopefully I can play on for many years to come. I was doing rehabilitation in the gym on it for well over three years. But now I think I’m lucky to be back.”
“It was one of the most bizarre things I’ve ever seen...but it nearly worked”
The road to recovery was both long and frustrating for Weaver. David Seaman had been filling his boots until the former Arsenal goalkeeper retired. Then David James signed for City. With the competition for the number one spot fierce, it was an unlikely substitution in the final game of the 2004/05 season against Middlesboro that saw Weaver back in front of the adoring City fans. City needed a victory to secure a place in the UEFA Cup. Cometh the hour, cometh the...goalkeeper? 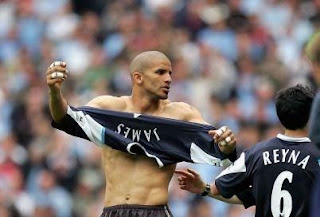 “I didn’t know about it. James knew about it and he referred to it after the game as ‘the plan’. I was just sat on the bench, there was about 15 minutes to go and at that point we were drawing 1-1 but needed the win to get us into Europe. I was sat on the bench next to Jon Macken and Tim Flowers turned round to me and told me to get warmed up. I thought he was talking to Macken!
"I was stunned. But he told me I was going on, I couldn’t believe it. I could understand if it was a nothing game and he just wanted to give me a few minutes or whatever but I couldn’t get my head around it. Then I saw Chappy (Les Chapman, City’s kit man) pull an outfield shirt out with ‘James’ on the back. I just couldn’t really grasp what was going on. But something clicked and I realised that James was going outfield and I was in goal.
“So I ran up and down a couple of times and then I went on. I was still pretty much in shock. Then the fourth official held the board up and showed that Claudio was coming off, and I was going on, and everybody was just baffled really. But Jamo came sprinting over to take his top off and the penny dropped. Once he put the outfield top on, he ran one way and I ran the other. It was one of the most bizarre things I’ve ever seen...but it nearly worked. James caused havoc upfront, he didn’t know what he was doing but it was something that Boro didn’t expect. He did a couple of bad challenges too. We got a penalty and you would have backed Robbie Fowler to score but Mark Schwarzer pulled off a great save and we didn’t make it.
“It was a tactic that Psycho said wouldn’t happen again but James is a big guy and if we would have got a couple of corners who knows. It just caused panic and uncertainty. If Robbie would have scored the penalty and we would have gone on into Europe it would have been deemed a masterstroke. As it was, everybody just looks at it as a bit of a laugh. I was gutted City didn’t get into Europe but on a personal note was delighted to get on the pitch. I remember making a save off Stewart Downing and the crowd gave me an unbelievable reception. It was the first time I’d featured in two or three years so it was unbelievable. It’s another memory that makes me smile.”
In the final part of a three-part exclusive interview, Weaver tells us about his favourite managers, players, why he left City, what he thinks about the club now and which goalkeepers he would be reserving seats for on the plane to South Africa. Not to mention his thoughts on a potential Andy Morrison-Mike Tyson clash...