I’ve not written on here for what seems like an age and for that I’d like to apologise. It’s been a really busy time of late: I’ve now got a full-time position at one of the best football clubs going that is allowing me to put my training and journalism skills to good use. It’s going fabulously and life is good at the moment. But I will try to keep this updated as often as possible as it’s been my ‘baby’ since I started it back at university.

It’s been an eventful old summer. The World Cup (only just) kept me entertained; I know it’s a cliché but summers without football are so boring and tend to drag disturbingly. Whether it’s the Euros or the World Cup, it’s exciting and always great to pick out the ‘ones to watch’. I won’t even mention England’s dismal showing (oops, too late), but the team I was probably most impressed with was Germany. The organisation and commitment they displayed was superb considering it was quite a young team. Mesut Ozil really caught my eye along with Thomas Muller, both of whom are 21 and 20 years-old respectively. Okay, so Germany didn’t win it, but they finished third and certainly look a top prospect for the future.

Much talk was made of Paul the psychic octopus too. The unusual star of the tournament made headline news worldwide for accurately predicting every winner of every game through the South African tournament. Didn’t see that coming! Other elements of the World Cup I enjoyed were: the presence of Diego Maradona on the touch-lines (yes he’s controversial, but he’s also full of passion, England could have done with some of that), the South Africa team’s dancing to the pitch (genius), U.S.A. raising eyebrows with their run of form (The David Beckham Factor perhaps) and Ghana being the last home nation team standing (valiant effort). One thing I didn’t enjoy- the vuvuzelas. The less said about those the better. 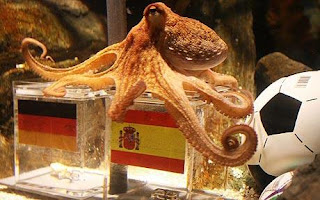 But the World Cup seemed to be over as soon as it had begun and now the new 2010/11 season is upon us. It’s time to pick the fantasy football teams, lay your bets and buy the latest club shirts because Premier League football (and lots of others besides) is back. Who’ll get relegated, who’ll make the Champions League, who knows. Rumours abound that Blackpool haven’t prepared properly for what lies ahead and they could be the worst Premier League team ever. I don’t care too much for that. I’m just looking forward to having an away-day near the Golden Mile. But it’s definitely the novelty factor that I like about Blackpool and Ian Holloway is going to make Match of the Day a Saturday night must (but they could do with a ‘pundit’ clearout on there, most of them are misery personified).

A lot has been made recently of Cesc Fabregas and Barcelona. The Arsenal star was pictured in a Barca shirt during Spain’s World Cup celebrations and he’s made no secret of his desire to link up with Pep Guardiola. I understand that he’s a fan favourite and Gunners everywhere are hugely reluctant to let him go, but if a player really wants to leave them there really isn’t much you can do. Seven years is a good duration and the money received by Arsene Wenger can be put towards investing in the future. Heroes are made, they come and go, but there will be another one for the Emirates Stadium to celebrate soon enough. Perhaps Wenger would be wise to use some of the potential money to purchase a goalkeeper... 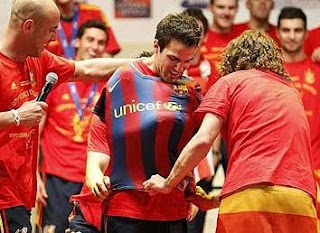 I can’t really talk about City too much. Let’s just say that I’m incredibly excited for the new season and the potential it holds for the Blues. Summer purchases so far have all been players that have been involved in the World Cup, which speaks volumes and throws out a huge message of intent to the ‘top four’. To be honest, I don’t particularly think there is a top four anymore. I think this season will see a huge shake-up of the old order. I remember teams used to be fearful of playing Manchester United- that fear has subsided. They aren’t the team and club they used to be and there may be a window of opportunity for teams, the likes of City, Spurs, perhaps even Everton, to seize the chance and just go for it.

The interesting one may be Liverpool: with Roy Hodgson, fresh from the Europa League final at the helm, new signing Joe Cole and Steven Gerrard and Fernando Torres pledging their future, who knows where the Anfield lot are heading. Last season was a huge disappointment for all concerned, but a new manager brings both a new perspective but also a fear of the unknown. How will it go? Good or bad? The Liverpool fans seemed to greet Hodgson’s appointment with a mixed reaction, I just wonder if the job is a little too big for him. He massively over-achieved with Fulham last season, will it be the opposite this time?

If you want to get in touch, go for it, my email address is on here so don’t be shy.

Here’s to the new season and everything that comes with it. It’s bloody good to be back.