STARTING THE NEW YEAR ON THE WRITE FOOT
One of my New Year’s resolutions for 2011 was to adamantly write even more than I already do. I have to admit, I was pretty horrified when I checked my blog, a blog that I once spent hours and hours adorning with opinion and interviews, to see that my last update was August. August! It’s just not acceptable from a woman who used to get silly little butterflies on clicking the send button on my content.
As is the case with the game of football that we all know and love, so much has happened since my last contribution, things that could and would only happen in our beautiful game. England tried- and failed- in their bid to be the hosts of the 2018 World Cup. I have to admit, it was quite gut-wrenching watched Sepp Blatter open the envelope to smugly reveal the name of Russia instead of our own Three Lions. Wills looked embarrassed, Becks looked mortified...yet Roman Abramovich looked understandably thrilled. Perhaps he needs to stop spending money on bribing FIFA delegates and concentrate on introducing fresh blood to his tired Chelsea squad (allegedly folks). 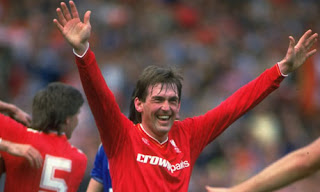 Liverpool have ceased to exist as a big club and, as a result, have roped in the services of a certain Kenny Dalglish in a desperate attempt to salvage the wreckage from a miserable season. The blame should lie more with the players than scapegoat Roy Hodgson, with Fernando Torres epically contradicting the description of his playing position and Steven Gerrard’s inconsistency failing to carry the team through as it once did.
Managers have become fickle folly more than ever. Chris Hughton was unceremoniously fired by Mike Ashley, who claims to be a Newcastle United fan yet does nothing but upset his fans and spin the managerial merry-go-round quicker than Ashley Cole puts it about. Sam Allardyce was axed from the Ewood Park chicken farm, with Diego ‘hand of God and other controversies‘ Maradona rumoured to be lined up to replace him. At one point recently, the rumour mill had its pick of four different managers to put up for the chop after an evening of dismal results left Hodgson, Carlo Ancelotti, Avram Grant and Gerard Houllier all poised to collect their P45s. Even if it is the minority at football clubs, fans have become increasingly impatient when teams clock up erratic results. Gone are the days of ‘let’s give him a chance’, the pressure and expectancy to succeed is greater than ever. Recent photographs of signs reading ‘Abramovich out’ illustrates how naive and pathetic the minority really can be.
‘Squeaky clean’ Theo Walcott has spoken out, admitting that he attempted to cheat his way into winning a penalty during his side’s F.A. Cup third round game against Leeds United. “I had a laugh about it” and “it’s just football” are not defensive statements when you admit attempting to bring the game into disrepute. If you fancy continuing with those antics, follow Tom Daley’s trail instead of lowering the tone even more than Dimitar Berbatov did against Liverpool Theo. Cheating has no place in football, yet Walcott’s quotes were intriguing as he also disclosed that "I have heard some players say 'if there is a slight touch go down.’” That must be the philosophy that the likes of Didier Drogba follow in order to wrap another champions medal around their neck. Some fans may perversely enjoy it, I for one think it spoils the game and leaves a bitter taste in the mouth.
David Beckham has been courting more press of late. Firstly due to his involvement in the failed World Cup bid (to which I think he did an incredible and touching job). Next up was Becks collecting a lifetime achievement award at the BBC Sports Personality of the year awards, another tear-fest. Now he’s taken residence at Spurs Lodge, Tottenham’s training ground, to boost his fitness and perhaps make a cameo in Harry Redknapp’s season. I have to admit, I am a huge fan of Beckham. He is the perfect role model and inspiration for fans and young children alike. He’s a great ambassador for the game and I am quite proud that he’s English. Before you ask, no I don’t fancy him. I simply admire his career and the contribution and effect he has had on football as a whole. I don’t think he has what it takes to manage, but it would be interesting to see if he would consider and be capable of it.
Much has been made recently of Ryan Babel’s Twitter picture ‘scandal’. I personally think that it’s ridiculous; Twitter is very much about having banter and the majority of it is very light-hearted. The likes of Robbie Savage and Rio Ferdinand all engage in harmless banter and I think that it’s a good medium for people to interact with the sportsmen on. Where is the justice when Babel is punished for a gut reaction after a painful Cup defeat to Manchester United, yet Walcott’s cheating admission is barely chastised. There seems to be a huge lack of consistency within the F.A. and their decisions. I’ve no doubt this may scare footballers off signing up to the social networking site, which is a shame really. Who will my boyfriend be able to give a substantial amount of grief too then? 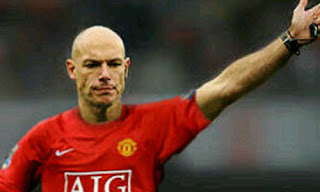 I won’t/can’t say much about City apart from I obviously delighted at the current league position and the team’s form over Christmas. I’m really looking forward to seeing the new signing, Edin Dzeko in action too. The title race is already incredibly exciting this season, with the form of both Liverpool and Chelsea opening the doors for a selection of top four ‘fringe teams’ to mount a challenge. It pains me to admit that Manchester United do look to be in pole position right now. But there’s still plenty of time for the momentum to swing and the order to shift. If Arsenal are to be considered they must learn that consistency is the key. Arsene Wenger can’t keep making significant changes to the starting line-up between games and expect to grind out results week in week out. Another factor that may play a part is the Champions League- can the teams at the top maintain both their league and European challenges or will something have to give? Either way it all adds to the suspense.
I think I’m getting back in my writing habit. It’s bloggy marvellous!

Welcome back to the blogworld Pundette!! Jeff - TheMaineMoFo