Like most fans, when I was a young football fan I would always look forward to watching the FA Cup final. It’s always on a bright sunny day in May and I always viewed it as the flagship game of the season. On the day I’d make sure I was doing nothing so I could watch every minute of the build-up: the teams taking to the pitch in their shirts before the game, the pre-match hype through interviews and memoirs and the 90 minutes that would decide what colour ribbons would adorn the most traditional of football trophies.

Usually, watching this prestigious event would fill me with envy. Every year it seemed to be the same teams competing for the silverware, every year the winners really did take it all. The earliest match that I remember was Tottenham Hotspur, who beat Nottingham Forest 2-1 in 1991 to lift the trophy. That was the game when Paul Gascoigne was charging round the pitch like a bull in a china shop and injured himself during a tackle, resulting in a cruciate knee injury. I used to wish every year that my team could form a serious cup run and end up playing at Wembley, every season my dreams would be crushed, usually at the hands of a lower league side. As I grew older, this fantasy would only increase, the desire would never dwindle.

I’ve previously posted an article about how amazing my FA Cup semi final adventure against Manchester United was. Although we had an incredible time that day, reaching the final was unequivocally special. Repeating the day again, this time knowing that we were 90 minutes away from silverware, would prove to be more nerve-wracking than the five minutes of injury time during the semi. We were facing Stoke, who had beat Bolton Wanderers in their semi by a 5-0 score-line. I couldn’t take Stoke for granted: they have always proved to be a bit of a bogey team for us and are a strong and physical side that are difficult to break down. They would be no pushovers- and their manager Tony Pulis would be gunning for revenge after managing Gillingham during THAT epic Division Two play-off final back in 1999. I was much more apprehensive than I was before the previous game at Wembley. 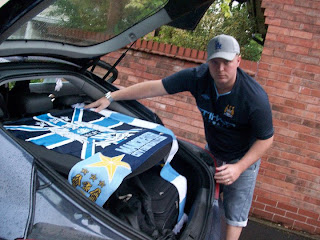 This time, I was going down south with my brother Simon and my boyfriend Chris. Simon had been on holiday for the semi final and had joked that at least he would be able to make the final if we got there. The joke paid off and the three of us headed down south on the Friday night after work to get to our hotel in Watford. When we got there, we met up with a colleague of mine John and his wife, Amanda. Chris and I had met them at the semi in the Green Man beer garden and our plans this time round were more or less the same. We enjoyed a few alcoholic beverages that evening, ordered an immense takeaway pizza and headed to bed full of anticipation for the day ahead.

I was the definition of giddy when I woke up. The boys were probably worse than me and, as we headed down to line our stomachs with a full English, the hotel breakfast buffet was a hive of activity- full of both sets of fans displaying their replica shirts and exchanging jovial banter. I ate as much as I could manage without being sick and we headed off to the nearest tube station to get to the Green Man pub. This was 9:30am, probably the earliest that I’d ever drank a pint before! We headed for Wembley Park tube station all discussing the possibilities and probabilities of the day ahead. 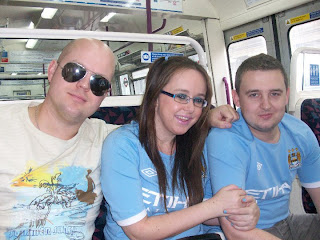 Simon, me and Chris en route to the Green Man pub

When we arrived at our location the pub was already heaving full of Blues. Pints were being enjoyed, songs were bring sung and people were even tempting fate by having their photographs taken with a replica FA Cup. It was an infectious and optimistic atmosphere, one that was continued throughout the walk to Wembley. I couldn’t believe how electric it all was, being involved in such a day was phenomenal. All those years of wishing I could be there, the dream had finally come true. The dream now was to walk away with the trophy and celebrate into the night. 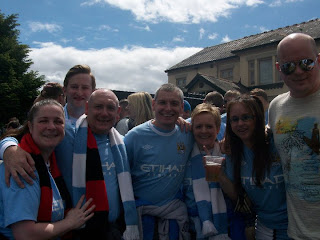 The gang at the Green Man pub

The game itself was probably a let-down for the neutrals, but being there it seemed so intense and close between the two teams. I was incredibly anxious. We sat next to a young couple of a similar age to me and Chris and they were nervous wrecks! I endured a melting pot of emotions: the butterflies, stomach cramps and heart pounding, hoping for the breakthrough goal that City’s performance deserved. Half time came and went and the game, still goal-less, was petering out. Chances were few and far between and it was looking like a single goal would be enough.

When Stoke City striker Kenwyne Jones broke through the City defence, it looked certain that his goal would be the winner. Yet somehow Joe Hart produced a fine stop to deny him, an incredible feat on top of his record-breaking season. With time ticking on, I couldn’t help but think of the extra time looking ahead. A quick flash in my head remembered 1999 and the tension. I couldn’t bear that again. Then came the breakthrough- the semi final hero Yaya Toure struck again to send the blue half of Wembley on a rocket into orbit. Chris burst into tears, I was screaming deliriously and everybody embarked on a frenzied Poznan. We were winning in the FA Cup final, 15 minutes away from silverware. Unbelievable.

Those final 15 minutes seemed to take a year to tick down. 15, 14, 13...anxious glances were exchanged between the jubilant if not gobsmacked Blues around me. The Potters piled the pressure on in added time but even the appearance of their goalkeeper Thomas Sorensen in the box couldn’t make a difference. The full time whistle blew and the place erupted with mass celebration. I was hugging everybody around me and Chris was deliriously bewildered, wondering if the past 93 minutes had been an indulgent dream. It wasn’t. Carlos Tevez led the triumphant City team up the famous steps and lifted the FA Cup to a crescendo of acclaim. 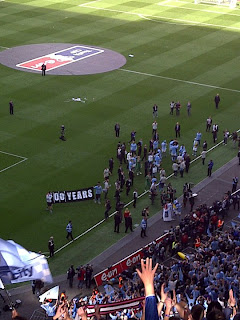 What a day it was. Watching the team-mates drench each other with champagne, adorned with suitably daft jester heads and blue wigs, and seeing them unveil a ‘0 years’ banner to replace United’s outdated, irrelevant and insignificant jibe. Every moment was special and every moment was savoured. We stayed in Wembley until the players began to filter off the pitch and then slowly ventured away to begin our festivities in earnest. 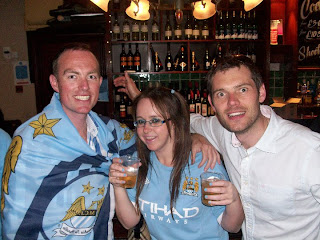 With Spenny and Brock in West Hampstead post-match

The rest of the evening was spent in a pub in West Hampstead with our long-time City friends Spenny and Brock (who I’ve written about many times on here). The pub was rocking and full of Blues, all drinking and trying to come to terms with the events of the day. We were FA Cup winners and not even repeating that out loud numerous times would help to realise just how significant it was. No more ‘typical City’, the much-promised new era had arrived- along with Champions League group stage football at the City of Manchester Stadium. 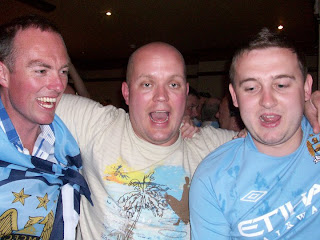 A celebratory Poznan in the pub
We celebrated all night, stumbled back to the hotel and the next day headed gingerly back up north, displaying our blue scarves proudly out of each window of Simon’s car. The motorway was littered with City fans- yet the service stations were full of West Ham fans travelling to Wigan to see if their club could survive relegation. I felt empathy for each and every one of them and I almost felt bad for wearing my City shirt in front of them. Some congratulated us, some mocked us yet despite everything, I’ll never forget what the pain of relegation feels like. But right at that moment the taste of victory was still fresh on my lips, the pride of the win enveloped me. To me, the day had been a blur but the headlines hammered it home. The dream had truly been realised- the dream has only just begun.