THE ONLY WAY IS CITY: A SEMI-CHARMED LIFE
I remember writing an article after the dust had settled 12 years ago when City beat Gillingham in the Division Two play-offs and I was still in shock writing it and reminiscing on the events of that day. I can’t believe I’m doing a similar thing again- albeit in very different circumstances. I’m still in shock, still a bit teary... it all feels a bit of a blur and that I’ll wake up at any minute. I’ve got the newspapers from April 17th that confirm just how real the day before really was and the Sky+ of the match is definitely set to ‘keep’-until the DVD of the day is released, that is.

I love how everybody has their own memories of the day. Randomly, it was my 29th birthday, so for the first time in my life I had opened cards and presents the night before. With getting up at 5am, there really was no time for much. Me, my boyfriend Chris, his brother Ross and his friend Max all gathered bleary-eyed in our front room, bags packed, ready to hit the road. I wanted to leave early to just get down there and avoid any kind of potential traffic headache.

Driving down, all of us commented on how the enormity of the game hadn’t quite hit us yet. We were travelling down south to Wembley to watch City play United in an FA Cup semi final Manchester derby- it was virtually unheard of (apart from 1926, City beat United 3-0). I get sick to the stomach with nerves when we play the neighbours as it is, I couldn’t comprehend what the day would hold. There would be heroes, villains and only one team would be guaranteed bragging rights and a place in the final.

The drive down was a breeze. The motorways were filled with cars displaying blue and white scarves fluttering in the spring breeze and I beeped at every one I passed, all waving at each other, giving the thumbs up and the ‘come on’ gestures. We stopped a couple of times as the lads had decided to have beers for their breakfast, but got into central London for just gone 9am and headed straight for a full English, in an attempt to settle the nerves. It didn’t work, although it provided a good layer for the stomach bearing in mind our next port of call was the most talked-about pub in Wembley- the Green Man. 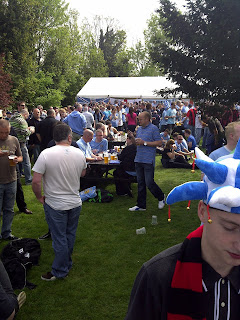 The Green Man was a sea of blue shirts in the middle of a housing estate. A pub with an ample beer garden, on arrival we promptly ordered beers at the bar and headed outside. The day was turning out to be glorious, warm sunshine only encouraged the barbecue smoke and shirtless men with pints littered the scenery. There were City fans sat on the grass, stood on the tables, occupying the beer tent...everywhere you looked it was blue shirts, huge flags, apprehensive looks mixed with hope and passion unrivalled. As the late kick-off approached, the chorus of songs reached a crescendo- I believed for one, I’d been saying to everybody all week to be confident and to have faith in the team’s ability. I had almost a sixth sense about the game; I never thought for one second that we would get beat. The idea just wasn’t considered. 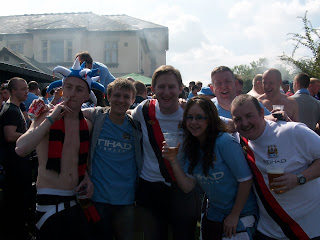 By this point, heading to Wembley was a bit of a blur (come on, it was my birthday!). We reached a roundabout where it was absolute mayhem, City fans as far as the eye could see, all chanting and cheering, all heading for the stadium. The atmosphere was optimistic, hopeful and infectious, tinged with a certain air of ‘what if’. What if we actually managed a win? What if we had the chance to rip that infamous banner in the Stretford End once and for all? What the hell is wrong with believing?

The game was a sketchy haze of anxiety and tension. I remember doing the ‘Poznan’ when United’s team-sheet was read out, that must have been quite a sight for the television cameras! The hairs on the back of my neck prickled every time we sung Blue Moon. Over 30,000 Blues willed the team to victory; men, women and children all hoping to be able to say they were there when history began to change.

Through the Dimitar Berbatov miss to half time, I admit I was in a mindset where I thought that they would nick a goal. I felt sick, a mixture of beer and faintish panic drowning the butterflies in my stomach. But as soon as City started the second half, something was different. There seemed to be a drive and added determination on the pitch- and it wasn’t long before the deadlock was broken. 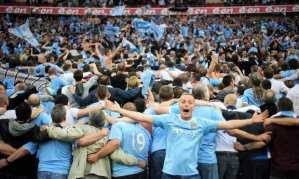 When I saw Yaya Toure’s shot hit the back of the net, everything turned into slow motion. I mounted Chris, kissing him deliriously and hugging the lads behind us frantically. We all did the most frantic, unbelievable ‘Poznan’ while, open-mouthed, people looked round at each other. Did it really happen? Are we winning? Can we win this? Even when Paul Scholes was sent off, City fans were all too familiar with United’s knack of scoring last-minute goals against us. Nothing could be taken for granted, nor celebrated, nor believed, until the final whistle was blown.

When the board went up displaying five minutes of extra time, my heart sank. I should have thought about how we’d played an excellent half of football yet all the good work would be undone in an instant with a late equaliser. But I didn’t. I knew this was it. An older lady was in front of me, possibly in her late sixties. We looked at each other, both crying, and she turned to sit down with her head in her hands. I reached for her hand.

“Watch the game,” I said. “Watch these final five minutes because this is our time. This is our result. Don’t worry- just enjoy being part of something so special.”

She hugged me and kissed me on the cheek and did indeed watch the final minutes of the semi final. One of the lads behind me had a stopwatch on his BlackBerry and kept showing us the amount of time that was left. 4:10, 3:38, 2:19...it was agony. But then- mesmeric euphoria. Streams of tears of joy, bear hugs, kisses with strangers, embraces. The roar of Blue Moon engulfed Wembley to be met with masses of empty seats at the opposing end. We had done it, we had deserved the result and we were through to the FA Cup final- an event I had grown up watching as a little girl, dreaming of the day my team in blue would be involved. 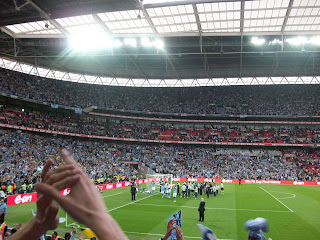 Dream no more. It has happened. I intended on continuing the birthday/win celebrations, but by the time we had got back to our hotel, it was late and I was exhausted from the emotions of the day (not to mention the 5am wake-up call). It just didn’t feel real, it still doesn’t. Singing ‘we’re not really here’ in Wembley after beating our local rivals to earn a place in one of the most traditional, respected cup competitions in football, the meaning of it reached a whole new level of irony. 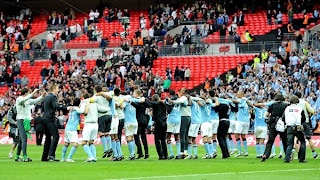 Those same scarves that fluttered so proudly and hopefully on the journey down the day before were just as evident on the drive back home. A congregation of City fans who had witnessed a defining 95 minutes of football in the English national stadium, an incredibly memorable occasion that will forever live in the annals of supporter experience.

People speak about turning tides, I just genuinely didn’t think I’d ever get to see my team play in a final during my lifetime. Now it’s only the beginning, a new lifetime of memories. I’ll never forget where we’ve come from and what we’ve been through, I just can’t help being excited to see what the future may hold.

Lovely piece Emily!! You've captured the emotion of the occasion (for me, at least), and made me feel the same as I did while watching, trying to choke back a tear (unsuccessfully, I might add), reminding me of my last trip to Wembley, 30 years previous, and desperate not to have us reach the same conclusion - and the absolute elation when that whistle blew, the roar of the faithful - fantastic!
Here's to City and the rise of the Blue Moon! Come on City!
Jon W

That took me back, Emily! I was proud to have been there and, while I was reading this, you made me feel nervous and exhilarated all over again. And it was good to meet a certain pundette in the Green Man! Keep up the good work!