COMING BACK TO WHAT YOU KNOW- FOOTBALL IS BACK!
It’s incredible how quickly this summer has gone. I really didn’t want to say goodbye to the 2010/11 season but it doesn’t seem two minutes since City were lifting the FA Cup, finishing third and now it’s the Community Shield on Sunday. Crazy. I, like the other millions of football fans, get so excited at the prospect of what a new season may bring, not only to the club I support, but to the Premier League and beyond. I also love those few few months of the season, when you can go and watch your team home and away in the sunshine before the inevitable layers are piled on as the winter months set in. Indian summers provide the backdrop for surprising starts, unexpected league positions and new signings desperate to impress. Let the fun and games begin. 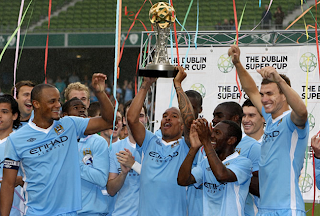 Can City push for the title? Will Liverpool, buoyed by their summer spending, be back in the supposed ‘Sky Four’? Can Harry get Spurs back into the Champions League without the distraction of playing in said competition? Will Swansea be able to really compete amongst the big boys? So many questions, with the answers set to be revealed over the next nine months.

My biggest surprise over the summer has been Arsenal. Arsene Wenger, at the time of writing, still hasn’t signed a new goalkeeper, but has signed winger Gervinho. The Frenchman has sold Denilson, Gael Clichy with Samir Nasri and Cesc Fabregas still debating their futures. After surrendering their automatic Champions League qualification place on the final day of last season, it will be an intriguing campaign for Arsenal fans to see if Wenger has still got the determination and hunger to bring success to the Emirates Stadium. I’m a big fan of Wenger but even I’m a bit dubious of him, his temper and sore loser syndrome of late. 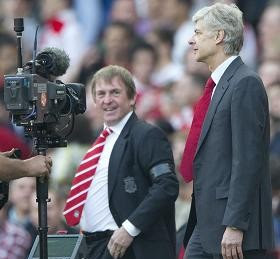 With yet another new manager at Stamford Bridge, Chelsea is always a club that attracts attention. Attention like when football fans waited 903 minutes for £50 million man Fernando Torres to score his first goal there since his signing in January 2010 and attention when Carlo Ancelotti was relieved of his duties come May. Now 33 year-old Andre Villas-Boas and his assistant, former Chelsea man Roberto Di Matteo have been employed to attempt to bring the elusive Champions League trophy to West London. Still vying for the services of Luka Modric, I was most impressed by defender David Luiz last season, who had settled in superbly and looked solid and fluid in defence alongside John Terry. If Torres has settled in and found his consistent goal-scoring form, they really could be a force to be reckoned with. The word could is crucial in that sentence. 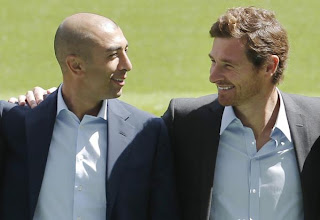 Kenny Dalglish has been given a generous transfer budget by Liverpool owner John W. Henry this summer to strength the side’s chances of forcing their way back into the previous concept of the ‘Sky Four’. Former Blackpool star man and captain Charlie Adam is an exciting acquisition, although for me the jury remains out on Stewart Downing. Jordan Henderson is a 21 year-old midfielder that holds a lot of promise and certainly caught the eye during his time at Sunderland and Brazilian goalkeeper Alexander Doni is a shrewd move for ‘King Kenny’. Comparisons have been drawn already to the signings that Roy Hodgson made this time last year and Dalglish’s purchases and investment into buying English footballers represent an investment in Liverpool’s future as well as reflecting his desire to maintain the pace with the Premier League’s big spenders. Anything they can do, he can do just as well it seems. 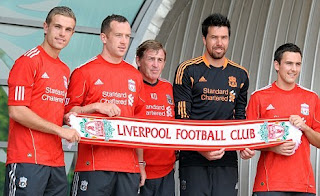 I can’t say a great deal about City as always, but I remain confident about the season ahead. More new faces have been brought in, with Gael Clichy, Stefan Savic and Sergio Aguero all jumping on board, and it will be fascinating to see how the season unfolds and how Roberto Mancini approaches the games- and the Champions League. A special mention must also go to a manager making his debut in English football in League One this season. Former City striker and cult hero Uwe Rosler has joined Brentford on an initial two-year contract and is looking for as much support as possible to help assist his first season. I’ve never had a ‘second team’ before but I’ll definitely be keeping an eye on the League One results and table from now on- the very best of luck with everything Uwe! 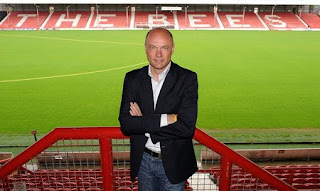 I was going to do a bit of a prediction as to who will be up there and who will be experiencing the heart-breaking relegation saga come May, but I think that’s a bit silly before anybody’s kicked a ball. It’s good to see Norwich back in the big time and the return of Neil Warnock may not be as quirky as Ian Hollway’s presence, but will still add to the laughs nonetheless. I think Newcastle will struggle and I don’t blame Joey Barton for his outbursts, he’s merely highlighting his frustrations, albeit in a very clichéd way. It’s a shame as I used to love watching the Newcastle of old. Philippe Albert, Pavel Srnicek and David Ginola may not have all been world-beaters, but that 1995/96 season was one of the most entertaining and possibly my favourite Premier League season so far (apart from last season as far as City’s concerned, of course!). 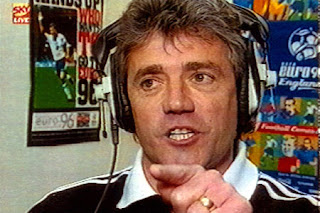 Finally, I’d just like to give a mention (randomly) to Birmingham City. Relegated from the Premier League last season despite winning the Carling Cup and robbed of their manager Alex McLeish by neighbours Aston Villa, the new addition to the Championship have had a bumpy few months. At the moment there seems to be no signs of stopping the rot as owner Carson Yeung’s bank assets have been frozen as a result of his money laundering-related arrest. Why can’t there be further and more clinical investigations before football club owners are given the green light? Portsmouth nearly ceased to exist as a club, Liverpool’s name was dragged through the mud and Glazer’s ethics at United are questionable to say the least. But it’s always the fans of the clubs that suffer as a result of dodgy dealers and shady owners. For the supporters, their football club is their love, their hobby and their life and is not to be messed with. But for some owners, a football club is a business, an investment and merely a way of making revenue without any due care or concern given to the consequences of how it is run. It needs to change- the sooner, the better.

Good luck to all the clubs and fans ahead of the new season kick-off- football is back and don’t we just love it!