THE MAN WITH THE GOLDEN KUN 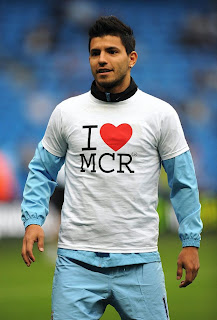 Unless you've been on planet Neptune for the past 24 hours, you will have heard about the somewhat eye-catching substitute debut from City's new boy, Sergio Aguero. 'Kun' came on during the Blues' Premier League tie against Swansea and almost scored with his first touch. Within 30 minutes Diego Maradona's son-in-law had managed to score two goals and assist David Silva with a third- his second goal being an absolute beaut of a strike. All this and boss Roberto Mancini claimed in the post-match interview that Kun isn't near being 100% fit yet. 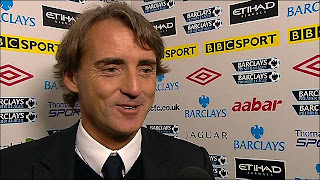 If you listen faintly, that sound is boots quaking from opposition defenders trying to digest Mancini's remark. It's no disrespect to Swansea either, they did play well during periods of the game, but the 4-0 score represents the clinical masterclass executed once City had scored. I've personally never witnessed a debut quite like it; whenever Aguero got the ball he gave me goosebumps. I couldn't wait to see what he'd do next. Energy, enthusiasm, pace, sublime ball control and an understanding with his team mates normally only witnessed after a season or so with his club, never mind his debut. Did I mention he's only 23 years old? Scary.

On a final note, if you think my praise is a little erm...generous...I'll let Lionel Messi say what I'm really thinking. And I do actually use genuine Messi quotes:

"I have no doubt that he will be successful at City," the Barcelona striker stated.

"He will give them a real cutting edge. He's unique- he has immense power, strength and an incredible work ethic. City have signed a very exceptional player.

"He was excited by the challenge and ambition of City. Money isn't a motivating factor for him. He loves a challenge. He wants to win trophies and obviously feels the move offers him that opportunity in England."

Light the blue touch paper and stand back. After an explosive debut like that, who knows what's in store for City- and Aguero- this season.