EVERY LITTLE THING GIO DID WAS MAGIC

A tribute to Georgi Kinkladze, the former City midfielder and his twinkle-toed talent. 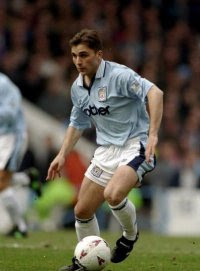 It was a dull, overcast day in deep Moss Side. Over 30,000 people were gathered in the Main, North, Platt Lane and Kippax stands watching City take on Reading in the then-Endsleigh League Division One. It was a dour encounter, a mediocre match littered with average displays and a distinct lack of passion for the sky blue shirts the players adorned. Rain began descending from the grey sky, dampening the supporters’ spirits further. An air of gloom lingered around Maine Road.

Suddenly- goose-bumps. Butterflies. Amaze and awe. The ball had reached a player of relatively average height, whose twinkle toes defied even the most switched-on and adept opponent. A dip of the shoulder, a change of direction and he was away. The crowd rose to their feet as the midfielder danced his way across the turf, leaving players in his wake. A fellow midfielder screamed in acres of space with his hands aloft, crying out for the ball, but the ball stuck to the magician’s feet like a magnetic symphony. Anticipation enveloped the stadium as the goalposts came into view and the run was almost complete. Creating just enough room to get his shot away, his left foot clipped the ball and it skimmed through the air, grazing the right post as the crowd gasped.

A mesmeric shining light in a dark sky- that was Georgi Kinkladze. During the torrid times that City endured throughout the mid to late 1990s, Kinkladze single-handedly lit up my season ticket. It didn’t matter if we were playing Swindon Town at home or Port Vale away: the 90 minutes of every game were littered by sprinklings of the midfielder’s unique brand of magic dust. I’d sit in bewildered awe in the Kippax stand feeling lucky to be in the company of such talent. We may have had mismatched stands, a plastic seagull swinging from the roof of the Kippax and declining fortunes, but we had Georgi Kinkladze and nobody else did. 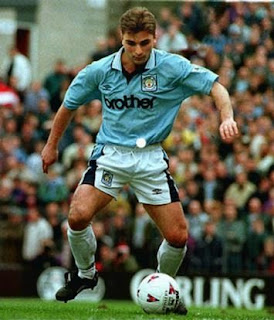 Kinkladze or ‘Gio’ as he was nicknamed was born in Tbilisi in Georgia in July 1973. His parents Robinzon and Khatuna had very different ideas of what they wanted their son to do: his father Robinzon enrolled him in Dynamo Tbilisi’s junior side and his mother Khatuna took him for lessons in traditional Russian ballet. It may have been divided interests in the Kinkladze household, but the seemingly strange concoction of ballet and the beautiful game knitted seamlessly together to create a sublimely talented footballer.

After playing for Mretebi Tbilisi, Kinkladze moved back to Dynamo Tbilisi, helping the side to a League and Club double in his first year there. However, civil unrest continued throughout the then-Soviet Union and the Georgian flirted with a number of clubs in an attempt to gain a move abroad. FC Saarbrucken, Atletico Madrid, Real Madrid and Boca Juniors were all linked with the Georgian before a deal was agreed with City’s chairman at the time, Francis Lee, to bring Kinkladze to Manchester. The move was finalised in July 1995 and Kinkladze was unveiled with Lee and the Blues’ manager, Alan Ball. The midfielder was somewhat of a mystery to City fans, an unknown quantity. All that was soon to change.

The Georgian joined City BC- before crisis. The 1995/96 campaign, his first season in the Premier League, was to be City’s last in the top flight for a number of years. He scored his opening goal in the Blues 1-0 win over Aston Villa but the goal that most fans remember him for was his stunning solo effort against Southampton in City’s 2-1 win at Maine Road. If you’ve never had the pleasure of watching this goal, watch it NOW. It epitomises everything that was so special and remarkable about the talent of Kinkladze. He beat five opponents before chipping the ball over Southampton goalkeeper Dave Beasant. A truly beautiful goal created by the unique cohesion of Kinkladze’s hobbies growing up: the product of the unusual combination of ballet and football displayed to the eyes of the world. 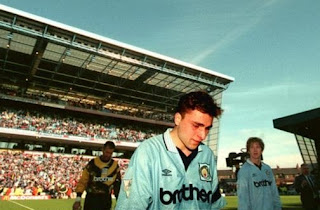 When City were relegated at the end of the season after a 2-2 draw with Liverpool at home, the moment was summed up with a photograph of Kinkladze’s tears as the Georgian headed down the tunnel. Many fans, including me, feared it would be the last time he would grace the pitch in sky blue, with a number of clubs queuing up for his signature. But the 1995/96 Player of the Year opted to stay and his talent continued throughout the 1996/97 season. He played under five managers and scored 12 goals including spectacular free kicks. I remember going to the final game of the season, when we beat Reading 3-2, and fans were literally begging Kinkladze to stay. Constant adverts flashed up on the makeshift scoreboards, all mentioning Gio’s name accompanied by various personal pleas. He didn’t even play as he was injured, but he was a hero. Our hero. He couldn’t leave. 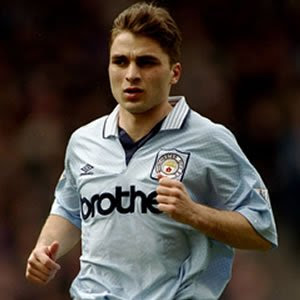 Despite not gaining promotion straight back to the Premier League, Kinkladze pledged his future to the club by signing a three year contract at City. But when new manager Joe Royle came in, Kinkladze fell out of favour. Royle’s idea of play didn’t involve the ‘luxury’ of Kinkladze, instead favouring a more aggressive, physical approach (hence the arrival of a player like Andy Morrison). He might have light up my season ticket and many dull matches, but his flame was being extinguished at the club where the fans had just been grateful of some form of entertainment to accompany their otherwise consistently mediocre Saturday afternoons. Royle allegedly blamed Kinkladze for City’s current form and couldn’t wait to sell the Georgian. On that fateful day back in May 1998, when the Blues were relegated to Division Two after beating Stoke City 5-2 at the Britannia stadium, Kinkladze made his final appearance in a City shirt before being sold to Dutch club Ajax for £5 million.

It was a bittersweet moment in the history of being a blue. I adored Kinkladze; he was the first player I had on the back of my shirt and, although I may have been biased, his talent and skill was like nothing I’d seen for City before. Colin Bell and Mike Summerbee were long before my time so seeing Kinkladze play in the flesh was a treat like no other. But I knew we also faced a challenge like no other- getting out of the then third tier of football. I loved a flair player, but we needed battlers, players who could grasp the challenge that lay ahead with both hands and drag the Club out of the mire and back where it rightfully belonged- the Premier League. I’m not ashamed to admit that I cried over Kinkladze’s departure (as well as the awful relegations that he endured with the club). 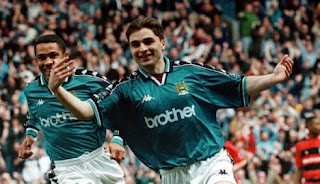 The little Georgian went onto enjoy varied success post-City, playing for Ajax, Derby County, Anorthosis Famagusta and Rubin Kazan as well as continuing to represent his country Georgia at national level. Since his time at City the Club has gone through complete reinvention, with incredible players like Mario Balotelli, Sergio Aguero, Edin Dzeko and David Silva all wearing the sky blue and creating magic of their very own to continue wowing the City faithful.

Many current fans won’t be familiar with Georgi Kinkladze. But those fans that are lucky enough to recall watching Gio weave his own particular brand of magic throughout the days where success and victory for the Blues was few and far between will always have fond memories. A little part of my heart will always be devoted to the Georgian, the player who I used to watch in wide-eyed fascination as a teenager who used to get teased rotten for supporting City instead of other, more successful clubs in the Premier League. Who’s laughing now? Never forget where you came from- and who kept your faith shining brightly along the way.