"Football itself evolves and every game has got a twist, a turn, a bit of controversy. You just can't beat it for me. It's such a fantastic buzz." 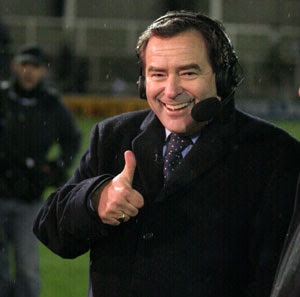 He’s the man who brings you minute-by-minute updates and action throughout the busiest days in the football calendar- and he does it in his own incomparable way. In the first part of an exclusive three-part interview, Football Pundette chats to the ultimate football anchorman, the enigmatic Hartlepool fanatic, Jeff Stelling.

There is nothing quite like a 3pm kick-off on a Saturday afternoon. It’s what weekends are all about. The great football institution that is going to your local ground to watch and cheer on your beloved team come rain or shine may have evolved throughout the years but the spirit and passion remains unequivocal and unrivalled.

Yet there is nobody quite like the sports presenter that spends every Saturday afternoon talking about such football games. From Berwick to Brighton, throughout countless Leagues and unbelievable moments, he’s the man whose infectious passion and engaging banter lightens up our television screens and accompanies the unfolding football drama. There’s nobody on television as charismatic, entertaining, hilarious and unpredictable as Jeff Stelling. The captain of Sky’s Gillette Soccer Saturday team, Stelling is a master of his craft. Nobody delivers Saturday afternoon score-lines quite like Stelling does, with such vigour, passion and originality. It’s spontaneous live broadcasting at its very best. 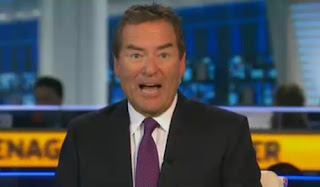 His panel of former footballers in the studio in Isleworth, West London, range from Phil Thompson to Matt Le Tissier and Paul Merson, who simply watch a football game each and keep the viewing public up-to-date on the events and controversies throughout the 90 minutes. The format is simplicity personified yet so incredibly successful and addictive, with a huge cult following every weekend. The show is Stelling’s pride and joy: a glistening jewel in his career crown. Just how did this man from the north east become one of the most trusted and popular voices in football broadcasting?

The 56 year-old admits that, when growing up in Hartlepool, sport as a whole was his love and obsession.

“I was into all sports really,” he said. “When I was a lad, there wasn’t a great deal else to do. You had to be into sport, it was the biggest form of entertainment. Whether it was playing football, cricket or rugby then I would try it, although I wasn’t very good at any of it.

“My local team was Hartlepool, so I starting to support them when I was very young and I’ve never stopped since. I wouldn’t say I loved every sport, but I’ve got a passion for a number and I can sit and watch most of them.” 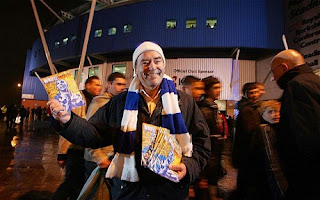 That passion for sport led Stelling into a career in journalism, one that began with a spell at a local newspaper, before working for his local radio station then travelling down to London to work at LBC radio, a primarily current affairs station. It was during his time here that he was asked to work for TV-am, the previously successful breakfast show on ITV. The job offered a route into television for Stelling, but still remains the most unsavoury position he’s held during his career.

“I hated it,” he sighed. “Sport was way down the agenda. I would sit there writing an overnight sports bulletin and I had 12 hours to write 200 words, something that only took me 20 minutes. It drove me mad. The rest of the time I would just sit around, or do a tiny film report. It was frustrating. I was working amongst people who just didn’t understand sport at all. Unless it was a test match or a World Cup, they had no interest in it whatsoever.”

Yet the position opened doors for Stelling in television and after presenting the Olympic Games for the BBC in both 1984 and 1988, in 1994 the dream job that became the making of him came along. He became a presenter of Sky’s Sports Saturday programme, a show that later became fondly known as Gillette Soccer Saturday. Working initially with former footballers-turned-pundits Rodney Marsh, Frank McLintock, Chris Kamara and the late George Best, Stelling led viewers through the twists and turns that came with football games up and down the country on Saturdays. The show was original, unique and grew stupendously in its success. Viewers became hooked on a programme that made football games dynamic and enticing without showing any of the match action, a credit that’s largely down to the personalities involved in the programme.

“I think there are a few secrets to the show’s success,” Stelling stated. “It was a first; although there have been a few imitators since, the fact that we got our foot through the door first was important. It combines information with entertainment: the show is on air for six hours and that’s a long time just to fire statistics at people, so we try and make it entertaining as well. We try to have an element of humour and controversy in there. The mix has got to be right- you can’t be flippant or too serious all the time. 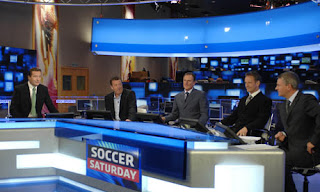 “The panellists have got to be right too; whether it was in the earlier days when it was Rodney Marsh and Frank McLintock or now with Paul Merson, Matt Le Tissier and Phil Thompson, the chemistry between them has got to be right and they’ve got to be willing to give a view and not just sit on the fence. Too many other programmes shall we say, have people who are not willing to say what they really think. You won’t please everybody all the time with what you say. None of our gang want to be in management and I think that’s the problem with other channels, one or two of them have still got eyes on getting into football management so don’t want to offend or upset people. It’s also important too that Sky have given us the latitude to do or say things that wouldn’t be acceptable on the BBC in particular. It’s all those things- information, humour, controversy, good panel- the lot really, that have made us so successful.

“My favourite on-air moment so far, although I could pick from many, was involving relegation from the Football League. It was a Saturday afternoon where either Carlisle or Scarborough could go down. I think there was an element where Hartlepool were involved in it as well. The Scarborough game finished first and Carlisle continued. They were drawing at the time. I remember seeing pictures of the Scarborough fans sitting on the pitch at their ground and waiting for the Carlisle game to end. In the 94 minutes, the Carlisle goal-keeper Jimmy Glass came upfront and scored- because of that Carlisle survived and Scarborough went down.

“It was just an amazing moment to witness and to see the contrasting emotions at the same time. We often have the scenario repeated in Premier League and League football. The difference back then in being relegated to the then-Conference was that not many clubs came back up, if they survived at all. Scarborough never did come back and eventually the club folded. It was just a fantastic moment. 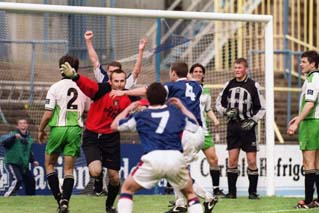 “Things often shock me on the show too. There have been some serious things obviously, but what shocked me the most was when Chris Kamara missed the sending off of Anthony Vanden Borre at Portsmouth. (watch it here). Kammy was covering Portsmouth v Blackburn and Chris being Chris it was inevitable that something was going to happen. Chris sees alls the bizarre things: the 6-4s, the 7-5s, the ‘phantom goal’ in the game between Watford and Reading...he’s been at them all so it was inevitable. We’d been told that there’d been a red card at Fratton Park, we went straight over there to Chris and the rest of it was history. He was gob-smacked and didn’t know a thing about it. I told him to count the number of players on the field so eventually he established, by using his fingers, that there were indeed only 10 players on the field for Portsmouth. He hadn’t been paying attention and he thought he’d just been substituted. It was a surprise rather than a shock really, but eventful nonetheless. 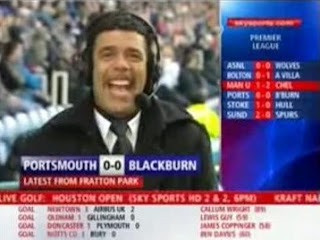 “When Kammy’s around, it’s always eventful. He’s television gold. It’s wonderful because he’s established himself at a fantastic place in television. Kammy will be the first to admit that he wasn’t the greatest footballer that ever lived. Most of our pundits, whether they be the George Bests or the Rodney Marshs, have always been footballers who have been right at the top of their profession. Kammy wasn’t quite that, although he was a heck of a lot better than me. For him to carve out the position in television like he’s done is genius really. The funny thing about Kammy is, although he comes over as being gaffe-prone, he’s really very informed when it comes to football. He’s in constant communication with managers up and down the country, people ring him for advice and he’s a bright guy. The way things have turned out...well, all I can say is ‘unbelievable Kammy!’”

“Don’t get me wrong,” he said. “Some Thursdays when I’ve been sat in front of my computer for eight or nine hours and my head is spinning, that can be not so great. It can be quite frustrating when you’re trying to find out who scored East Stirling’s goal against Berwick. But every Saturday is the best part of my job, every Saturday between 3pm and 4:50pm, and also the final 20 minutes of our programme, is just great. It’s such a fantastic buzz. I’ve been doing it for so many years yet I still get that same buzz. Football is never the same; it’s just so unpredictable year by year and game by game. Football itself evolves and every game has got a twist, a turn, a bit of controversy...you just can’t beat it for me. 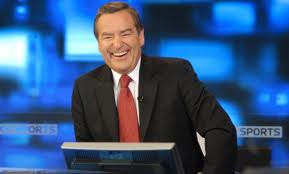 “I was hopeless as a footballer. I was a Sunday morning footballer. So the fact that I can sit amongst people who have had glorious football careers and get paid for watching a game that I couldn’t play but absolutely love is just fantastic really. I know I’ve got the best job in the world, I absolutely love it. My main ambition to be brutally honest is to continue doing Soccer Saturday for as long as humanly possible.”

In part two I’ll be asking Jeff quick-fire questions on: the infamous Soccer Saturday drinking game, his tips for the trophies this season, his favourite player and his thoughts on the current Premier League leaders, Manchester City.

Great piece, Emily! A mate of mine once met him at a wedding and told me he was a great bloke but a right nutter! He's an integral part of my Saturday, too, except when we're at a City game, obviously! Looking forward to Part 2.

A great read Em. You should follow it up with an interview with Kammy and or one of the other guys off the show.