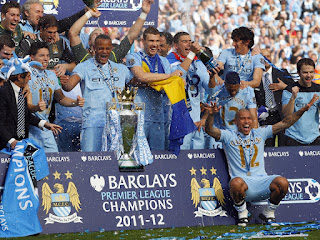 A visit to Kro bar in Piccadilly to meet up with the match-day gang provided beverages but little solace to quell the queasiest of stomachs. The venue was full of City fans collectively mulling over what could possibly unfold over the next few hours. Everybody sensed it was going to be a life-changing day for the club, a defining moment in the history and progression of the much-publicised new era of City. It had the potential to be the end of an era and the dawn of a new beginning, the farewell to ‘typical City’ once and for all.

Why not? The Blues no longer had Bob Taylor, Tony Vaughan and Jamie Pollock on their team-sheet; they had been replaced by world-beaters who had vast experience of knowing how to win silverware. These players have played in a World Cup final, in a Champions League final and FA Cup finals. Nigel De Jong, Yaya Toure and Sergio Aguero. David Silva, Joe Hart and Vincent Kompany. After trailing United by eight points in April, five wins later our fate was back in our own hands. We’d earned the right to define our own destiny, could we make history and cross the finish line as Champions?

City Square was heaving with fans all decked out in their finest blue attire ready for the 90 minutes ahead. The expectation and apprehension was palpable, the Manchester rivalry was at boiling point, level on points at the summit with City having the goal difference advantage. QPR fans had one eye on events at the Britannia Stadium, knowing Bolton’s must-win game against Stoke could have a detrimental effect on their Premier League future. It was all to play for. We headed inside the ground for beers and more what-if discussions before kick-off was upon us. The moment had arrived: the Etihad Stadium crackled with an electric atmosphere under a clear blue sky, drenched in sunshine and full to capacity. Both teams took to the pitch with a roar of anticipation and hope. Nobody could have been ridiculous enough to have written the script to accompany the events that lay ahead.

The story that unfolded was nothing short of remarkable. QPR fans cheering when nothing had happened on the pitch meant that Stoke had taken the lead, only for Bolton to pull level and gain the advantage themselves. A goal from Wayne Rooney at United’s game away in Sunderland meant a tense first half unfolded, with City dominating possession but struggling to definitively break former Blues’ manager Mark Hughes’ current side down. 39 minutes gone and with Yaya Toure, the  hero from the 2-0 win in Newcastle limping, Pablo Zabaleta skipped through the Rangers’ defence and clipped the ball over goalkeeper Paddy Kenny. The goal gave City a 1-0 lead and eased tension inside the stadium as delirious fans celebrated. As long as United were winning in Wearside, only three points would make City champions. Anything else and the Blues would be second best. At that point with Bolton winning, QPR needed the three points to prevent relegation to the Championship.


Half time came and went in a haze and the final 45 minutes of the season opened with an equaliser from Djibril Cisse. The home contingency looked on aghast, my heart sunk into the pit of my stomach. With ‘Plan B’ Yaya Toure off the pitch, could the title be slipping away from our grasp? (This is the first time I’ve ever broken down writing an article, struggling to see through tears as I type every word). But City continued to push forward to probe, seek and regain the lead. Moments of madness that epitomised Joey Barton resulted in the former City midfielder receiving a red card and causing all manner of chaos as he elbowed Carlos Tevez, kicked Aguero and attempted to head-butt Kompany. QPR now had 10 men, surely the Rangers’ captain had just made City’s job easier?


That was until the unthinkable. Jamie Mackie gave the visitors the lead. QPR were winning 2-1 with 24 minutes to go. It had to be a win. We needed to find two goals. The crowd was stunned into silence, heads dropped into hands. There was that feeling we thought we’d never feel again. It was typical City, whether you wanted to believe it or not. But the feeling I felt was the feeling I had at Wembley back in 1999 at the play-off final against Gillingham after Carl Asaba and Robert Taylor had scored. When we were 2-0 down and needed a draw to take it to extra time. There was no way I was going to let my head drop; I stood up and urged the crowd to get behind the team. It wasn’t impossible. If we could do it then we could certainly do it now, 13 years later.

But the fans around me stayed hushed, rocked into a disbelieving state of horror. I shouted and screamed my encouragement to the team, the gentleman in front of me told me to ‘give it a rest’. Resting wasn’t in my plans, not when we’d come so far and had the Premier League title at stake. The minutes ticked by, time was running out as City desperately searched for an equaliser. ‘Come on City’ I yelped. 85 minutes gone and somebody told our row of fans that Sunderland had equalised at the Stadium of Light. Everybody around me got to their feet and collectively hurled encouragement towards the warriors on the pitch. Just one goal, that’s what we thought we needed. One goal. Then somebody else said it was now 2-2 in Sunderland. 1-0, 1-1, 2-2... we had no idea what the real score was but the information revitalised the fans around me. Supporters were pleading the goal into the net, begging and crying.

The fourth official held the board up- five minutes. Hope. Belief. A corner and there it was! Substitute Edin Dzeko rose to head the equaliser in as the City team ran back to the centre spot. We went berserk but still knew that the draw may not be enough. Another goal would clinch it. Three minutes left to play and just one solitary goal would make Manchester City Champions. The tension was too much to bear. The encouragement and wails as Mario Balotelli pushed the ball through to Aguero. Aguero found space on the right- and the back of the net. Sergio Aguero had done it. City had done it. We had done it. I broke down into flood of tears and hugged my fiancé, Chris. He picked me up and swung me round like a rag doll as fans wept, crying tears of joy. With only seconds to play, City had turned a 2-1 deficit into a 3-2 advantage, bringing the title to the blue half of Manchester.

Referee Mike Dean blew the final whistle to make it official. It had been the most miraculous conclusion to not only a match, but the Premier League, ever. City crowned Barclays Premier League Champions after scoring two goals in extra time. From staring defeat and ultimate disappointment in the face to banishing the ‘typical City’ tag into the annals of history, along with the 44-year wait. QPR enjoyed the party too- they had survived after Bolton only managed to draw with Stoke. In fact QPR celebrated Aguero’s last-gasp winner with almost as much gusto as the home fans. The Etihad Stadium was hosting the most cataclysmic party the likes of which had almost been improbable mere minutes beforehand. Captain Fantastic Kompany lifted the trophy to an almighty roar from the emotionally-drained Blues.


The years of ridicule, of being poked fun at, laughed at, mocked and put down all because of being a City fan were vindicated. City had deserved it: beating the former Champions home and away, the latter in the most emphatic of styles and clocking up formidable victories with goal-heavy scores. Playing with flair and creativity, at times virtually unplayable, with consistent performances across the board from such talent it made it almost impossible to pick an individual player of the season. But noticeably playing with belief and as a team, demonstrating the desire and together spirit most media critics had thought impossible from ‘heartless mercenaries’. The doubters had been silenced; it was time to accept the changing of the guard, but not without putting fans through the most excruciating array of emotions. Champions of England, Manchester City Football Club.


Since Sunday I’ve been floating on cloud nine along with every other blue. I want this feeling to last forever; I never thought I’d see it in my lifetime. I’m not sure what to do with myself at the moment, the feeling of euphoria is such that I’ve barely ate, limiting myself to a champagne diet until the bubbles run dry. Where do we go from here? Life is the same but everything’s so different now. Champions of England. No matter how many times I say it out loud it still doesn’t feel real. It doesn’t. You can watch other teams win it every year but when it happens to the club you support, it’s difficult to put into words just what it means. It’s the world and so much more.


This summer will undoubtedly last forever. It will feel like an eternity before the Premier League returns. Perhaps by then I’ll have come to terms with the fact that I support the Champions. I’ve never felt more like singing the Blues.