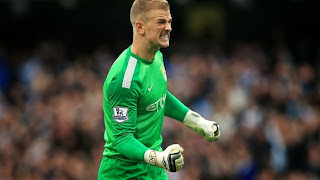 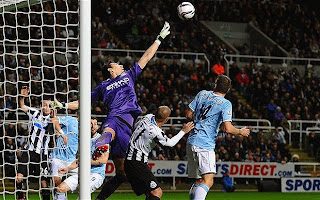 Pellegrini decided to stick with Pantilimon for the second game running, this time when City played Norwich at the Etihad Stadium. He was officially given the nod above Hart for his first start in the Premier League. Once again the press pack thrilled at the sight of the team sheet and predictably went into overdrive: ‘Hart Attack’, ‘Hart Failure’ and ‘Joe Dropped’ all original and witty takes on the so-called crisis. So it seemed ironic that City went on to win the match against the Canaries 7-0, with Pantilimon merely a spectator for the majority of the 90 minutes. 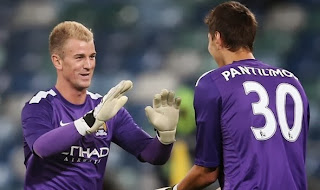 The Chilean made it a hat-trick of consecutive matches for Pantilimon when he named him in goal for the Champions League game against CSKA Moscow in Manchester. City won the game 5-2, the result meaning the team had qualified for the knockout stages of the competition. The Romanian had played three games and conceded two goals – all in front of the watchful eyes of Hart from the sidelines. 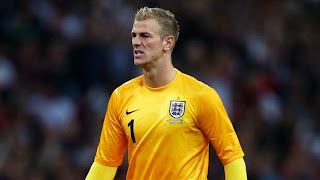 The point has now been made. The time out has served its purpose. No one player is immune from criticism, nor guaranteed their name on the team sheet before each and every game. Pellegrini has done the right thing by taking him out of the spotlight and away from the ferocious heat of the media to allow the storm to pass. I’m sure Hart has learned something from the experience and will grasp the opportunity to get back between the posts with both hands. England manager Roy Hodgson has also spoken publicly of his backing for the Shrewsbury-born stopper, remaining adamant that he is absolutely part of his plans in the run-up to the World Cup in Brazil next year.

'Sometimes as a club manager you get put under pressure to make a decision,’ Hodgson said. ‘But I'm not convinced in my own mind that he has written off Joe Hart in any way.

'Maybe he thought that withdrawing him from the firing line might be a good thing. He'll play for England. He'll be in the firing line there, as he was in the last two games we played.’

Footballers make mistakes. Missing an open goal, receiving a red card, scoring an own goal, giving away a penalty and mix-ups in communication happen every weekend in the sport. Being lambasted for errors comes with the territory, but the press pile on additional pressure, increasing the negativity and intensity surrounding the situation. Hart is one of the best goalkeepers England have produced for years and will continue to be. Pellegrini is a manager with pedigree and knows that this time out is for the greater good. City fans will back him to the hilt and he will receive a rapturous welcome back on his return to the starting line-up. 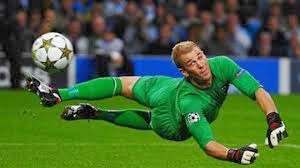 The media will wait with bated breath, pen poised, ready to rate or slate his comeback performance. Either way they’ll never be happy: if it’s not Hart being dropped, it’s City not fielding any English players. For Joe it’s about getting his head down: his motivation should be to do what he does best, his day job, and force the media into writing the kind of headlines they dread – positive ones. He’s an FA Cup and Premier League winner at the age of 26 with arguably his best years still to come. It’s time for him to slip back into the number one shirt, roll his sleeves up and have some encouragement and backing instead of trepidation and ridicule.

Joe needs to relax and get back to smiling. He is too rigid in his movements and therefore the ball bounces off him too much. He needs to focus on his judgement and control his area more.