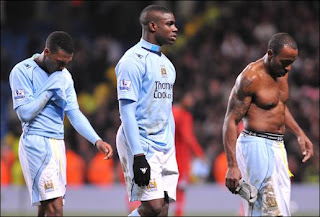 Happy New Year to all fellow blues out there! I hope you all enjoyed the festive period and the results that accompanied this time.

Well once again we hear ourselves saying ‘what the hell is going on?’ Knocked out of the F.A. Cup by Nottingham Forest. Nottingham Forest! I mean, no disrespect to Forest but it really should have been a comprehensive victory and an opportunity for build on the platform of festive results that we had already achieved. Instead, it was a disgusting, disgraceful ‘performance’ by individuals rather than a team. The only players that looked to be putting any effort in from where I was stood was Pablo Zabaleta, Vincent Kompany, Daniel Sturridge and Shaun Wright-Phillips until he went off.

But the defeat was shambolic and the players should be really ashamed of themselves. They get to wear the sky blue of Manchester City every week and they should know what City mean to their die-hard fans. There is no pride and no passion, no fight and no performance. Recently I have become accustomed to watching schoolboy-esque football from certain individuals whose heads have been over-inflated by their over-paid wage slips and I for one am sick of it. I could obviously pick out individual players and slate them but there was so many that it is just disheartening to say the least.

To be honest, I am really divided over my opinion on Mark Hughes. Part of me believes that he isn’t the right man for the job; he isn’t experienced enough and doesn’t have the pulling power we need to take the club in the right direction. It sounds bad, but I think the fact that he is seen and is known as a former United legend does portray him in a negative light, for me anyway. But part of me knows that we need stability at City after working our way through so many managers. The Welshman does need time and he does deserve it because he has the potential to be a superb manager.

If you think logically about the situation at City and having Hughes as manager, take the money out of it. Imagine if City were in the position they are in right now, but with no money to spend. Without Robinho. Would Hughes be there right now? Or is the money actually acting as a lifeline for him? Only time will tell if he can bring in the type of players that we need to progress from the precarious point we are at right now.
Playing Portsmouth at Fratton Park will be a tricky one. Our away form is abysmal and they aren’t in the best form at the moment. Having Wright-Phillips out with a hamstring injury is another punishing blow when we are trying to achieve results but seem incapable of grafting out points. I welcome Wayne Bridge to Eastlands- he immediately fills our problematic left-back issue and has the kind of calibre required to tighten us at the back. He reminds me a lot of Jamie Carragher and is somewhat of an under-rated character.

The results of last month’s poll are in. I asked who you would like to see being brought in at City in the transfer window. Brazilian star Kaka topped the poll with a convincing 58% of the vote. Liverpool striker Fernando Torres attracted 16% and Roque Santa Cruz and Luka Podolski clocked up 8%. New signing Wayne Bridge was an option, but nobody selected him as a vote. The new poll is open so get voting.

I am reprising my role as ‘Queen of the Blues’ on Key 103 Manchester radio on Sunday 11th January so tune in if you want to hear a bit of banter with me and the dirty United fan from Oxford. It’s on the MacDonald and Maguire show, every Sunday at 10:30pm. Keep buying King of the Kippax and checking out www.FootballFanCast.com for my latest work!