HEADLINE BLUES: TO BUY OR NOT TO BUY? 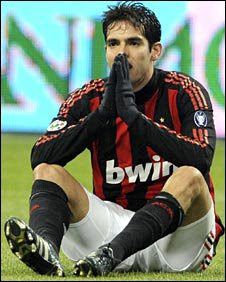 Right so this is my opinion on the Kaka situation at City. I am in no doubt of the calibre of player that Kaka is; he is a world-class individual who would bring his unique talent and skill to Eastlands. But at £100 million, it would be a transfer that would completely change football and one that many fans have been fearing could happen for some time.
I personally do not think that we need Kaka in our team; yes he would be a welcome addition to both City and the Premier League, but we have other problem areas that need fixing. We need a goalkeeper, defender and a striker. Yes we do need a midfielder, but somebody with grit and tenacity, somebody who can boss the engine room about and dictate play as a pose to yet another flair-ish Brazilian. The £100 million could be used on at least four other players that would strengthen City's team and possible bring that consistency that we crave to climb the table.
Bringing in a couple of magicians isn't going to produce spellbinding football when they are being slotted into a team with under-par footballers. Also, it won't necessarily save Mark Hughes' job either. In fact, I think it would make it worse for the Welshman...