ZAB A LOAD OF THAT! 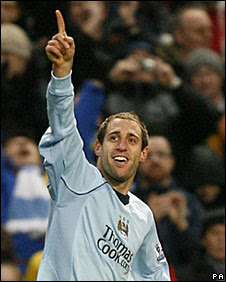 Dunne off as City clinch first victory of 2009
Richard Dunne received the eighth red card of his playing career as City claimed a much-needed 1-0 victory over their North West rivals Wigan Athletic.
Dunne saw red on 54 minutes for kicking out at Amir Zaki following a collision between the two. The red card had come just seconds after a strike from Pablo Zabaleta had given City the lead in a closely-fought match.
Wigan made every effort to find an equaliser, with goalkeeper Chris Kirkland venturing up for a corner in injury time, but it was to no avail.
Before the game, all talk had been surrounding Kaka's potential £100 million move to Eastlands, but Mark Hughes needed his 11 outfield men to do the talking for now- and that is exactly what he got. The first half was littered with chances for City, with Brazilians Elano and Robinho linking up well and going close to breaking the deadlock.
Robinho came closest on 21 minutes but his volley was blocked on the line by Titus Bramble. In an audacious move, Zabaleta had been moved from right back to central midfield- and proved to be a revelation. He provided the grit and determination that had been lacking from previous performances, dominating the midfield and linking up well with City's creative options.
Wigan's attacking opportunities were limited to a couple of long-range efforts as City's defence looked to be more convincing and buoyant of late, with Wilson Palacios registering the Latics only chances of the first half.
The game was crying out for a goal and it came on 53 minutes. Daniel Sturridge did well to overcome the Wigan defence and his cross fell to Zabaleta, whose swerving shot flew past Paul Scharner. City were deserved of their lead, but only a minute later Dunne received his marching orders from referee Lee Mason following a collision with Zaki. The Republic of Ireland defender's reaction was hot-headed and immature to say the least and Hughes looked frustrated to see his team, having just taken the lead, reduced to 10 men for the third time at home this season.
This was the cue for Wigan to attack relentlessly, with City battling against a succession of corners for the visitors. Their best chance fell to Zaki, who headed over the bar from just six yards out. With time running out, Kirkland ventured forward to add another option but his efforts were unsuccessful and nearly led to City doubling their lead.
The result was deserved for Mark Hughes' men, whose performance was battling and encouraging. Man-of-the-match Zabaleta was outstanding and defender Nedum Onuoha put in a mature and resilient performance in defence. Elano looked more committed and is clearly relishing playing with his fellow countryman, Robinho. With Newcastle United at home next, it remains to be seen if Kaka will sign on the dotted line and feature among the line up...