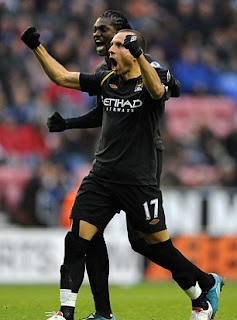 Don’t you just hate international breaks? I miss Premier League action so much, you just cannot beat going to the game on a Saturday (albeit Sunday kick-offs are tending to dominate the fixture list) and watching Match of the Day to check out the opposition. But no, international breaks deny us that privilege and tend to come with baggage. Baggage meaning injuries.
Point better than none
But the break ended last weekend and it was back to business with City visiting the DW Stadium, formerly known as the JJB. Tricky game considering Wigan’s form sheet defines inconsistency. A cold 90 minutes and disappointing home crowd watched City go back to Eastlands with a point. A 1-1 draw in the circumstances was a decent result, given the fact that the influential Craig Bellamy and reliable Kolo Toure were both out injured.
Wigan battled and attacked with vigour and perhaps if this would have been last season City would have suffered a defeat. But key additions to the squad proved their worth, notably Carlos Tevez, Gareth Barry and Martin Petrov. Tevez ran himself into the ground and created Petrov’s equaliser, which in turn deserves applause. The team spirit at City at the moment is commendable and even when Pablo Zabaleta saw red there were chances for either team to steal the three points. A draw, in my opinion, was fair.
Life’s a beach for Rafa
The controversy of the weekend seemed to be the ‘beach-ball’ goal at the Stadium of Light. If you have been living on Mars, allow me to explain: Sunderland played Liverpool at the Stadium of Light, young Liverpool fan threw a beach-ball onto the pitch and Darren Bent scored the only goal of the game when the football deflected into the net off said beach ball. Well, City fans have all felt that ironic deflating feeling of being on the end of a defeat that was aided by an inflated device (Sheffield United in the Cup, anybody?) so I have zero sympathy for Liverpool fans. Sorry Rafa, deal with it and move on. The fact is, your team had 89 other minutes during the game to get something out of it, the blame cannot lie solely on the beach-ball.
Premier picks
Premier League football never fails to disappoint and this season has been no exception so far. Burnley have proved to be a surprise package, turning into ‘this years’ Stoke’ with an impeccable home record. The signing of David Nugent could prove to be a big coup for Owen Coyle: Turf Moor is a tricky enough place to go at the best of times as Alex Ferguson discovered. Despite City’s good record against Burnley, I will still be apprehensive when it comes to visiting East Lancashire next year.
Sunderland are another team that I have high praise for. Steve Bruce has made a habit of managing teams with a more than respectable budget and impressing- and Sunderland are no exception. I like the fact that they have Niall Quinn at the helm- a sensible chairman with great football experience and knowledge with the club’s best interests at heart (yes I’m looking at you, Carsen Yeung). Bruce is stubborn and determined and reigniting Darren Bent’s career by moving him up north has proved a masterstroke- Bent’s in the form of his life and thriving at the Black Cats in amongst a well-balanced and tricky team.
Blue Tuesday news
If you aren’t familiar with the show, Blue Tuesday is an hour-long City-based show on 95.1FM BBC Radio Manchester. It’s presented by Ian Cheeseman and Paul Lake and I feature as the ‘interaction queen’, checking all the City forums, blogs and so on and reading out texts and emails. It sounds an easy gig, but Paul and I put a lot of effort into producing quality contacts for interviews, getting studio guests on and writing great content. I’m having a great time with it and I hope you are enjoying it.
We’ve had some great guests on: the likes of Uwe Rosler, Shaun Goater, Peter Reid, Danny Tiatto, Neil McNab, half of the 1989 5-1 team...we’re always working on going bigger and better and have some amazing ideas and things lined up for the future, so tune in to find out more. Become a fan of the show on Facebook by logging in and searching Blue Tuesday or ‘tweet’ us via.
www.twitter.com/BBCBlueTuesday.
This weekend
City face Fulham on Sunday at Eastlands. I watched Fulham in the Europa Cup last night against Roma and I thought they were quite unlucky with the full-time 1-1 draw. They have beaten City for the past couple of seasons at home so I am more than apprehensive. It took extra time for the Blues to beat them 2-1 in the Carling Cup last month and I’m expecting more of the same come Sunday- Zolten Gera’s wonder strike is still very fresh in my mind. But City have got to keep up with the pace and I view Tottenham Hotspur as our major rivals for breaking into the Top Four. Aston Villa and Everton are good, but I don’t think they have the strength in depth and tools required to penetrate the status quo. Only time will tell if City, or Spurs for that matter, do.
Emily