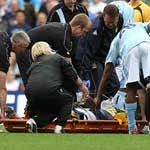 It has been confirmed that Micah Richards has been released from hospital after the dramatic injury he sustained on the pitch today during the team’s 3-0 victory over West Ham. Richards was unconscious for eight minutes on the pitch before being stretchered off and rushed to hospital following a clash of heads with team-mate Tal Ben Haim. It is yet to be confirmed whether he will participate in City’s next game against FC Midtjylland.