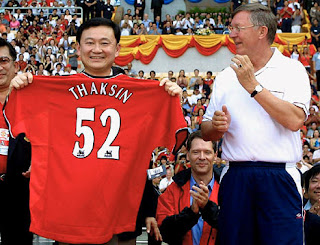 Since Thaksin Shinawatra became Manchester City’s chairman after a controversial takeover, life at Eastlands (for a change) has never been dull. Having come through the whole Sven saga and seeing his wife sent to prison for a three year stint, the rumour mill has well and truly been churning again this week with whispers that Shinawatra is either looking to sell or looking for investors to plough money into the club.

Shinawatra’s money ‘is still frozen and tied up’; Football365.com reports that Shinawatra was borrowing money off ex-City chairman John Wardle just to fund the player’s wages. His lack of access to money could also explain why the mega money war-chest promised to Hughes on his arrival at Eastlands has never really materialised.

So what will happen at Eastlands? Skysports.com are reporting that Hughes has demanded showdown talks with City execs over his lack of funds…could the season implode for the blues before it’s already begun?