A Bridge Too Far For Love Tyrant Terry 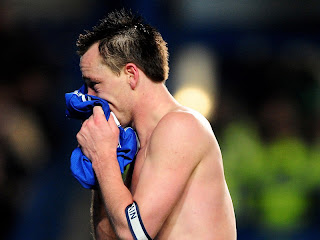 When you hear the name John Terry what do you think of? His tears after he missed a crucial spot-kick for Chelsea during the Champions League final two seasons ago in Moscow? His jovial celebrations, sporting a jester hat when Chelsea won the Carling Cup? Or does the mention of his name just remind you of the cheeky blue-eyed Londoner himself: the man with the passion, work-rate and desire that epitomizes his English Lion-heart stance?
Well, that’s probably covered what you used to think about him. Now, because of his alleged multiple frivolities, Terry’s name will forever be synonymous with sex scandal and betrayal. If the original crime committed wasn’t deemed so bad, the alleged details surfacing are proving to be both shameful and disgusting. The captain of the England national team, hero to millions, alleged to be having an affair with his fellow countryman Wayne Bridge’s on/off girlfriend. The so-called reformed bad boy, who had claimed publicly to have put his wild and cheating ways strictly behind him. He lied.
This man is captain of both England and his boyhood team, Chelsea. He is supposed to and expected to be the ultimate role model for children and grown adults alike. But instead of conducting his business in a respectful and admirable way, he betrayed both his wife’s trust and his team-mates. Terry plays in the Premier League, in a country where the media throng resemble a baying pack of wolves desperate to sink their fangs into a witless victim. The media are capable of making and breaking people and, after 29 years of living here, Terry should have been fully aware of this. With 2010 being the year of the World Cup, this is the last thing that Fabio Capello would have wanted from a man that is supposed to offer his country hope and glory.
There can be little doubt that on the pitch he is a born leader. It is him and his best friend Frank Lampard that provide the spine to Chelsea and England. His football should do the talking, but it will ultimately be the press and public outcry that determines Terry’s fate as both England captain and footballer. The England team is already littered with players that are tainted in controversy: Wayne Rooney, Ashley Cole, Rio Ferdinand, Steven Gerrard and even David Beckham to name a few. However none of them have ever betrayed a team-mate- and had to share the same dressing room post-apocalypse.
The moral thing to do for Terry would be to issue a public, sincere apology and to relinquish his England captaincy. To strike now before the media firestorm burns out of control and to substitute a stubborn and foolhardy approach for one of regret and contemplation. His alleged naivety, greed and treachery have caused other people monumental heartache- as a husband and father, having committed multiple adulterous sins, why should he be allowed to keep getting away with it?
The trouble is that modern-day footballers are spoilt rotten. Terry can have his pick of anything in the world. Nothing is deemed too extravagant for the player that Manchester City were willing to pay any amount for and that Chelsea compromised their already-generous wage structure to keep on their books. This time, opting to allegedly commit the most cheap and disrespectful act by having an affair with his wife’s friend and team-mates girlfriend, Terry must be made to pay the price and face the music.