Is Rafa too reluctant to read the riot act? 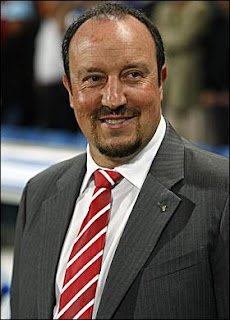 Most football managers tend to have their own unique style that individualises them from the rest. Alex Ferguson is known for his ‘hairdryer’ treatment when things aren’t going according to plan. Roberto Mancini seems to be the personification of cool, calm and collected and Jose Mourinho is renowned for his designer coats worn with an arrogant swagger.
So what is it with Rafa Benitez? The Liverpool manager comes across as being a pleasant, mild-mannered individual. Is he too sensitive? Is he capable of unleashing his inner ‘hairdryer’ or is it that his calm demeanour represents his man-management in the dressing room? Is he too soft as a manager?
When Liverpool won the highest prize in European football, the Champions League, in May 2005, many players admitted that it was their managers composed half-time team-talk that motivated their astonishing comeback. Losing at the break 3-0 to AC Milan and facing final heartache in the face, the likes of Sam Allardyce, Harry Redknapp or Martin O’Neill would have been tempted to read the riot act. But Benitez offered calm words of encouragement- and his side went on to pull off an incredible Houdini act, levelling the tie 3-3 then winning the game 3-2 on penalties. Whatever Rafa said worked.
But the Spaniard’s cool temperament has been tested on several occasions. His war of words with Ferguson, where Benitez accused referees of being lenient on the Manchester United manager, prompted fans to chant about him ‘cracking up’. He also had a frosty relationship with Mourinho, after allegedly implying several times that it had been Roman Abramovich’s money that had brought Chelsea’s silverware to Stamford Bridge rather than Mourinho’s managerial skills. When two of his own players, Craig Bellamy and John Arne Riise came to blows just days before Liverpool’s crucial Champions League game at Barcelona, Benitez was furious and fined both of the unruly players.
Another issue pushing Rafa’s patience has proved to be the relationship between him and the club’s American owners, George Gillett Jr and Tom Hicks. Ongoing conflict regarding transfer funds and targets have resulted in Liverpool fans voicing their public support for the manager and voicing mass discontent towards the owners and concerns for the club’s future and available finances. When Rafa signed a new five-year deal in March 2009 he thanked the fans, saying: “With supporters like this I could never say no to staying.”
His relatively kind and almost shy manner should work in his favour- but doesn’t always. Football fans like to see personalities like Stuart ‘Psycho’ Pearce and Barry Fry bounding up and down the touch-line frenetically. Rafa’s sensitivity could be misconstrued by fans and critics alike to be a lack of passion or inability to motivate his players.
But you only need to look at his record at Anfield to be reassured: before heading out of the Champions League this season, Benitez broke both Bill Shankly and Bob Paisley’s European records of number of European matches in charge and European wins respectively. As well as winning the Champions League, Rafa’s also won the F.A. Cup, UEFA Super Cup and F.A. Community Shield. However, the prize of Premier League champions continues to elude him.
Critics scoff that Benitez’s continental style and European success (he won La Liga twice and the UEFA Cup with Spanish side Valencia) is proving to be his Achilles heel in England. One thing is for sure- don’t be fooled by the supposed serenity Rafa exudes. His passion and desire for success in football remains unrelenting- the Matador of Merseyside continues to march on.