Children of The Blue Revolution

CHILDREN OF THE BLUE REVOLUTION

Some might say we found a brighter day, but the kids of today should be aware of City's revolutionary road 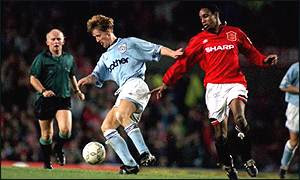 There was a point when the 30th May 1999 was the best day of my life. To gain perspective, it still is.

As a City fan of many years, I’ve experienced my fair share of ups and downs. Going into school and being teased for supporting the ‘wrong’ side of Manchester became a daily occurrence. Once the lads had seen my City coat, emblazoned with the now-‘retro’ round club badge, that was it. That must be hard for children to believe right now.

The worst day was probably Friday 11th November 1994; the evening before City had been crushed by the neighbours Manchester United 5-0 with Andrei Kanchelskis scoring a hat-trick. I still wore my trusty coat with pride and a baying mob greeted me in my form room for reception. ‘Shitty City,’ they collectively screamed, laughing and joking. They just wouldn’t let it drop. I put up with five years of delirious gloating from the army of glory fans at school, all fans of United and Liverpool, and none of them missed an opportunity to rub our poor form and vast difference in quality in. 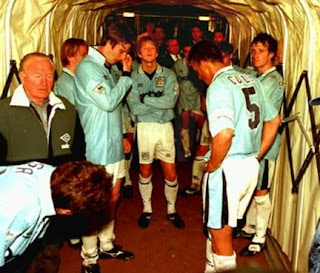 They took immense pleasure in mocking me, but it only stood to make me prouder, stronger and even more fiercely loyal. Don’t get me wrong, part of me loved the banter, but it hurt to be crushed week in week out. By the time I’d gone to college City were in Division Two, and the sight of me sporting my on-trend Kappa-sponsored laser blue shirt brought a sea of sniggers to the refectory at lunchtime (the fluorescent striped one worked to the same effect). I’d increase the banter levels by wearing shirts from the opposition that United would be facing in the Champions League: Juventus, AC Milan and Inter Milan were ones I’d waltz in wearing with a tongue-in-cheek smirk, particularly after any of them had managed to beat the Reds. 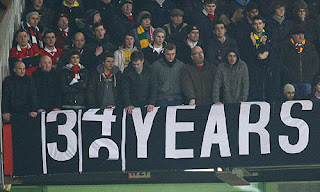 I’d never experienced any real competitive rivalry with United fans simply because of the gulf in class between the two clubs at the time. When I came into college wearing my shirt with pride after City had beat Gillingham at Wembley in May 1999 to gain promotion to Division One, I was yet again met with absurd looks from United fans who had just witnessed their team winning the treble. They had just seen their side beat Bayern Munich in the Champions League Final 2-1 and here was me thrilled to bits at ‘little’ City’s promotion from the then-third tier of English football. They were more interested in Leeds and Liverpool as rivals- we were seen as an irrelevant laughing stock. 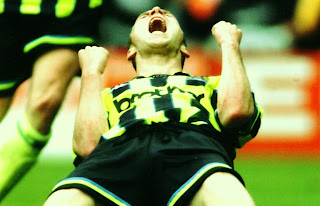 Fast forward 13 years and here we are now in November 2011. The world is a much more different place: events since 1999 include 9/11, 7/7, the deaths of Saddam Hussein, Osama Bin Laden and Colonel Gaddafi. The world is in the grip of recession, Sir Richard Branson is set to launch flights to space in two years and London hosts the Olympics in little over six months. Woolworths has become extinct and America is ruled by President Obama. Prince William is married. I’ve gone from a 17 year-old college student dreaming of writing about her football team to shop assistant to university student to a 29 year-old who is writing about her football team for them.

More importantly, City have gone through more reinventions than Madonna. From Joe Royle to Kevin Keegan to Stuart Pearce to Mark Hughes and Roberto Mancini, the 2008 takeover has put City’s progress on fast forward. An Italian manager, an Argentinean striker and an FA Cup later, pinch yourself but we currently sit at the top of the Premier League. At the time of writing, we are five points clear of our rivals United after beating them 6-1 at Old Trafford and remain unbeaten in the League so far this season. I never thought I’d type those words and have them be actual fact. City fans really don’t know what will happen over the course of the season. I always think back to Kevin Keegan when he was manager at Newcastle United and use that as an air of caution: you can never write United off. The moment you write them off is the moment they come along and storm to the top spot. 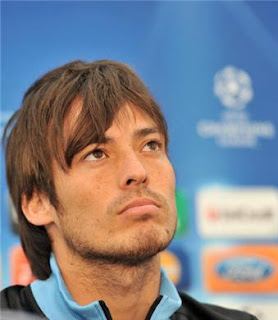 It’s been a really surreal year. To be honest I’ve just floated my way through the past 11 months in a haze of euphoria and disbelief. I went to the FA Cup semi final against United and that was a complete blur and the final against Stoke City went by like it was a dream. I woke up the next day to drive back to Manchester and I had to buy every single newspaper just to check that it actually happened, despite the fact I’d been in Wembley and seen my team lift the trophy. We then went onto secure automatic Champions League qualification and have since heard the famous Champions League opera music in our stadium. Things just keep getting better and better and there seems no sign of it letting up. 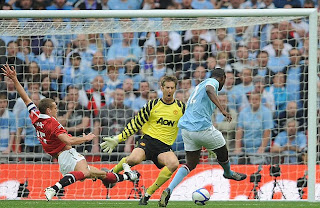 I’m far from cocky about City’s recent run of form. In fact it’s quite a humbling experience. I’ve dreamed of what I’ve experienced the past year with City for years. I never thought I’d live to see the day. I became accustomed to supporting a yo-yo side; being poked fun at because of my football allegiance became the norm. To a certain extent I still am. People talk about having lived in the shadows of other team’s success, but I’ve never seen it like that. I’ve never been bitter, I’ve just always been along for the ride in the hope that someday my patience and loyalty may happen to pay off. Most teams experience ups and downs, it just seems that City have encountered them much more regularly. 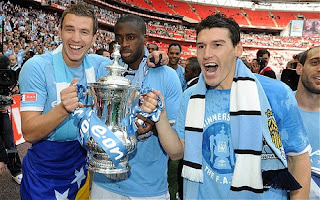 I’m refusing to get carried away with the Blues. I’m incredibly excited at the thought of ‘what may be’ one day, but for now I’m just embracing the ride and seeing what’s around the corner. Life is never dull in the blue half of Manchester- it is always eventful. I haven’t got a crystal ball so I don’t know what will happen come May but one thing’s for sure, the next six months are going to be colossal. Unlike other people, I haven’t set a bar for achievements and I don’t have any expectations. I’m keeping a very open mind- what will be, will be. It’s strange to think that some children will only ever know the Manchester City that we know now. They’ll never know the Bell, Lee and Summerbee era but they’ll also never know the Creaney, Pollock and Bradbury days. The Goater, Weaver and Morrison days. In some ways that’s what I’m thankful for, although at the time it’s all I ever knew and all I ever loved. 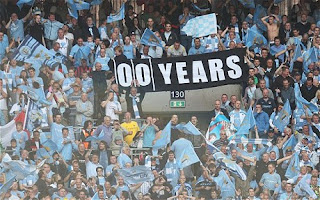 There was a point when the 30th May 1999 was the best day of my life. To gain perspective it still is- followed closely by 14th May 2011. I’ll never forget the past, but I’m always embracing the future. The so-called ‘Sky Four’ became predictable, stagnant, boring. It’s the dawn of a new era in Premier League football- and it’s City who are illuminating the Sky at the moment.

What a lovely read - so similar to my own enjoyment of the highs and lows of this roller coaster ride we call City :)
X

Expertly summed up, Emily! I've got an open mind, too, and I'm trying to keep a big enough space in it!