FEEDING THE GOAT ACROSS THE CITY 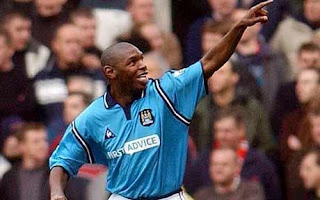 'One Moment In Time'

'One Moment In Time' is a nostalgic look back at events and occasions in City's past that will no doubt resurrect many impassioned memories for most City fans. Written from my personal point of view, I am hoping that reliving these moments, whether they were good or bad, will prove to be an enjoyable read for all. This month...a visit to Old Trafford under the guidance of Kevin Keegan.

Our bounce back to the Premier League was showing City to be a lot more than just a mediocre team. Results were consistent and we hovered mid-table for the duration of the season. Undoubtedly, our best result had been against our Derby team, United, and we all hoped for a repeat of this success when we booked our tickets for the clash at Old Trafford.

Simon, Spenny and I were all really psyched up for the showdown. Obviously we thought that the game could swing one of two ways: Fergie would view it as a perfect opportunity for revenge and it could end up a mauling, or City could seize the chance of taking the maximum six points off the former treble-winners. Either way it would be a cracker.

Personally I cannot stand Old Trafford. It’s more of a tourist attraction than a football stadium, with Japanese tourists pointing their Nikon cameras in every direction and residents from down south travelling four hours to make up the majority of the numbers. All the oohing and ahhing outside and inside the ground makes me sick- that isn’t what football is about. Football is about supporting your local team- not just saying that you support them because of the glory.

As always, the travelling City contingency provided the majority of the noise. With it being a Derby, the atmosphere was intensified, even more so when City fuelled the fire by singing Blue Moon over their ‘Flowers of Manchester’ song (a song sung in memory to the victims of the 1958 Munich aeroplane disaster).

Spenny had smuggled himself in, minus a ticket, and was stood up throughout the game at the back of the stand. Our mate Andy Tolley worked on the United turnstiles and had let him pass through for free. But Simon and I were sat right next to the home fans, with only a small metal fence to separate us. The jibes between both sets of fans were relentless- and erupted when Ruud Van Nistelrooy netted to break the deadlock.

Oh no. The forecast of revenge looked set to be the correct prediction. Van Nistelrooy was celebrating like he had won a cup and the home fans next to us bombarded us with their goading and boasting. I didn’t even look at them though; I simply raised my fingers to indicate our previous score-line against them. My heart sunk though- City had to dig deep to fight for a result.

Fight they did. United pressed on more to attempt to consolidate their lead, piling on the pressure in the hope that City’s back-line would buckle. But it didn’t. Then- the masterstroke. Activity on the bench. With City’s manager Kevin Keegan sensing the possibility of a late equaliser, Shaun ‘goal machine’ Goater was brought on to penetrate the Reds defence, along with Ali Benarbia. Straight away the Blues won a free-kick; Benarbia’s first touch sent the ball into the area- and onto Goater’s head.

The net bulged- we had the equaliser. Within nine seconds of being on the pitch, Goater had brought City level and sent the travelling army of blues into a frenzy. Not it was our turn to taunt the somewhat solemn home fans. After a manic two minutes of jumping around, thousands of City fans raised their arms and sung Blue Moon to a crestfallen Old Trafford. But it wasn’t over just yet.

As we celebrated our potential point, Nicolas Anelka threaded the ball through to Goater, who did what he does best- he scored! My heart missed five beats and just as I began to scream with joy, I was promptly brought back down to earth. The goal had been disallowed, apparently due to handball by Anelka. Three points would have been incredible, but a point was still good for me. There had been absolutely no shame in how we performed, with Carlo Nash being a late replacement for Peter Schmeichel due to a calf injury.

Referee Alan Wiley’s whistle was met with a wall of noise from us- and boos from Fergie’s fans. We had pulled off a result yet again. Being in a Derby atmosphere is a unique experience- it makes the hairs on the back of your neck stand on end. Your heart beats faster constantly and the 90 minutes are spent either perched on the edge of your seat or stood up shouting and singing. Proving your loyalty. Engaging in the banter that can only happen between two teams fuelled with so much bitter rivalry. Where a result divides not only a city but work colleagues, family, friends and even partners.

That Sunday afternoon, City had won the battle but not the war. Sergeant Keegan had marshalled his troops to securing a point- of course he loved it, just loved it.