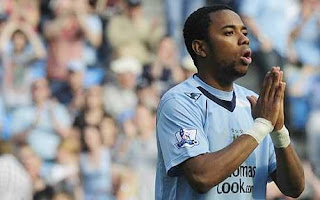 Here we go. It’s been a relatively quiet week City-news wise, what with the internationals and all, but it looks like the rumour mill is starting to churn and speculate on the future of City’s first takeover megastar signing, Robinho.

The 25 year-old is currently recovering from injury, but during his time on the sidelines Craig Bellamy has excelled and is in undroppable form at the moment, raising question marks over whether Robinho would be content to warm the bench while other in-form players remain so vital to City’s cause.

It now seems that Robinho is doing his best to catch Pep Guardiola’s attention over at the Nou Camp.

“They’re a great team. I played against them and know their quality. But right now I can only do it on the Playstation.

“Of course I would like to play for Barca. Who would not? We could have so much fun. It would be a pleasure to play alongside (Lionel) Messi, my compatriot Dani Alves, Xavi, (Andres) Iniesta, (Zlatan) Ibrahimovic, with all of them.

"They're a great team. I played against them and know their quality. But right now I can only do it on the PlayStation.

"It is a pleasure to watch Barca play. They look like the best Brazilian team with the way that they use the ball. Pep Guardiola's team is truly spectacular."

Robinho’s £32.5 million move from Real Madrid back in September 2008 set the precedent for other big-name signings to follow suit but speculation has always clouded his career at City. Cynics sneered from the beginning that he was only at Eastlands for the £160,000 a week and that he would only ever put in a performance at that ground.

The transfer window nearly always delivers controversy in some form and January 2010 looks set to be no exception. But would Robinho go?

“It is a question of sitting down and talking when there is a serious and concrete proposal and as I have said before I have not personally received that.

“Now would not be the right time to say things that could be badly interpreted here or there.

"I have a contract with City and being the professional that I am, I am dedicated to them."

By being so outspoken, people are already reading between the not-so-suttle lines of Robinho’s quotes. Surely if he was the consumate professional he would just keep quiet and let his football do the talking.