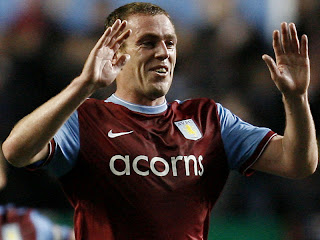 City’s visit to Villa Park should have been all about measuring just how far the club has come to breaking into the Top Four outright against a steely and often resilient Aston Villa led by the irrepressible Martin O’Neill. Instead, it was a battle of wits and proving a point for both Richard Dunne and Gareth Barry, the two former captains who were both facing their old teams for the first time since their much-debated transfers.

The contrast couldn’t have been more diverse: Dunne was greeted with a heroes reception from the thankful travelling City fans who recognized and acknowledged his contribution to the Manchester club throughout his dedicated career. It came with no great surprise that Barry’s welcome back to Villa Park was far more hostile, with the 28 year-old being subjected to constant torrents of abuse and money-waving, with his summer move to City still having left a sour taste in many Villa fans’ mouths.

But it was Dunne who had the last laugh: the Republic of Ireland defender out-jumped, ironically, Barry to head Villa into an early lead before in-form Craig Bellamy netted his eighth goal in 13 appearances for City to equalize and grab a point for Mark Hughes in a tight and vigorous encounter. Dunne played a blinder for the 90 minutes and was superb at the heart of the Villa defence, with Barry putting in a nervous and somewhat mediocre performance in City’s midfield.

Villa were quick to close City down, preventing any free-flowing moves with constant waves of determined blocks, stopping City from countering in their usual menacing style. The home side broke the deadlock when Dunne climbed above Barry to head home an inswinging corner from Stephen Warnock, followed respectfully with an understated and muted celebration. The home team limited City’s attacking options but Brad Friedel was forced to tip over a header from Emmanuel Adebayor on the stroke of half time.

After the break Hughes introduced Stephen Ireland who made a significant difference, offering a fresh option to the City attack. But it was Dunne who nearly extended Villa’s lead but his header from a James Milner corner went just wide of the post. City continued to pile on the pressure with a succession of corners and the equalizer seemed inevitable. Ireland and Adebayor combined to set up Bellamy who blasted the ball into the net to level the tie. It was the very least that City had deserved after a spell of dominant possession.

Mark Hughes headed back to Manchester with a point and plenty to think about. City fought well but were once again questionable when defending set pieces and looked unbalanced, with Bellamy thriving on the left but Shaun Wright-Phillips struggling to beat men on the right. But Villa proved tricky opponents and a point in the circumstances was well warranted. After the international break, City face an unpredictable trip to the DW Stadium to face a somewhat ‘Jekyll and Hyde’ Wigan Athletic side. Which team will perform for Roberto Martinez: the team that beat Chelsea 3-1 or lost to United 5-0 at home?