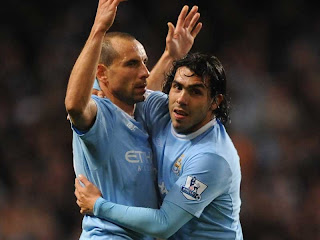 It was cool, it was calm and it was definitely collected. I could be talking about Carlos Tevez’s first goal celebration or City’s overall performance during the 90 minutes. But surely the time is now to take the Eastlands outfit seriously after the sides’ comprehensive 3-1 victory against West Ham.
In fact it was far easier than perhaps had been forecast. Mark Hughes’ blues were looking to bounce straight back from their heartbreaking last-gasp Derby day defeat, Gianfranco Zola’s Hammers looking for only their second Premier League victory this season. City striker Tevez was facing a former team for the second league game in a row- and return to haunt them he most definitely did with a brace, sandwiched around a classy free kick from Martin Petrov.
The 3-1 score-line didn’t reflect City’s dominance throughout the 90 minutes. Tevez’s first goal, set up well by Petrov, was met by the Argentinian apologising to the travelling West Ham fans who had been so grateful of his goals that had saved them from relegation. That goal should have proved to be the precedent for City to move on and storm the match, but Carlton Cole had different ideas. A ball through from Radoslav Kovac set Cole up for a simple equaliser. The Irons then had a chance to take the lead but Scott Parker’s goal was disallowed after the referee had blown for a foul by Cole on Joleon Lescott.
It was all City from that moment on. A foul on the in-form Nigel De Jong gave Petrov a chance to find the net- an opportunity that proved too tempting to resist. The Bulgarian, disheartened at a lack of first-team football, seemed to channel his frustration and anger through his shot and drilled the ball low to give City the lead. He ran straight over to the dug-out and pointed vigorously at the back of his shirt. Point made.
Tevez, Lescott and Bellamy all had chances to extend the lead and it was Tevez who scored City’s third on the hour mark with a simple header. The one-way traffic continued with Gareth Barry and Petrov enjoying shooting practise. With 15 minutes to go, Hughes introduced Roque Santa Cruz to the City faithful for his debut. Michael Johnson, another graduate of City’s youth academy, was also brought on as a substitute as the minutes ticked away.
Although West Ham aren’t a club that are at a level that City see themselves competing at, it was a sublimely confident and assured performance by the Eastlands club. With Emmanuel Adebayor coming back from his suspension and Santa Cruz gaining match fitness, the current top four have every reason to be wary and afraid. The new-look City are shaking up the status quo and bringing a different dimension to the somewhat stale and predictable order of the Premier League. Next up is another test and one that should provide a more realistic challenge- Aston Villa away.