JAKE HUMPHREY EXCLUSIVE INTERVIEW
‘I travelled 375 miles, from the TV studio to the terraces, to watch 45 minutes of football’ 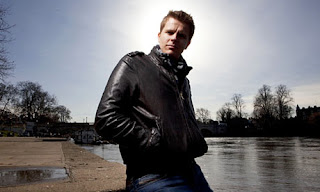 It’s the opening weekend of the 2009 Formula One Championship and the exclusive coverage of the sport has returned to the BBC. Jake is anchoring the coverage alongside the likes of Eddie Jordan and David Coulthard. Is he excited? I think so.

“I'm a huge Formula One fan. I've watched it for years and I think it's the most fascinating sport. What I love about it is that it's not just a guy driving a fast car, there's loads of tactics involved, strategies for the races and stuff.

It’s fair to say that Jake has had a varied and colourful career so far. After suffering an academic slump in his A-Levels, a period of work experience at Rapture TV led Jake into unexpectedly becoming a television presenter.

Since his break, Jake moved to the BBC and made his name as a kids’ presenter, fronting Fame Academy, The Saturday Show and Newsround.

“I grew up watching Zoe Ball and Jamie Theakston on Live and Kicking and it was an absolute dream of mine to do Saturday morning kids’ television,” Jake says passionately. “Live television is incredibly nerve-wracking but I’ve always felt really at home in a television studio. “

“I liken being a presenter to being a swan; if you watch a swan going across a river it looks very graceful and just glides along. But if you look under the water its feet are going mad to keep it moving. It’s like that with presenting; part of the skill is to make it look easy.”

After a while, Jake decided to enquire about making the transition from children’s to sports presenting. Having become a recognised face on the BBC, Jake found that in order to become a sports presenter he would have to prove himself.

“I went to BBC Sport and told them that I wanted to do sport in the long term. I told them that I would do whatever it took to prove that I was capable of being a sports journalist. So I got an ISDN kit and travelled to League One and Two games and did basic reports for those games.

“It paid hardly anything, I’d drive to the middle of nowhere and I might do a five second report in the second half then I’d drive home. But it was that groundwork that was really important to prove to the people at BBC Sport that I didn’t just want to come here and be famous. I wanted to be a sports journalist. That’s when the opportunities came up. I’ve been very lucky."

Since joining BBC Sport, Jake has become the youngest-ever presenter to host the hat-trick of programmes Football Focus, Match of the Day and Final Score. In 2008 he presented at the Superbowl, Sports Personality of the Year, the Olympics and the European Championships. It would be easy to think that Jake would be getting carried away, but the secret to his success is to stay grounded.

“When you are at BBC Television Centre and working, this is just a job,” Jake confesses. “It’s just like being at work. It’s not glamorous; I still jump on the tube and come into work, sit in the office and write scripts.

“If the phone rings I’ll pick it up and say ‘hello BBC Sport’. The trick is to have a nice home life, stay grounded and to just remind yourself that you are just doing a job.” 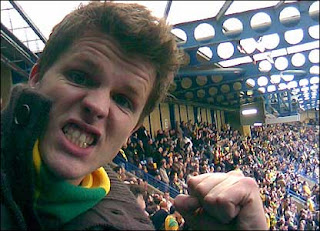 Away from the cameras, Jake is a self-confessed football fanatic and supports Championship side Norwich City. He remembers the Canaries’ glory days and the team’s ventures in Europe in the early nineties fuelled Jake’s love for the game.

“Jeremy Goss’ fantastic goals ignited my love affair with Norwich,” laughs Jake. “It’s still strange that I see Motty (John Motson, BBC commentator) around and I think that’s the man who commentated on my greatest night of football ever- when Norwich beat Bayern Munich at the Olympic Stadium. I suppose at 10 years old I must have thought it was brilliant, it’s only when you get a bit older that you realise it’s not always as good as that.”

A downside to Jake’s career is that he doesn’t get to watch Norwich at Carrow Road as often as he would like to, although every now and again he makes a considerable effort to get there.

“When it was Iwan Roberts’ last ever appearance I was in Glasgow filming The Saturday Show.

“I came off air at 11am in Glasgow, got a flight to London, jumped into my car at the airport and drove all the way to Norwich. I got there for the start of the second half, so I saw Roberts’ last 45 minutes as a Norwich City player. It was well worth doing; the guy’s an absolute legend and he’s a hero of mine.

“But it’s a lovely little family-run club. I love going down to Carrow Road and watching games, it’s fantastic. It’s nice to get back among my fellow Norwich fans when I can.”

Although Jake is aware that to compete in the elite in football a club needs to have significant financial backing, he remains realistic when looking at the Canaries’ future.

“Norwich have about 20,000 season ticket holders but have got no money,” Jake states. “For a long time football has been running in an unsustainable way. I think the sport needs to re-aline itself, although I don’t know in the short-term what the answer is. We are very lucky that Delia Smith and Martin Wynn-Jones, her husband, are really loving and committed fans who think the club are fantastic.

“I think that we’re in safe hands, but it’s a really tricky predicament. Do you risk the club going into administration by buying expensive players who might get you into the Premier League? Somebody has to be the person to stump up the cash and the only way to do that is to try and find a rich person to come and back us. It’s scary.”

Back to his career and Jake is quick to recognise the figures that have helped him to the position that he is now at in his illustrious career.

“There are quite a few people that have been sources of inspiration. Just at BBC Sport alone, the first guy that asked me to do Football Focus was the editor, Steve Bolton. The first guy to give me a chance at BBC Sport was Lance Hardy, and then Niall Sloane, who is the head of Formula One and Football, he took me to the Euros and offered me Formula One. Dave Gordon, who's the head of the Olympics, asked me to go to the Olympics.

“My all-time favourite presenters would be Des Lynam and John Motson. I think Motty is an incredible professional. I just thought that Des Lynam was a consummate professional, very chilled-out and relaxed. You can always name and reel off some famous names that are inspiration, but I think for me it’s the guys that work behind the scenes at BBC Sport.”

STAR IN THE CAR

At the tender age of 30, Jake has got a lot of mileage left yet in his career. Having been involved in so many landmark sporting events already, is there anything left for the Norwich fan to achieve?

“The London 2012 Olympics is going to be the biggest sporting event of any of our lifetimes. We should all be so delighted and honoured that the Olympics is going to be here in our capital city. I would love to be one of the presenters for that. That would be my second Olympics and hopefully I would have done a few years of Formula One by then.

“I'm just interested in having a long career and being in BBC Sport. I'd love to present Top Gear. Hopefully through Formula One I will have some involvement in it, perhaps the Star in the Car, I'd like to go on there as a guest. I'm not sure how fast I would be though that's the problem! I'd like to beat Jay Kay and stick myself at the top of the leader board!”

The Formula One season returns on the BBC this weekend. Read Jake’s BBC Formula One blog exclusively here.