NO BELLAMY? GIVE BOJ THE SHOUT... 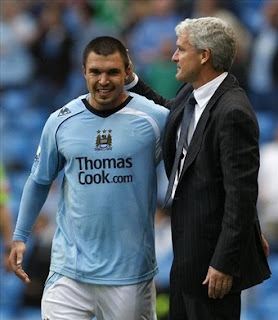 With Craig Bellamy out for around three weeks with a knee injury, I think Mark Hughes should give a welcome debut on his return from injury to popular striker Valeri Bojinov. Bonijov's time at City has been plagued by injury, but City fans are aware of the potential the striker does possess, as demonstrated with the Bulgarian's strike against AC Milan during pre-season. He isn't fully match-fit, but with options limited for Hughes, will Bojinov feature tonight against Aston Villa? I for one, certainly hope so.