CITY BEAT THE CHAMPIONS OF EUROPE 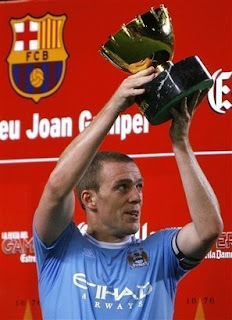 Okay, okay, so it was only a friendly, but there is no harm in gloating over the fact that City beat Barcelona 1-0 to win the Joan Gamper Trophy at the Nou Camp.
In front of a capacity crowd, the Spanish side dominated for long periods, but it was City who took the lead through Martin Petrov in the 28th minute. Barca’s summer signing Zlatan Ibrahimovic even made an appearance but Mark Hughes’ men held out for an unprecedented victory.
Barcelona’s coach Pep Guardiola praised City’s ventures.
"City are a team with big stars and we knew it would be difficult.
"They scored a goal and almost scored another at the end, but we had our chances too and it was a good match," he added.