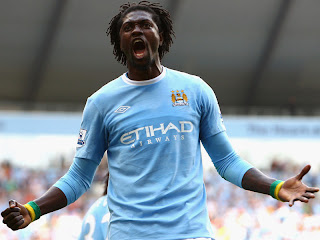 Sometimes it’s quite difficult to write about football without dropping in a couple of clichés, but I think I can get away with ‘a game of two halves’ in this article. Manchester City arrived onto the pitch at Eastlands in front of a spectacular sell-out crowd in the blazing northern sunshine; the air was filled with anticipation and excitement. The dawn of a new blue era was upon the City faithful- and the debut fixture at home against Wolves was one of the hottest seats in town.
City’s new superstars featured across the pitch: Kolo Toure started in defence with Gareth Barry controlling the midfield and the daunting duo of Emmanuel Adebayor and Carlos Tevez started upfront. Within minutes of the kick-off, Wolves looked more like rabbits caught in the headlights. Wave upon wave of City attack stunned the visitors and it wasn’t long before the deadlock was broken. Tevez provided the assist for Adebayor to slot the ball home clinically past Wayne Hennessey.
Mark Hughes’ men could have been five up before the interval, such was the dominance of City, with chances going amiss for Robinho, Tevez, Barry and Adebayor. But the one-goal lead was always slender and Shay Given kept the advantage intact with a superb save just before the break from Matthew Jarvis.
It was a warning shot that, despite the complete dominance and unequivocal possession statistics that favoured the home side, the lead was precarious. More chances came and went for City from Stephen Ireland and Adebayor, and Robinho even put the ball in the net but it was ruled out for off-side. But Wolves came back to bite with a vengeance that almost made City rue their plethora of missed chances when Andy Keogh’s stinging effort crashed off the crossbar. Mick McCarthy’s team finished with a flourish that had the substantial home crowd biting their fingernails, as has been the case so many times in the past, but they couldn’t find the equaliser.
Garry Cook had mentioned during the summer that he wanted to dispel the popular saying ‘typical City’ from the club. But as I walked out of the City of Manchester Stadium, that’s all I could hear being uttered around me. ‘Typical City’, we almost threw away two points despite the vast quantity of chances throughout the 90 minutes. The faces on the pitch may have changed, but the game should have been comprehensively killed off. But that was City’s fourth win on the bounce (counting victories against Celtic and Barcelona), and the third clean sheet in a row. Consistency was certainly hard to come by last year...could it have finally been found?