WILL HE STAY OR WILL HE GO? THE MOYES MADNESS GOES ON 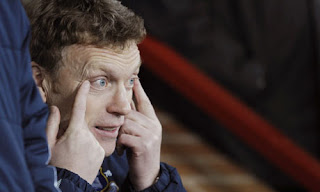 I’m quite baffled at the whole situation regarding the Joleon Lescott saga. I first thought that David Moyes was right to reject City’s initial bid if he really wanted to keep hold of his prized defender. That was all well and good. The second bid came in from City and was also rejected. Moyes was becoming more and more frustrated and his responses quite abrupt and almost venomous. Mark Hughes remained persistent and confident in acquiring Lescott’s services at Eastlands. Lescott has since had a transfer request turned down and been dropped from the squad in their Europa League qualifying tie against Sigma Olomouc.
But now it is almost as if the spat has hit a raw nerve as far as Moyes is concerned. The 6-1 drubbing against Arsenal at Goodison Park on Saturday was shocking evidence that perhaps the Lescott situation is over-shadowing the football club. Moyes has admitted that the defender’s head just wasn’t in the game, so as a professional football manager shouldn’t he have been aware of that before kick-off and not played him?
“He wasn't (right) before Saturday's game and he told me that,” Moyes stated.
“I took the risk and chose to play him. But now the time is right to leave him alone until things are sorted, and hopefully that will be after the deadline."
But in an interesting and almost contradictory twist, Moyes added that a route out of Goodison Park may still be possible for the 27 year-old.
"The door is open for Joleon. We don't want him to go, I have said that all along, unless we get an offer that I think is right.”
I think that Moyes has handled the situation wrong. I understand that Lescott is under contract at Goodison Park and that selling to one of his rivals is something that the Scotsman is very reluctant to do. But his side need the cash and the player wants out. Take the money. This transfer fiasco has to be resolved one way or another in the next 12 days...will he stay or will he go?