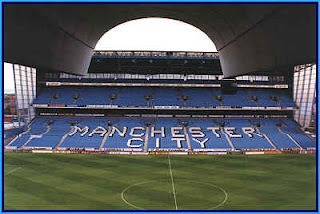 'One Moment In Time'

‘One Moment In Time’ is a nostalgic look back at events and occasions in City’s past that will no doubt resurrect many impassioned memories for most City fans. Written from my personal point of view, I am hoping that reliving these moments, whether they were good or bad, will prove to be an enjoyable read for all. This month...drawing Wigan in the 1998/99 play-offs.

The one positive that City could take from the Millwall game was the result- a 3-0 victory meant that City were back on the promotion trail. Although we wouldn’t be winning the league (Kevin Keegan’s Fulham were runaway winners of that), there was an opportunity to gain Division One status via. the play-offs. The play-offs were renowned for being somewhat of a lottery. Three days are all that stood in the way of your team gaining promotion, with the final one being a trip to Wembley.
A lot of people regard the play-offs as the hardest way of being promoted, but many saw the chance of a day out to Wembley too good too miss. But for all concerned, getting out of Division Two was the only option for City.

On the pitch the blues made steady progress. A 6-0 win at Turf Moor against Burnley was the highlight of the second half of the season that saw City elevate from seventh to third- firmly in the play-offs. The final home game of the season, against York City, saw Joe Royle’s men confirm third spot. Kevin Horlock, Paul Dickov, Danny Allsopp and Jeff Whitley all scored as City beat the visitors 4-0, the irony being that the win meant possible promotion for City and definite relegation for York. I didn’t feel elated, I felt relieved. Excited. The season was over- but it was only just beginning.
The final league positions saw us drawn in the play-off semi finals against our local rivals Wigan Athletic. They had finished sixth after a run of consecutive results and we had to play them at their ground, Springfield Park, in the first leg. On paper it was looking good. City had beaten the Latics home and away in the league- both times 1-0. It felt like we had booked our seats at Wembley- but just not received the tickets.
Springfield Park had a capacity of approximately 5,500 which made it extra difficult to get tickets. Impossible in fact. Luckily, Maine Road played host to a ‘screening’, with a huge television screen taking up place on the pitch, beaming the match back live to the Kippax audience.
The joy quickly turned to embarrassment. After only two minutes, Wigan’s top scorer Stuart Barlow capitalised on a misunderstanding between Nicky Weaver and Gerard Wiekens, scoring possibly the easiest and potentially most important goal he would ever score. Here we go again, I thought. Most people in the Kippax had barely sat down and City were already behind. It was a huge blow. Surely an equaliser wouldn’t be far away, would it?
As the match progressed, it was pretty much end to end stuff. Michael Brown and Gareth Taylor went close for City and Andy Liddell could have settled it for the Latics. Hope was fading fast between us blues. Then it came. The equaliser. Paul Dickov found the net to score and level the tie, bringing Wigan to Maine Road for the second leg with the situation all square. Chants of ‘North Stand give us a song’ eased the tension and most blues left Maine Road reasonably satisfied and eagerly anticipating the return leg.
19th May 1999 and Maine Road was buzzing. Not only was it a warm spring night it was ‘flag day’ at City, as well as being the match that would decide the club’s future- staying down or possibly going up on the road to recovery. Wembley or Wycombe. Disaster or delirium. I was so excited. The atmosphere was absolutely electric and the air of anticipation was immense. People were partying before the teams had run out. I could sense that this was going to be a special evening.
Nerves were high and both teams were more than matching each other. With so much at stake, neither side could afford to slip up and give anything away. I had some really rowdy men behind me, who were constantly jumping on their seats and landing on me. The spirit and expectation was unbelievable and then came something to really shout about. The breakthrough. The goal. City youngster Brown crossed the ball in and our very own Bermudan superstar Shaun Goater saw the ball into the back of the net. I say saw, because there was a big shout for hand-ball. Who cares? 1-0 City. 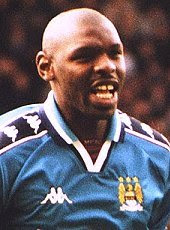 I screamed when I saw the net bulge. I jumped around, almost crying, mostly making an arse of myself, but so did 30,000 others who shared that moment with me. City were in the driving seat, but now they had to avoid any obstacles that Wigan may put in their path, and it was unbelievably tense. During the last five minutes Wigan pressed forward, they even hit the crossbar. Every City fan had all of their fingers crossed- hoping, wishing, even praying. It was like a communal church, with every blue praying for the final whistle. ‘Blow it!’ we screamed. We were heckling at the referee as the City players fought to clear the ball once more. My ears were ringing from the deafening shouts and mock whistling. My heart was in my mouth.
Toot toot toot! There it was- the end of the 94 minutes. An almighty roar engulfed Maine Road as everybody ran onto the pitch. I was itching to join in the fun so I hurdled over seats and ran with reckless abandon onto the scene of victory. I had never witnessed anything like it. The P.A. announcer’s pleas to vacate the pitch went unnoticed as grown men cried with joy, kissing the pitch. I let myself drop to the ground and I lay on my back, gazing at the stars in the cloudless sky. It was a magical moment. The stench of moist grass filled my lungs and I looked around at the scenes of ecstasy. The chant of ‘Wem-ber-ley’ echoed around the stadium.
I got to my feet and spun around, looking at each stand. The Kippax (my home), the North stand, the Main stand and the Platt Lane end. I ran along the touchline, cut into midfield and into the box, me and my imaginary football. I scored the goal of the season that night! It was alright to dream on that warm Wednesday evening, but we all went home believing as well. The famous Manchester City were off to Wembley.