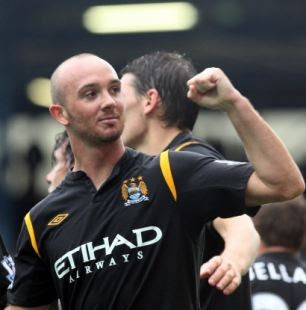 I previously spoke about how Sam Allardyce’s side can be both stubborn and tenacious and shouldn’t really be underestimated. City’s visit to Ewood Park could have posed a potential banana skin, but instead proved to be an excellent start to the season. Not only was the 2-0 victory a clean sheet away from home, but it also demonstrated how crucial a number of Mark Hughes’ summer investments will be throughout the season and beyond.
Gareth Barry had an excellent game in midfield, providing an important steel to the front of City’s defence and also linking up well in attack when the blues countered. Kolo Toure was partnered in the heart of defence with Richard Dunne and together they both had a superb 90 minutes, frustrating Jason Roberts and Benni McCarthy with their steely presence and stubborn work ethic. Emmanuel Adebayor’s goal was further evidence of the quality of football that City’s new faces are capable of achieving. Although the partnership with Craig Bellamy was a slight mis-match, Hughes will be able to experiment and discover which two target men are best upfront and Adebayor will be only too happy to add to that welcome selection headache.
Carlos Tevez left the Stretford side of Manchester for guaranteed first-team football at City but started from the bench, with Hughes still aware of his lack of match fitness. Yet when he replaced Robinho, who played well but still seems to suffer from travel sickness, Tevez looked sharp, effective and industrious. The new boys all certainly impressed and their presence and calibre combined fluidly with the relative ‘old boys’. Stephen Ireland, City’s reigning Player of the Season looked just as impressive and sealed the victory with a composed and assured goal.
The overall performance, particularly the second half, was clinical and comprehensive. The visitors were forced to withstand attacks from Allardyce’s men, but never particularly looked on the ropes. It was a vast improvement from last season’s calamitous away days, with City looking confident, combining the important elements of steel and flair to full effect. Shay Given pulled off a couple of outstanding saves to protect his side’s clean sheet and the question that City fans will want answering now is whether that all-important consistency can be achieved, and maintained.