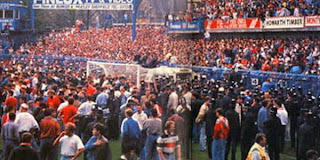 "Some people think football is a matter of life and death. I assure you, it's much more serious than that"...Bill Shankly

It was the day before my seventh birthday, a gorgeous Spring day. The sun was beaming down and my street was full of all my neighbours’ children playing out with me on their bicycles. The age of innocence was high; back in the eighties we would leave our house doors unlocked and go between each others’ houses without a second thought. It literally was a perfect day.
I fell off my bike a couple of times onto the moist, warm grass of my front garden and I looked up at the bright blue sky, littered sporadically with cumulus clouds. My friend Kerry ran over, offering me a daisy chain as a reward for my calamitous fall. We laughed and giggled and continued our hazardous bike adventures up and down the street.
I noticed my brother, Simon, playing football with his friend not far away from us. He was nine years old at the time and obsessed with the sport, sharing a love for Manchester City due to our obsessive uncle Bob. But he will watch any game of football at any time. I looked up to Simon, I still do. I see him as a role model and when I was younger I was influenced dramatically by his interests and hobbies.
INTRIGUED
Although I didn’t kick a ball about with him, football was beginning to intrigue me. I didn’t understand any of the rules but I knew the difference between Everton and Chelsea. I knew the absolute basics. I was always more into football than I was Barbie which at the time was a very rare commodity. I was a tomboy in that sense and I followed Simon like a shadow, which must have irritated him considerably, but has proved dividends now.
We had watched Grandstand that day, the old BBC Saturday sport programme and they reviewed the F.A. Cup semi final, between Liverpool and Nottingham Forest that was taking place at Sheffield Wednesday’s ground Hillsborough. Simon always got excited about the F.A. Cup and the semi final tie was the motivation for his kick-about, visualising being John Barnes and scoring the winning goal.
It was just minutes before kick off; mum was inside doing a vast amount of ironing and I was skipping outside. My carefree moments were about to come to a sudden halt. Amongst the tranquillity outside, my mum’s panic-stricken shouting echoed around the street. She was urging us inside, pointing at the television, open-mouthed, her eyes frozen in terror.

I think with the beauty of hindsight she called us in because my dad was at work and she had nobody to share her shock with. Simon and I were only young and didn’t really know what was going on. But I can relay the images of a crowd almost swaying, a mass of people crammed into a stand with some of them attempting to either climb over the perimeter fence or up onto the next tier at the ground. 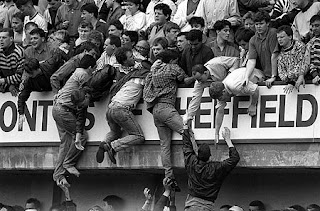 Unbeknown to me, what I was witnessing was the tragic events unfolding at Hillsborough. Simon sunk to his knees, glued to the television. This wasn’t football, this was people dying. People who had travelled from Liverpool to Sheffield to watch their team participate in a respected and traditional competition were being suffocated, their lives abruptly ended. I couldn’t understand why and how it was happening. I just recall thinking about the fences, the enormous crowd and the faces. The faces will haunt me forever.

TRAUMA
John Motson’s voice delivered details of a helpline number set up for families of potential victims to call for further details. I was crying, sobbing uncontrollably. It was my first real memory of football, yet it didn’t involve a ball being kicked or a player sent off. It involved fans and trauma. It was a horrifically dark hour. My mum lifted me up and consoled me, realising that she should have perhaps censored me from the graphic images. But those images were real and raw, they were happening live. Nobody could have forecast what happened that fateful day.
Since that day I have suffered from nightmares regularly. The images of that day, from the overcrowded Leppings Lane End have forever stuck in my mind and I pay my respects on every anniversary of Hillsborough to the 96 innocent lives that were lost in such an unnecessary manner. I now watch football every week and can understand and appreciate the severity of the events and the sadness of the needless loss of life endured.

I went to Hillsborough for an away match with my own team Manchester City in 2002 and, despite our 6-2 victory, all I could think about was that tragic April day. I went to the toilets at half-time and they were empty. I felt an eerie uncomfortable sensation in the darkened room and I hurried while washing my hands. The toilets were old and I was constantly thinking about just what happened above my head that Saturday, what sights the toilets could have seen during that despicable day. I was alone in the toilets yet I felt eyes on me. I was completely spooked and felt nauseous. 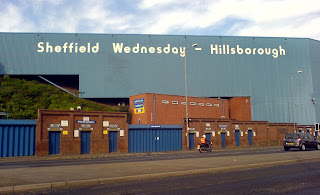 It may well be 20 years since the event but I will never forget Hillsborough. Every year I will observe the silence. It inexplicably affected me more than it should. But we are all part of the football family; people whose lives are driven by the sport and we hurt when events such as the tragedy in Sheffield occur. The victims were united behind their football team but should never have lost their lives supporting them. An occasion where Bill Shankly’s famous ‘football/life’ quote proved to be vacant, meaningless, without substance. Football lost its relevance after that day, I’m not sure if it’s ever been found ever since.